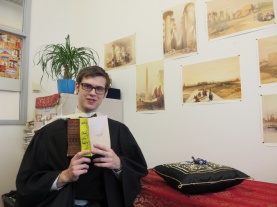 "I have a double major of Philosophy and Religious Studies, and have minored in Arabic.

Arabic fit well with my program, a lot of the courses for my Religious Studies program being cross listed with Arabic, such as Introduction to Arabic culture, and any course that is about or relates to Islam or the Middle East. Also a lot of the required readings for my Religious Studies courses were written originally in Arabic, and so a background understanding of Arabic helped a lot with studying these texts. Texts such as the Qur’an and the famous works for Muslim philosophers like Al-Ghazali were required for many of my courses, and I had the ability to read the original writing and compare it with the English.

I had studied Arabic before arriving at University, during my travels to Egypt. I traveled to this country as an experiment to study Arabic and Arab culture and explore the country. This was where I first became interested in the Arabic language. In Egypt I studied the Egyptian Dialect of Arabic at a small school in Alexandria. This was very unique and interesting because I rented an apartment nearby and lived as much like an Egyptian as was possible, and opened up opportunities for interesting language learning experiences. My roommate did not speak any English at all, so in order to get over the language barrier I learned to read and write Arabic, so I could communicate through writing, and maybe write English words phonetically so he would learn them. However I soon learned he was illiterate and then had to teach him to read Arabic to teach him to speak English. Of course in the end I ended up learning Arabic to communicate.  My education in Egypt was exclusively in the dialect of that country, and so the opportunity to study Modern Standard Arabic at Dalhousie was very helpful.  I began in the intermediate course instead of the beginner’s course because of my background in Arabic.

After the intermediate course, my understanding of Arabic was accelerated considerably, and I knew I wanted to be involved with Arabic at Dalhousie as much as possible. Dr. Firanescu's unique teaching style blended studying Arabic with speaking and listening to the language in class, which helped me learn the grammar (something I did not learn enough of in Egypt) and with adapting to the differences of pronunciation from Egyptian Dialect to Standard. Professor Firanescu was also among the most available of my professors for help with the tests and assignments, and any questions in general I had about Arabic language.

I had lots of help with the Arabic language from Arab students at Dalhousie, I also have conversation partners in the Middle East, some that I met while in Egypt. Many of my friends from Egypt remain in touch, but I have also met many more conversation partners online in the Arabic countries. In my last year of University I decided to begin an Arabic Studies Society at Dal. Unfortunately, it was too late to get the Society completely off its feet, but I have left a facebook page and some willing participants, so inshallah it will be taken up by future students with a similar passion for the Arabic language.

For those who are contemplating studying Arabic or are in the beginners’ class I would recommend highly continuing with your study of Lady Arabic. It will be challenging, and it will not come easy, you will have to practice and seek the help of others. But more so than anything else you learn, Arabic will expand your mind. Every course in your university career will teach you new things, but when you learn another language as unique and different from English as Arabic, you learn to describe the world differently, and see the world differently.  Arabic is not just another language it is another paradigm. It is elegant and poetic, powerful and passionate, if you give effort to learning it, it will reward you richly. It is a new way of expressing yourself, and therefore a new way of discovering yourself." 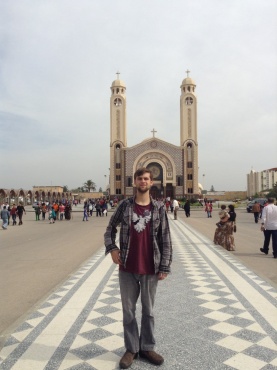 Stephen in front of the Monastery Mar (Saint) Mina

A year after his graduation, Steve is back on the web with wonderful news on his progress with refining his Arabic in a very attractive, yet challenging manner, that he enthusiastically talks about… Thank you, Steve, for sharing your unique experience! Always keep in touch and inspire new generations of Arabic learners! Our best wishes of success in your work and studies, and for a positive, enriching Egyptian experience.  We hope to see you visiting Dal and meeting with students… Hopefully next Spring?!

It’s been almost a year now since my last class in Arabic at Dalhousie, and the passion for Arabic I developed there has fuelled my endeavors since then. Soon after the summer of my graduation, I travelled to Egypt, to Alexandria, to teach English while continuing my study of Arabic. I had been to Alexandria before for a short visit, and I really wanted to experience the “pearl of the Mediterranean” once more. At the beginning it seemed like it may be difficult, lots of the news from Egypt seemed negative and many people (including travel insurance companies) seemed to think the country was in crisis and it would be too dangerous. But the Egyptians have a saying, roughly translated that “one who tastes the Nile will always come back to it”. So I took the risk and travelled to the country I had missed for 5 years. My experience has been a breathtaking adventure since then. I have been treated with hospitality and generosity and haven’t once felt unsafe.

I have continued studying Arabic in Egypt, both the local dialect and Modern standard. The local dialect is smooth and flows easily, and is full of amusing idioms, witty sayings, and interesting linguistic developments and borrowings from other languages and cultures representative of the long history of Egypt. Standard Arabic is eloquent and beautiful, its name in Arabic literally means “the most elequent” (al-fushaa). Its grammar is very rigorous and systematized, and studying it has been both a challenge and a pleasure. It requires much study and attention, but naturally falls into poetry and elegant rhymes. It’s also the written and media language in Arabic, and understanding it is necessary to follow the news and literature, the most important words in Arabic are written in Modern standard.

I’ve also gotten to visit some of the world’s most historic and renowned sites. I’ve travelled to ancient pharonic temples and tombs, sat and rested in the serenity of 1700 year old sanctuaries, and marveled at towering minarets built by medieval dynasties. My journey with Arabic began at Dalhousie under the rigorous yet patient education of Dr. Firanescu, and has continued here in Egypt. In sha'a Allah it will continue next year, as I begin studies in translation, and eventually pursue graduate studies in Arabic. I could not imagine a more exciting and enriching post graduate life, and my Arabic study at Dalhousie is a large part of what set me on this path. 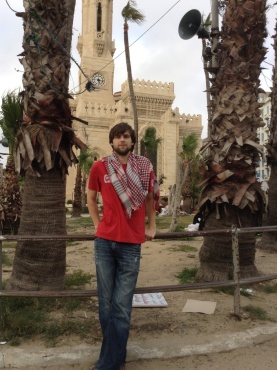 By the Qaid Ibrahim Mosque 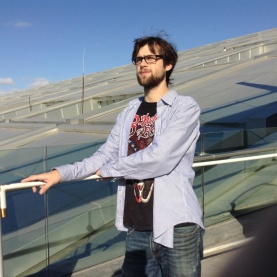 Beside the Library of Alexandria