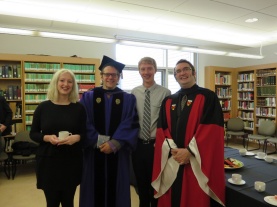 "I just received a dual honours bachelor in Contemporary Studies and Religious Studies. I have taken many classes that were cross listed with Religious Studies and Classics, but specifically Classics classes included Dr. Diamond’s Socrates on Trial and Plato & Aristotle, and Dr. Hankey’s Hellenism up to Philo the Jew.

I started studying Arabic after learning the essential role that it played in the translation of ancient Greek thought, in the medieval period, in the Foundation Year Program and King’s College. Thoughts about a hitherto completely unknown culture were taken up when I picked Religious Studies as one of my two major disciplines. I also wanted to complement my very academic degree with practical knowledge in an ever evolving language and cultural landscape, and so Arabic was much more appealing than Latin or Greek. Mostly, I wanted to engage with a part of my world’s intellectual legacy that had been ignored and popularly conflated as completely foreign. It brought my sometimes dry degree alive and has opened up access to much more of the world. It has been the perfect addition to my degree.

After the beginner level, I wanted to learn more because I realized how much of a surface impression I had made on such an intricate language. I was genuinely interested and engaged with learning it, and, since it had been the most interesting class I had taken until then, I wanted to keep it as part of my course load to stimulate my interest in my studies. There was no real plan until intermediate, when I felt it necessary to go to the Middle East and engage with the spoken language on a daily basis to begin to grasp it.

If I was "fated" to learn Arabic? Rodica, I can tell that you wrote this question to get a real off the cuff answer. Yes, and no. I could have continued with German in High School, but I didn’t. For some reason, Arabic stuck. Whenever I mention it to other people, they remark how strange and random it is for me to be studying Arabic. From their perspective, it could only be a personal and deliberate choice that would make me take up my studies. But from my perspective, there was always a certain desire to engage with unknowns – people and ideas considered to be outside of my own life’s particular context. The best that I can say is that Arabic came into my life and engaged with me on a level strong enough to become an important part of my life.

Such much of my experience with Arabic has come through travelling and studying abroad. Last summer I studied at the Centre for International Learning in Muscat, Oman, which revolutionized the way I viewed my studies. It brought the language alive. It was a program in which I was in class much of the time, but also adventured with friends and by myself around the country. It took my basic understanding of the language, and challenged it so it had to grow. It was a real inspiration to continue down the path of studying Arabic. I remember it quite fondly, and was a life-changing experience.

I do have Arab friends – my communication with them is on average 70% English. This is due to familiarity with some, and a complete language barrier with others, who speak dialects that I don't know. I find that if they know English, they are more than willing to speak English.

I want Arabic to remain a major part of my life, so I hope that it is included in some way, shape or form. My plans are to travel to the Arab world and remain there for as long as I am capable in order to get a better grasp on the language. Basically, my short term future is surrounded with engaging more with the language.

My Arabic education from Rodica at Dalhousie has changed my life for the better. It gave me the keys to open many different doors in other contexts of my life, and the courage to pursue them. My Dal education was extremely practical and gave me the grammatical tools necessary to grasp a language with completely different grammar, syntax and vocabulary. It lit a fire in my mind and soul to continue down a difficult path. Like any other class, you get out of it what you put in. The more I’ve poured into my Arabic studies, the greater rewards I found. It has been the most rewarding part of my degree. It brought an academic degree out of the academy and across the world, and has given me great context for many different parts of my life." 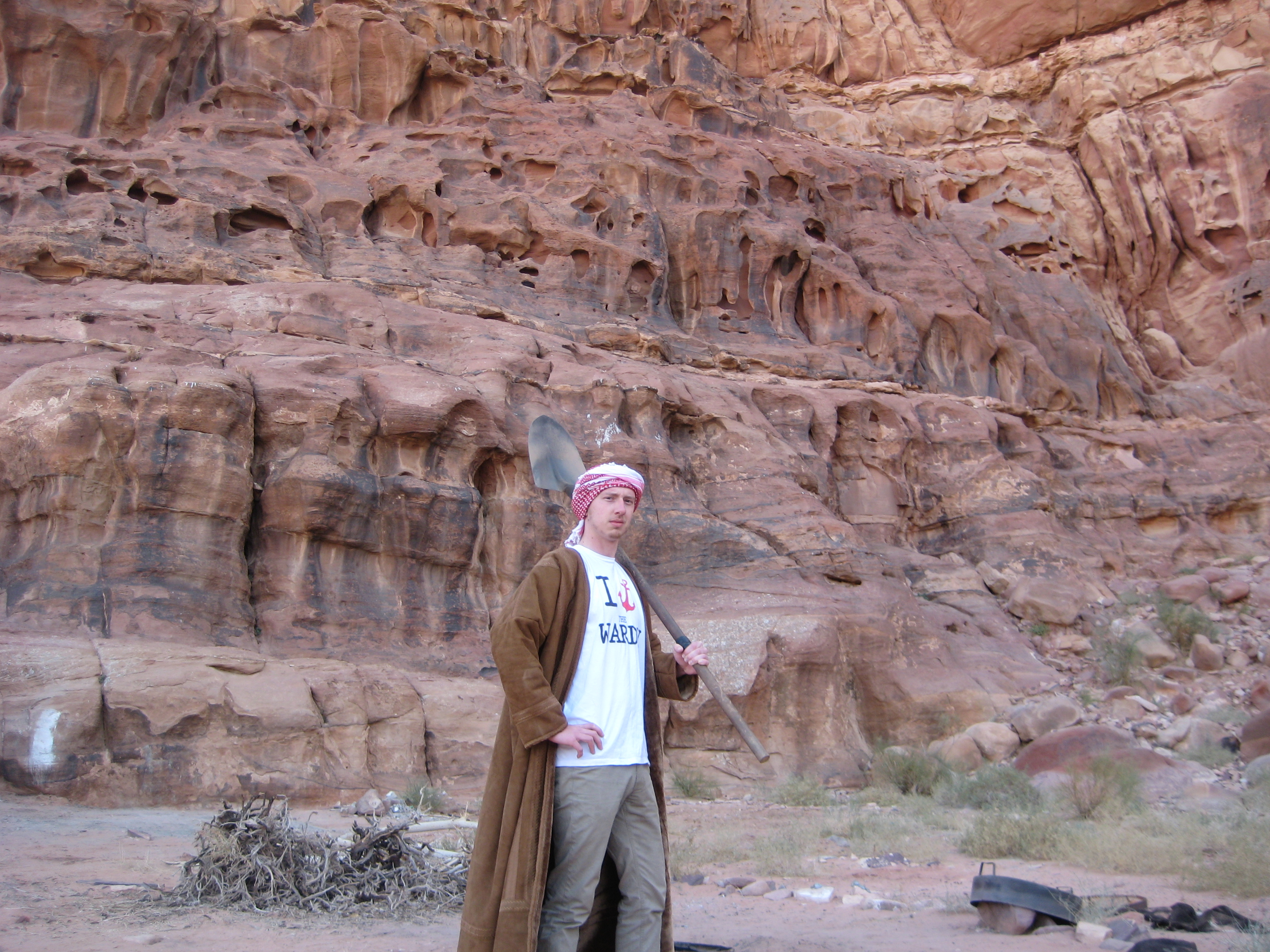 Masa' al-kayr from snowy (believe it or not!) Amman!

The city has been shut down for the last few days because of 10cms of snow, which for Nova Scotia probably seems like a total joke right now. I'd say I miss Canada, but from the news i've heard about the weather, that would be a bold faced lie.

I've been on the road, living mostly in Jordan for the past 5 months, and words can't describe all the changes in my life, and my Arabic! I volunteered for 3 months in Wadi Rum with the Zalabeyh Bedouin tribe, working for a tourism company. Life in the desert isn't the easiest, but it was a life-changing experience in the desert. Camel races, hunting, reading lots of books, long treks through the sand on foot and by camel, eating mensaf and climbing mountains for 3 months was perfect after 5 years of studying. Rum only has about 1000 people, and they're all related, so while sometimes it was confusing to understand how everyone was cousins and related to each other. It was great to be in such a strong community - very different from life in Canada, where everyone prides themselves on independence. I learned so much besides Arabic - how to be happy and have fun without a lot of entertainment around you, how to enjoy the basic things in life, how to stop checking my phone constantly and to stop worrying about social status and enjoy the time that you have, and the people around you.

The Jordanian people are incredibly kind and welcoming to show off their country, and help those in need. When I went down to Aqaba to get my visa updated, I was having trouble finding the police station. I went into an air conditioning repair store for help, and they led me by the hand, took me in their car, waited 30 minutes and even had coffee waiting for me. I believe half of the reason was that I could speak Arabic - it really is an advantage. It distinguishes you from the rest of the tourists, and the people here find it hilarious and endearing.

After I finished in Rum, I traveled with my dad for 5 weeks - Israel, Palestine, and Turkey. It was totally bizarre to see so many places after so long in desert, but wonderful to go to them. Of all of them, my favourite by far was Palestine. As much as you read about life there, it’s really nothing until you go there and see it for yourself. The people there were just like in Jordan - kind, warm, friendly, helpful- even under the constant looming spectre of military occupation, home demolitions, water cuts, land lost to settlement, checkpoints and security barriers. Year by year life gets a little bit harder for people just to get by on a day to day basis, let alone make long term plans. But the courage and strength that people have there was truly amazing. They make a lot out of what they have, and look out for each other. I was only there for a week, but it significantly changed how I look at the world.

To hear and use Arabic on a daily basis really changed how I look at the language. First of all, I had to get down the basics of different dialects (from Jordan, Palestine, Egypt and Bedu - all of them with similarities and differences), as well as more every day words surrounding cooking, cleaning, helping with guests and adjectives to describe myself and the environment around me. Many times I was very grateful for all the grammar I had learned in school so that side of language wasn't difficult at all. What was very tough though was listening and vocabulary. It took a couple of months of trying to learn very hard before listening to a conversation became more normal. Also, vocabulary was an endless challenge. Very quickly I found that I couldn't focus on every single word in a sentence, but try to listen to all of it together and sift through it to find its meaning. Vocab still remains a challenge - you really have to read as much as you can every day and expose yourself to more and more until it becomes easier.

For the last few weeks, I've been at an immersion school in Amman, called the Ewan Institute. It’s fantastic to be back in class again and have a little structured learning, and it also forces me to go beyond my limits and try more and more every day.

If you really want to make a go at learning Arabic (especially for someone like me, who started with zero background or familiarity), you gotta do anything you can. Every day, do a little something different or new. Read a newspaper, read a book, watch TV, listen to the radio, ANYTHING. 15 minutes a day will go a long way to help absorbing everything, especially if you're living outside the Arab world. " 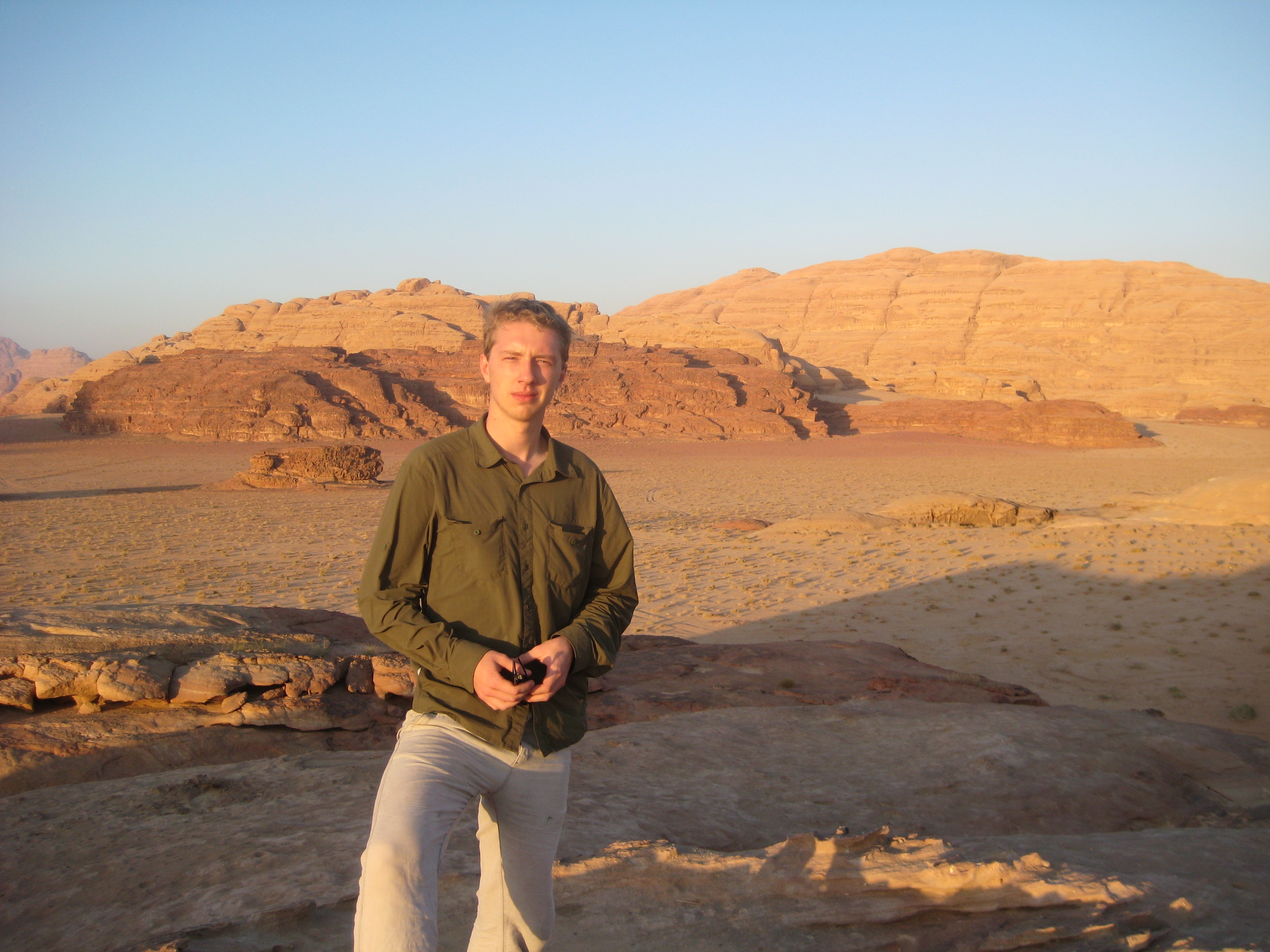