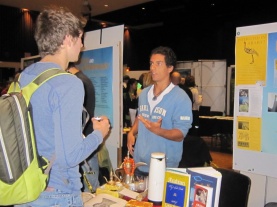 "I have recently graduated with a Bachelor of Arts Double Major in History & Linguistics. My degree in Linguistics allowed me to use Arabic Courses to count as credits toward the Linguistics area of my degree.

I chose to study Arabic as a means of communication with different cultures and people. I was determined to study Languages and to use them to build bridges between cultures different from my own.

I was determined to learn the Arabic language to the highest ability that it was offered at the University of Dalhousie (although I am technically graduating from the University of King's College) and my plan was to learn it well enough to communicate competently in Arabic with native Arabic speakers.

Fated is a strong word, but I believe learning Arabic has allowed me to bridge the gap that language creates between people and to understand people from different cultures in a way that I would otherwise be unable to do.

I travelled to and worked in Jordan last year in order to improve my ability to communicate in Arabic. To live and work with native Arabic speakers was a great benefit to my speaking and comprehension of the Arabic culture. I was able to understand the importance of Arabic language and how important was to learn a language to a level that allowed me to casually communicate in Arabic.

I had many classmates that were native Arabic speakers; they helped me communicate in Arabic and allowed me to continually add new words to my vocabulary and to communicate more effectively in Arabic.

My goal is to be able to be someone that could translate between Arabic and English and other languages. I think Arabic has a great part in my future and will allow me to help people understand one another through language.

Arabic is an extremely difficult language to learn. But it makes learning it all the more valuable; and to have teachers who cared so much about teaching Arabic as a language was invaluable. The goal of studying Arabic would not have been possible without the intense devotion that could be applied by both teachers and students in the Arabic Department.  Students should expect to be extremely confused at the grammar that comes with Arabic, but to understand how important it is towards a better world and better communication between cultures. Not many teachers will give so much intense devotion to students studying Arabic, and give them the tools they need to understand such a complicated language."