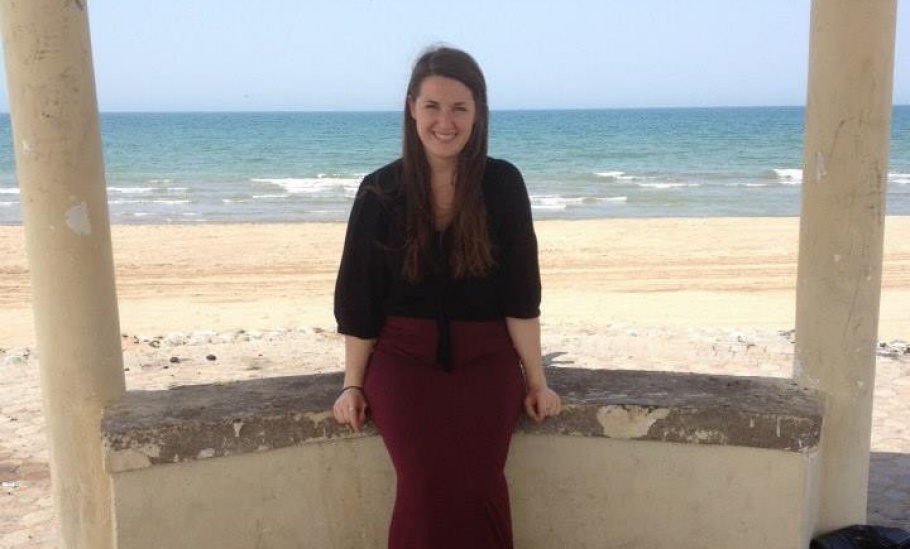 A word from Dr. Firanescu:

Briana is one of the most memorable students by her sparkling enthusiasm for Arabic and her tireless work to acquire it. Her start was rather timid as the language made her struggle (as it does with most beginners), but at the intermediate level I was delighted with her progress achieved through tenacious work. Then she had the courage and motivation to go in immersion in Oman, by taking a summer course that helped her enhance her command of the Standard Arabic and acquire new skills in the local dialect; besides the classes taken in the classroom, she lived with an Omani Bedouin tribe to learn not only language, but also  about customs, mentalities, traditions. She was back for the Advanced Arabic level that she took in Fall 2014, with outstanding results. Briana has been admitted to a Master's degree at the Munk School of Global Affairs, a field in which she is particularly interested. Her knowledge of French and Arabic promise to be a strong asset for building her future career in a world that is becoming increasingly globalizing and multicultural. Full success, dear Briana, and let us know about your exploits!

"I started studying Arabic because the culture and language intrigued me. Rodica is an amazing professor and a huge reason why I continued to take Arabic classes throughout my degree. She is the most memorable and engaged professor that I have encountered at Dalhousie.

After two years of studying Arabic with Rodica in the classroom, I studied abroad, in Oman, during the summer of 2014. I lived in an apartment in the city of Muscat and took Arabic classes for 4-6 hours a day from Sunday to Thursday at the Center for International Learning. It was challenging, but not "too" challenging. We enjoyed coffee breaks throughout the day and got to travel around the country during evenings and weekends (Friday-Saturday there).

The weather was HOT: usually 110-120F (45-50 C).Some of my best memories are from that summer. I rode a camel, camped on the beach and watched turtles lay their eggs, and camped on the sand dunes in Bidiyah.

I hiked up "Jebel Akhdar" (The Green Mountain) and saw an abandoned village there and ate a fresh pomegranate from a pomegranate tree. I went to Salalah - a beautiful oasis south of Muscat. I travelled around the region more generally too - I went to Dubai and India.

I fell in love with Oman and its people entirely. I even extended my departure date to be about 3 weeks longer so that I could live with a family I met that lived in Al-Qabil - the desert! It was there that I really learned things - I learned how to speak in dialect, how to eat with my hands (which is surprisingly hard), and how to live in a completely different way.

Learning Arabic made me want to learn as many languages as possible because it opened my eyes to a whole new way of life. (Language and culture are often barriers between people who are, at the base, very similar). My experience in Oman forever changed who I am and what my values are, and gave me direct exposure to a culture that had previously been foreign to me.

In summary, Arabic was not only the most interesting class that I've taken at Dalhousie, but it also led to amazing things. If you are someone who likes to learn about new places, new cultures, new people, and who likes to challenge yourself, this is the class for you!"