Alumni Stories of their Journey with Arabic 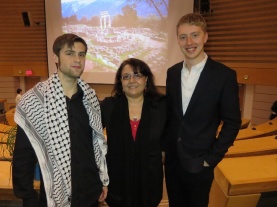 The young Minor in Arabic Studies has started being even more attractive to students; some have already declared it, and there are good omens that more will declare it in coming years. For some students who graduated in 2014, their journey with Arabic proves to acquire a deeper sense in their lives and merge with their prospective careers: Charlotte MacKeigan will start at Dal a Master's of Library and Information Studies, hoping to become a subject specialist for Arabic Studies. For John Maize, the journey with Arabic will continue, as he intends to integrate the knowledge of Arabic into his future profession. Stephen Wright and Cameron Mitchell plan as well to take Arabic to further levels, adding dialects…

The Advanced Arabic class 2014 was, I would say, exceptional. It included, among others, five senior students who developed a passion for Arabic, and took all the three levels: Charlotte MacKeigan, Joelline Girouard, Katherine Strynatka, Cameron Mitchell, and John Maize. Working with such enthusiastic students was so rewarding! Their love for Arabic inspired me, as a teacher, to give the best I have.

At the so successful Pythian Games, organized by the Department of Classics, last March, the audience was impressed with the delightful performance of two students who have minored in Arabic Studies: Stephen Wright and John Maize, "veterans" of the Arabic programme, who are not only passionate about the language, but fond lovers of the Arabic culture and literature. They recited poems in their own translation from Arabic, which emphasizes the excellent linguistic level they have acquired in years of struggling with this difficult language, as well as their intimate connection with the texts, which made their performance genuinely convincing and touching, and myself so happy and so proud of them! Steve stirred the audience's emotion by reciting with expressivity, pathos, and subtlety the famous poem "Record! I am an Arab", by the most prominent Palestinian poet Mahmoud Darwish; it was a delightful surprise  to discover his artistic talent! John (for the second time at the Pythian Games) impressed this time by his skillful interpretation of the poem "The Piano Concert" by the most famous Arab poet of the 20th century, the Syrian Nizar Qabbani; his scenic presence, that aroused the public's admiration, is due to the fact that John has been active in the King's College Theatrical Society, as a talented stage director and actor.

Here are the stories of their journey with Arabic, recounted by three dear alumni who happen to graduate all in 2014: John Maize, Stephen Wright, and Cameron Mitchell. (I hope that we'll never lose sight of them!).  I thank them all for the privilege of having them as talented, passionate students, and wish them great success in their lives!