Commercial battery cells contain tape — like Scotch tape — that holds electrodes together and chemical decomposition of it creates a molecule leading to self-discharge. (Bram Van Oost/Unsplash)

It happens far too often: you plug your laptop in and walk away only to return hours or days later to find it has lost some of its charge despite sitting idle and unused.

The phenomenon — called self-discharge — has frustrated users and industry alike, and puzzled manufacturers trying to determine why lithium-ion battery cells tend to lose some of their charge over time. 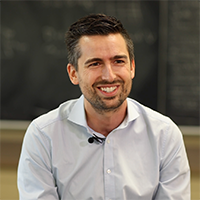 A researcher at Dalhousie has identified a surprisingly common culprit that, if replaced, could address an enduring problem for the industry.

"In commercial battery cells there is tape — like Scotch tape — that holds the electrodes together and there is a chemical decomposition of this tape, which creates a molecule that leads to the self-discharge," says Michael Metzger, an assistant professor and the Herzberg-Dahn chair and in the Department of Physics and Atmospheric Science.

"In our laboratory we do many highly complex experiments to improve batteries, but this time we discovered a very simple thing It's a very simple thing — it is in every plastic bottle and no one would have thought that this has such a huge impact on how the lithium-ion cells degrade."

Read the two studies, here and here, published in the Journal of The Electrochemical Society

Dr. Metzger and his colleagues wanted to understand why lithium-ion battery cells self-discharge. As part of their research, they opened several cells after exposing them to different temperatures.

They were stunned to see that the electrolyte solution in the cell was bright red, something they had never seen before.

They then began exploring the cause, placing cells with common electrolyte solution into ovens at four different temperatures. One at 25 C remained clear, while the sample at 55 C was light brown and the highest one at 70C was blood red. They did a chemical analysis and looked at the chemical composition of the electrolyte.

That's when they found that the polyethylene terephthalate, or PET, in the tape decomposes and creates the molecule that leads to the self-discharge. The molecule is called a redox shuttle because it can travel to the positive side of the electrode, then to the negative side and then back to the positive side. So, it shuttles between the electrodes and that creates the self-discharge, just like lithium is supposed to do. The problem is that the shuttle molecule is doing it all the time in the background, even when no lithium is supposed to move when the battery just sitting there.

"It's something we never expected because no one looks at these inactive components, these tapes and plastic foils in the battery cell but it really needs to be considered if you want to limit side reactions in the battery cell," he says of the tape made from PET, a strong, lightweight plastic used widely in packaging and pop bottles.

Recommended reading: Battery pioneers charge up with $6M NSERC Alliance Grant, the largest grant of its kind ever at Dal

The researchers outlined their findings in two new papers and are catching the attention of industrial heavyweights seeking ways to improve their batteries' performance.

Dr. Metzger recently visited a company in the States that relies on dependable, long-lasting batteries, and was asked about the tape issue after hearing about Dr. Metzger's novel discovery.

"The self-discharge is a super important metric for them," says Dr. Metzger. "One of the engineers said, 'I heard you guys found out something is wrong with PET tape.' So, I explained to him that it's causing this self-discharge and asked him, 'What are you using in your cells?' He said, 'PET tape.'"

The information could lead to a fix that might involve replacing the PET tape with a more stable material that won't degrade.

"It's a commercially relevant discovery. It's a small thing but it can definitely help improve battery cells," he says.

Recommended reading: Dal researcher receives $3.3M to revolutionize the way batteries are made