Michael Ungar only Canadian scholar in top 25 in journal ranking

Fifteen years ago, Dalhousie Social Work professor Michael Ungar says he struggled to get his work on the radar of the mental health establishment. Focused on transforming the understanding of what it takes to make people resilient, he ran up against assumed wisdom that people independently summoned the strength they need to thrive.

He didn’t see it that way.

“We were still thinking of highly individualized ideas of the concept of resilience,” says Dr. Ungar. “You know the terms grit, self-regulation, mindfulness, they’ve all become quite common. But the work we’re doing is different. We argue that it’s also about resources and service design — how we create societies also plays an important role in making people resilient. There’s a cultural lens that needs to be considered.”

A new focus on resilience

Today, the lens provided by Dr. Ungar’s research has come into focus for scholars around the world, a fact reflected in his newly publicized status as the world’s leading social work researcher based on the impact of his scholarly writing and citations. The ranking was published by the journal Research of Social Work Practice, which drew on a database of more than eight million scientists globally from every discipline and parsed out the top 100 researchers in the field of social work.

At number one, Dr. Ungar, who is Dalhousie’s Tier 1 Canada Research Chair in Child, Family and Community Resilience, was the only Canadian social work scholar to rank in the top 25.

“I knew my work was getting out there. I knew it was being read and read well, but I had no idea that it was having this kind of impact,” said Dr. Ungar, who learned about his top-ranked status from a colleague in South Africa.

“These ideas have clawed their way in. When I first started publishing, it was still difficult to get into the higher-impact scholarly journals because the ideas were bucking the normal trend of the conversation. So, it is a testament to the strength of the work and the colleagues and doctoral students I’ve worked with.” 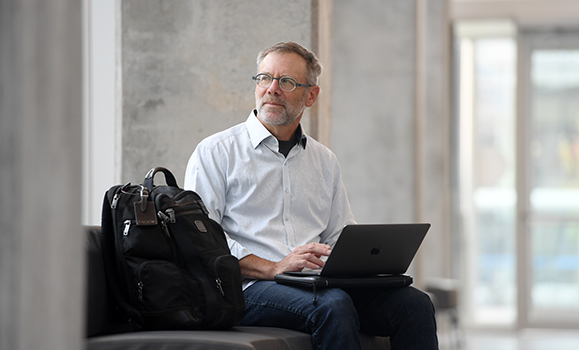 He says he knew his ideas were beginning to inform a new discourse in the global mental health community in 2020 when he was invited to write on resilience for Lancet Psychiatry, one of the world’s foremost medical journals. A “career crescendo,” he says, along with speaking opportunities with the National Institute of Mental Health, the leading American federal agency for research on mental disorders, the Robert Woods Johnson Foundation, and other important think-tanks.

At the centre of Dr. Ungar’s ideas about resilience is the assertion that outside factors play an integral role in an individual’s ability to muster the strength to take on the challenges of life. And that the supports people require are not standard across cultures, so the prescribed interventions need to be sensitive to a person’s background.

He uses an analogy focused on Cinderella to help him articulate his ideas. He says, Cinderella isn’t a story about a hard-done-by young woman. It’s actually a fairy godmother story.

“Everyone tells the tale of Cinderella from the point of view of the girl — her mother dies, father remarries, the evil stepmother — you know the story. She rises up, enchants the prince and lives happily ever after. But that isn’t what the story is about,” says Dr. Ungar.

For Dr. Ungar, it’s a story that has taken him around the world to explore what outside supports people need to help them draw on their inner resilience.

“We argue that there are cultural nuances to this,” he says. “What someone values as a resource for resilience in an Aboriginal family in Australia might be very different than a Tanzanian farmer, or a child growing up in poverty who is a first-generation Canadian in Vancouver, or in an oil and gas town that is going through decline in Northern Alberta.”

This global perspective is matched by his desire to see his work in the hands of fellow academics and practitioners around the world. This has driven a strategy to increase open access to his research to make it freely available. Last year, he published his 18th book, and paid the publisher, Oxford University Press, $30,000 to make the text globally accessible online as a downloadable PDF, forgoing any royalties the sales would have generated.

He says he’s happy to trade income for impact.

“It’s a book that is right on the cutting edge of the field, and if you want to influence a global conversation in science, sometimes you need to be a bit audacious, especially where there is a resistance to this conceptual space,” he says. “I was trying to make an argument and I thought, ‘Well if you really want to jumpstart the conversation, you’re going to have to be bold.’”

He says he owes his willingness to make work freely available for his first-place ranking, saying, “Part of this has been a very strategic use of resources and trying to find clever ways to get people the content. And I think that it’s kind of worked.”