With his new book Change Your World: The Science of Resilience and the True Path to Success, Michael Ungar is challenging misconceptions around the worlds of self-help and resilience.

Dr. Ungar, professor in the School of Social Work and a Canada Research Chair, is the director of the Resilience Research Centre at Dalhousie, which studies resilience around the world. 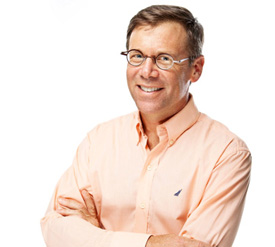 “The idea of the book was to take what we’re studying on a global scale and adapt it for a more popular audience to really challenge this mythic notion of the self-help industry,” says Dr. Ungar (pictured).

“When you say resilience, you're looking at how you can explain why people are doing better than expected when they are experiencing adversity or stress that is not typical in our lives. You try and understand the protective aspects of people’s lives. You’re asking, ‘What are the mechanisms, the processes that make it more likely that they’re going to do well under a lot of stress and adversity?’”

The book challenges what Dr. Ungar considers a “mythical idea”: the rugged individual that overcomes adversity through their own innate qualities.

“The science really doesn’t say that. It’s a popular idea because people like to believe that their lives are under their own control, even though that’s not entirely true.”

Dr. Ungar is hosting a book launch and lecture at the Halifax Central Library this Thursday evening (June 13) at 6:30 p.m.

The limits to “self-help”

According to Dr. Ungar, people often try to “tough it out” through bad situations instead of making things easier by changing their environment.

“If you are emphasizing self-help, then the implicit notion is that if you don’t do well, it’s just because you weren’t motivated,” he says. “’You didn’t put enough energy into your meditation practice,’ or, ‘you just didn’t take enough steps.’

“The science of resilience is beginning to understand that what makes us resilient isn’t just what’s inside of us, and that self-help Is a dead-end street in that regard. It’s really more about creating environments around us that will bring out our best.”

With Change Your World, Dr. Ungar hopes to help those in crisis realize that their situations are not entirely their fault.

“It’s safe to say that people who would probably pick up the book are those who are frustrated with their perceived inability of not being able to succeed using the self-help methods that are promoted and are looking for a different conversation.”

Moving the focus to the environments

He recalls an experience speaking at a nurses’ conference a few years ago, after which one of the attendees found him after his talk. “She said, ‘My bosses send us to these things and we’re told to meditate. I don’t want to meditate! I’ve got a stressful job, and frankly I’d rather if they’d just put more nurses on duty and change our schedules and change a few other things.’” 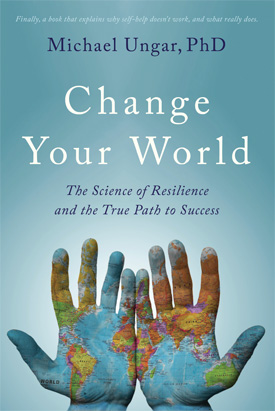 Stories like this aren’t unique, according to Dr. Ungar. “What’s been interesting about watching the comments online where the book’s been appearing and people affirming that they knew the self-help stuff wasn’t working. They knew it, but nobody was voicing it. They didn’t have the language to express ‘something’s not right, maybe it’s just me.’

“Guess what? There’s plenty of research to say why it’s not you. It’s actually that you are not the problem — the environment around you is conspiring to make this not work very well for you.”

He says that no matter how difficult it can seem to change our environment, there are always small practices you can institute to improve your resilience.

“I’ll often say an example that I love: the birthday person,” Ungar explains. “A lot of work teams have the birthday person, one person on the team that remembers everybody else’s birthday. And they have that job to bring in the cake or donuts. They make sure that someone is keeping track of everyone else’s well-being.

“These small efforts that somebody does are often what convey to us that we matter, that we’re embedded, that we have a culture, we have a space to be, that we’re treated fairly and socially justly. All these small incremental things are cumulative and they add up to making us do well.”

Change Your World: The Science of Resilience and the True Path to Success is out now from Sutherland House Press. Dr. Ungar’s book launch and lecture takes place at the Halifax Central Library Thursday evening (June 13) at 6:30 p.m. in the Lindsay Children’s Room.