Since a young age, Kris George, who grew up in the rural, fishing community of St. Margaret’s Bay, Nova Scotia, has been mindful of his place in the world, his interactions with society, and his interest in working with others. When he started his Bachelor of Arts degree at Dalhousie, he wasn’t sure what his plan was, as is the case of many students starting their first year. He was advised to explore his options and take a wide variety of courses to see what piqued his interest.

It wasn’t a big surprise to him that Sociology was the subject that really grasped him, considering his interest in working with and learning about people and what they do. (It didn't hurt that he got the top mark in his high school sociology class). So, he chose that as his major, with Economics as a minor.

As someone who spent years working as a cook in the restaurant industry, oftentimes juggling more than one job along with school, Kris has been mindful of people’s places in and contributions to the economy and also to the struggles that go along with working in an industry that often follows unusual working hours and how that impacts personal time. This experience is what influenced Kris’s undergraduate honours research on how kitchen workers used and conceptualized their leisure time.

Diving deeper into the labour economy

As his undergraduate honours degree was wrapping up, on recommendation from Dr. Laura Eramian, his honours supervisor, Dr. Fiona Martin, who was the graduate coordinator for the Department of Sociology and Social Anthropology at the time, reached out to ask if he’d be interested in pursuing master’s studies in sociology at Dalhousie.

“Throughout all of that I was never really sure what I was capable of,” says Kris. “I relied on my mentors and supervisors to tell me, ‘I think you can handle this’ and then I would be like, ‘ya know what, yes I can’.

With some encouragement from Dr. Karen Foster, an associate professor in the department who later became his thesis supervisor, he applied to the MA program and started in fall of 2018. 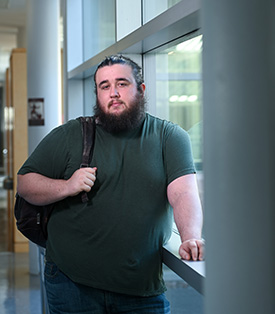 “He is constantly using ‘the sociological imagination’ to interpret the world around him,” says Dr. Foster. “It’s the quality we try to ignite in students through our classes, and Kris has had it since I met him in a second-year class in the Sociology of Work.”

Kris’s interest in researching the labour economy — as was demonstrated in his undergraduate work — carried over to his MA thesis topic on digital platforms and class conflict in the gig economy, focussing on Uber drivers who worked in the Greater Toronto Area.

Kris moved to Toronto in fall 2019 to begin his field work, an uncommon practice for MA researchers who typically collect data locally or electronically. He lived there, staying with friends for three weeks to collect his data.

He chose to interview Uber drivers in Toronto because at the time, Uber hadn’t yet come to Halifax and Toronto had a long history with Uber. Kris interviewed 19 Uber drivers from a diverse range of nationalities and backgrounds, allowing him the opportunity to learn about a wide range of experiences in the digital economy labour market and how those experiences impacted people and the economy.

When he returned to Halifax, he continued analyzing his collected data, but a few months later, in the winter of 2020, COVID happened, along with a lot of other social and political turmoil around the world. Kris went on hiatus from his thesis work for about 18 months.

Kris adds that Dr. Foster, his thesis supervisor, would check in on him occasionally, asking him about his progress and student status.

“I was excited when Kris decided to pursue a Master’s and very worried when he started to fall through the cracks during the COVID lockdowns,” Dr. Foster says. “He was struggling, and it wasn’t just his own unique problem — he was at the intersection of a bunch of structural challenges: he’d been working in restaurants and lost hours and wages due to the pandemic, his scholarship funding didn’t cover his living and tuition expenses, and there was nothing either of us could do to resolve any of that.”

But even though Kris wasn’t formally working on his thesis during his hiatus, he was still invested in the subject.

“When it comes to politics, technology and economics and the intersection of those things, I was still keeping up with the news about Uber and tech in the gig economy and listening to podcasts about tech and politics, my interests were still very much in it,” says Kris. “If I had not taken that time off, my thesis would not have been what it became. It would have been something very different. I benefitted a great deal from the hiatus because I was also quite passionate about what I was doing.” 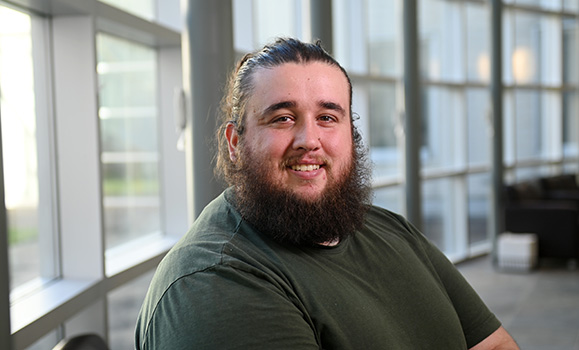 Eventually, in the fall of 2021, Kris returned to his graduate work, adding that Dr. Foster and the department were very welcoming and encouraged him to return to complete his research, of which he was very thankful for after such a long break.  They also helped supplement his income by offering him some research assistant work to help get him across the finish line, including a unique job on a project led by Dr. Foster and Liz Fitting, a professor in the Department of Sociology and Social Anthropology, on local food movements and food sustainability in Nova Scotia.

When Kris heard about this opportunity, he jumped at the chance.

“For those who don’t know, this is the golden opportunity for someone who is not a professional researcher,” Kris says. “To be paid to do the research, the fun part, that was an opportunity that I did not want to miss.”

The job would require him to work for six weeks, embedded on a farm in the Annapolis Valley, living and working among local folks as well as temporary foreign workers, learning about the state of local food and food production industry. He also felt like he had a leg up for this kind of research considering the unsupervised, self-directed field work he did for his data collection in Toronto for his own thesis research.

“That was something that I really wanted to do,” says Kris. “So, I said to Karen, ‘I’ll make you a bargain, if I can finish my thesis before this field works starts, can I do it?’ Karen said yes.”

Even though he came close, he didn’t completely finish his thesis before going to the field location, but by that time his work was well underway. He brought his laptop with him to the farm and when he wasn’t working on the field (which included sketching, modelling, taking pictures, conducting interviews, and getting his hands dirty at least once a day), he worked on and finally submitted his thesis.

Dr. Foster says Kris’s MA thesis is one of the most interesting she’s ever read, noting that he could continue to work with his data and produce more out of it if his circumstances allowed. She is very proud of Kris’s dedication to finishing his degree.

“It took guts and determination,” she says. “So, seeing him walk across the stage at Convocation is extra important to me.”

Kris hopes to some day go for his PhD, but his plans for the next several months are to continue working to pay down his student loans and to look into some professional development opportunities in the workforce.

Kris says that it was his passion for his research topic that carried him through this whole experience and he advises future graduate students to keep that in mind.

“The passion’s what’s going to help you get back on the horse when you fall off. So, choose your topic carefully.”