Paul Bentzen, a Dalhousie biology professor and geneticist at the centre of the effort to save the Atlantic whitefish, is shown with John Batt, right, manager of the Dal's Aquatron. (Danny Abriel photos)

At the base of a winding staircase and tucked away in a dimly lit room, about a hundred healthy fish represent the last, best hope for an ancient species on the brink of extinction.

Set against a concrete wall lined with black water pipes and the occasional lightbulb are a half-dozen large fibreglass tanks that contain the only remaining captive Atlantic whitefish on earth.

Their existence in the basement of Dalhousie's Steele Ocean Science Building is the result of the discreet, but critical work of a small group of researchers and biologists committed to saving an ancient aquatic species that is so endangered its only known habitat is three lakes within a single watershed in Nova Scotia.

"We're trying to rescue a species here," says Paul Bentzen, a Dalhousie biology professor and geneticist at the centre of the effort to save the Atlantic whitefish.

"I've worked on a lot of different species throughout my career, but nothing as existential as this project. It's like encountering some tragedy that's unfolding in front of you and you see it and can't ignore it."

Pushing back the ‘extinction clock’ 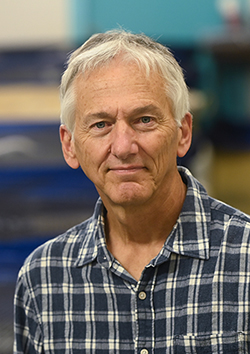 Far from ignoring it, Dr. Bentzen (shown left) and colleagues at Dalhousie, the Department of Fisheries and Oceans Canada (DFO) and the conservation group, Coastal Action, have spent the last four years rearing hundreds of the sleek, silvery fish in Dal's Aquatron to serve as broodstock, in the hopes that they could eventually be captively spawned, and their progeny could be released  back into the wild.

That work is beginning to pay off. The team has released more than 150 juvenile Atlantic whitefish into the Petite Riviere watershed over the last couple of weeks, returning them to one of the three lakes near Bridgewater, N.S., that was once home to relatively healthy populations of the species.

It is very early days, but so far the results look promising and the fish appear to be doing well in their new home. Jeremy Broome, an aquatic science biologist with DFO, is leading that part of the project for the federal department and he and his team have overseen several such releases recently. Each release is a multi-step process that requires patience and precision when it comes to trying to ease the fish into a more natural setting.

"We think we're pushing back the extinction clock with what we're doing," he said.

"It's a big experiment and we have to see how this develops over time, but these have been big gains and what we've been working toward over four or five years. We've finally reached this point where we have progeny to work with."

"We're laying the foundation to turn the corner on this."

A ‘death trap’ for whitefish

The journey to this moment began in 2018 when Dr. Bentzen was attending a government announcement at the Steele Ocean Science Building and received an email from a local CBC journalist. The reporter had heard that about two dozen juvenile Atlantic whitefish that were being raised in a federal Fisheries facility were going to be released back into the Petite Riviere Lakes, where they had originated.

The lake in the Bridgewater watershed is also overrun with chain pickerel, one of the two main predators that can gobble up whitefish whole and have been one of the many reasons for their dangerously low numbers. Not native to Nova Scotia, the pickerel were likely introduced illegally into waterway near Digby in the 1940s and spread from there, becoming so proficient at eating their prey that Dr. Bentzen refers to them as freshwater barracudas.

"It's just a death trap for the whitefish," Dr. Bentzen said of the lake. "So, I called DFO and said, 'What if Dal took them?' I hadn't talked to anyone at this point! But sure enough, the official reply came back and it was yes. So, it became a partnership between Dal and DFO."

On Dec. 23, 2018, the Aquatron took delivery of 25 juvenile Atlantic whitefish that at the time were about 15 centimetres long and facing an uncertain future. Today, swimming counter clockwise in one of the large tanks in the basement, some measure 52 centimetres and weigh roughly 1 kilogram. 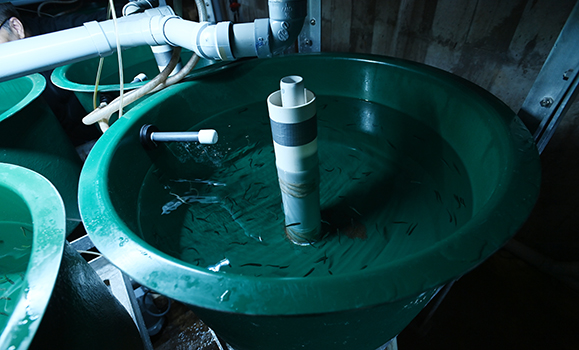 "It was nervous work at the time," says Aquatron Manager John Batt, who has led a team of dedicated technicians tending to these fish since their arrival.

"You feel a lot of pressure. There are probably less than 300 adult whitefish in the wild and if left alone, these fish are extinct."

How to rejuvenate a species

Heading off that prospect has involved much work at Dal, including developing appropriate food sources, ensuring their tanks are sterile and free of stressors, and carefully handling the fish eggs spawned on site.

Staff collect the eggs from fish in the basement tanks and place them in dozens of aquaria lining the walls of a wet lab one floor above. Each tank holds up to 1,000 eggs, which look like translucent, clear balls with black beady eyes. They stay there for several weeks before hatching and then are moved to the basement to grow, feasting on a diet of commercial fish feed as well as live foods that approximate their natural diet.

Last January, the broodstock produced 21,000 eggs, with about 10,000 of those remaining viable — a success when it comes to rearing. It is hoped that they will release 1,000 to 1,500 of those young fish into the watershed this year.

Broome says the fish have to be acclimated to the environment in Milipsigate Lake. They do that by incrementally adding lake water to streamside tanks filled with water from the Aquatron. Once fish have been acclimated successfully to the local source water, they are then moved to a soft-release net enclosure in the lake, where they are held for additional acclimation and monitoring prior to being released to swim freely.

"The fish are surviving the acclimations. We are feeding them three times a day and they have grown quite noticeably," he says.

"I'm trying to stay cautious, but I’m really optimistic and excited about how things are going so far." 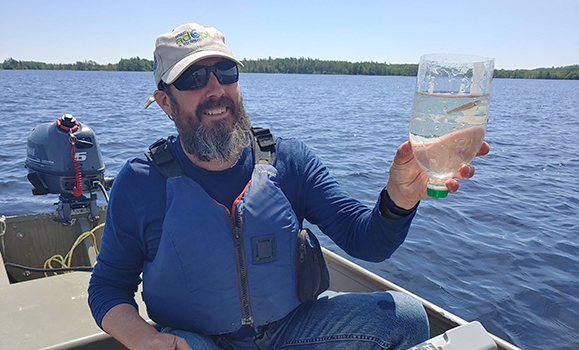 Andrew Breen, a technician with the Department of Fisheries and Oceans, prepares to release Atlantic whitefish into a Nova Scotia lake. (DFO image)

Dr. Bentzen shares that optimism for a species that has managed to hang on despite being classified as endangered for decades. The only other known population of whitefish — in the Tusket River Watershed near Yarmouth — was likely wiped out decades ago by a combination of dams, acidification and habitat degradation.

The Atlantic whitefish was only given its current scientific classification and distinguished from the 70 odd species of whitefish in 1987. It is thought that it branched off from its closest living relatives a very long time ago, as much as 14 million years ago according to one scientific estimate.

“It makes me incredibly proud to have such a palpable example of Dalhousie research at work making the world a better place,” says Alice Aiken, Dalhousie’ vice president research and innovation. “Our research is intertwined with positive impact across so many areas, and this is a brilliant example of how our scholars and infrastructure are making a real difference to the natural world.”

Those working to save the species hope they can expand their range and populate other Nova Scotia waterways with the fish, raising the chances of their long-term survival. They plan to place a mobile trailer — designed by Batt and a Dal student — on the lake's shoreline where they can be reared and then released. The project was funded by the Nova Scotia Salmon Association through the Canada Nature Fund for Aquatic Species at Risk.

DFO and partner Coastal Action have also conducted yearly boat electrofishing since 2018 in each of three of the Petite Lakes to reduce the populations of the invasive predators, chain pickerel and smallmouth bass.

Related reading: Fish feed hundreds of millions of people. This researcher hopes to create a better blueprint for conservation

A buoy for biodiversity

It is just one more initiative to help a little-known species the team believes should occupy a more prominent place in the Canadian cultural landscape, much like the piping plover or Atlantic salmon.

"The Atlantic whitefish deserves a secure, stable program to save them," says Dr. Bentzen.

"This is an ancient species and is not closely related to any other living species, so from a scientific and cultural legacy perspective this is really, really important. They should be treated as a national treasure."

The ability to conserve it also has broader implications, says Batt.

"Biodiversity is humankind's report card and the more biodiverse it is, the better. Every time one of these species disappears, it's a tick against the job we're doing." 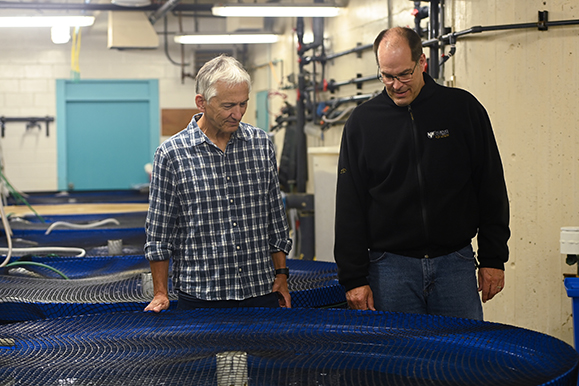