They are one of the most heavily produced fruit crops in the world, with their cultivation dating back at least 7,000 years in Central Asia before moving west along the Silk Road, into Europe and beyond.

But, the apples found in the forests of Kazakhstan many millennia ago would stand in sharp contrast to the large, sweet, predominantly red fruit that fill grocery store shelves around the globe today, according to new research coming out of Dalhousie's Faculty of Agriculture.

Researchers tracking the evolution of apples over the years have discovered that modern-day varieties are 3.6 times heavier, about half as acidic and far less bitter than the wild ancestral species much like crab apples from which modern apples are derived. 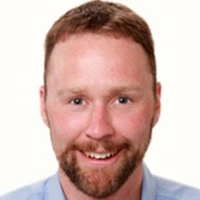 Using historical records, they also determined that apple breeding over the past 200 years has allowed the fruit to remain firm and soften less during storage.

Sean Myles (seen left), an associate professor in Agriculture, and his team examined 10 apple phenotypes — or traits — to assess how apples have changed due to domestication and breeding.

"We knew that apples had changed over time, but never before have we had the chance to quantify the degree of change so accurately," says Dr. Myles, who outlined the findings in a new paper in PLOS ONE.

"Indeed, the fact that apples are now over three times larger than their wild ancestors suggests that we've come a long way from the early days of harvesting tiny little fruit from wild forests. We should be thankful to all of the people over thousands of years who sowed the seeds of the most promising trees: that's why we now enjoy big, sweet apples that keep well for weeks in the fridge!"

The team drew from Canada's Apple Biodiversity Collection (ABC), an orchard in the Annapolis Valley that contains more than 1,000 different apple varieties, like Gala and Honeycrisp, but also ancient heirloom varieties and wild apples from the forests of Kazakhstan. They are divided between cultivated apples, or Malus domestica, and their primary wild progenitor species, Malus sieversii.

Because the wild ancestors of modern-day apples are grown alongside modern apples under identical conditions in the ABC, scientists have an unprecedented chance to see evolution in action.

"You could imagine our ancestors when they were moving from place to place, they would have taken their favorite apple seeds with them and when you do that for generations and generations, you get slow improvements and a deviation away the ancestral state," said Tommy Davies, a PhD student in the Agriculture Faculty and lead author of the study.

The team measured firmness, weight, acidity, harvest time and flowering time and then looked at how these traits differ between the wild apples of the past and present-day apple varieties.

They found that apple improvement over the past several thousand years has largely involved making apples tastier. Compared to the past, we now enjoy apples that are less acidic and bitter, and that are sweeter and store better, says Dr. Myles.

While apples may be sweeter today, they appear to contain significantly less antioxidants than their ancestral kin. It's that kind of data that might allow breeders to guide future improvements when it comes to cultivation strategies. It may also mitigate some of the high costs of growing apple trees, which often bear fruit five years into the lifecycle requiring growers to invest heavily before generating revenue.

"We may want to tap back into these ancestral apple varieties when breeding new varieties so that our future apples provide more protective effects against common diseases," said Dr. Myles.

"This is one of the key purposes of establishing and maintaining Canada's Apple Biodiversity Collection: to not only maintain the apple's tremendous natural diversity, but to tap into that diversity for future apple improvement."