From sociology to Mary, Queen of Scots: One Dal alum's adventures in writing

Jennifer Morag Henderson's latest book, Daughters of the North: Jean Gordon and Mary, Queen of Scots, will be released in North America this spring. (Provided images)

Growing up in Scotland, Jennifer Henderson (MA’02) always knew she wanted to be a writer. After completing a joint-honours degree in English Language and Sociology at the University of Glasgow, she felt she gained the language tools she needed to support her writing career but wanted to further her studies in sociology, “learning about people and society and ideas about how things worked.”

With an urge to travel and an interest in the connections between Scotland and Canada, Henderson came to Nova Scotia to pursue her MA in Sociology at Dalhousie.

Henderson, mainly known for writing history and biographies, is also a published playwright, poet, novelist and journalist who doesn’t necessarily see these as separate genres. “It’s all writing! Telling stories and using words,” she says, adding that telling stories through people’s lives is influenced by her studies in sociology.

Dal experiences help her talk about her books

This Friday, Henderson is the featured guest speaker for the Department of English’s Speaker Series, where she will talk about how her background helped shape her writing career. She will also talk about her new book being released in North America this spring, the historical biography Daughters of the North: Jean Gordon and Mary, Queen of Scots. It reframes a turbulent period in history by focusing on Jean Gordon (the first wife of the Earl of Bothwell, husband of Mary, Queen of Scots) who became Countess of Sutherland: the most powerful woman in the north.

Her first book, a biography titled Josephine Tey: A Life was selected as a ‘book of the year’ by several national newspapers and was positively reviewed in various publications in the UK and U.S. publications. That acclaim earned her invitations to speak at various book festivals and venues, including the British Library in London.

While studying at Dal, Henderson also worked at the CKDU campus radio station, hosting a weekly breakfast show called Spilt Milk, playing a mix of Scottish and Canadian music. She credits her public speaking and broadcast experience at CKDU with equipping her to be prepared for interviews and speaking engagements. “It made a huge difference when I started being invited to speak at book festivals and events that, because of CKDU, I already knew how to use a microphone properly, and was aware of how speaking to an audience can feel.” 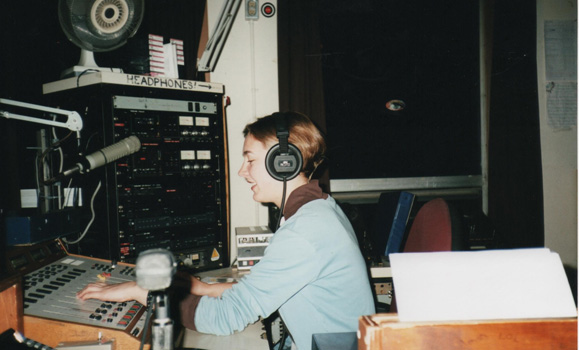 Henderson in the booth at CKDU.

Sharing stories and insights as a way of giving back

Twenty years later, Henderson cherishes the memories and friendships she gained at Dalhousie and in Canada, keeping in touch with her CKDU and grad studies friends. She is looking forward to reconnecting virtually until her next opportunity to visit Nova Scotia. And she is also happy to be a volunteer with Dal’s Insight Circle, through which she answers monthly questionnaires, offering opinions and influencing important decisions at the university. She sees it as her opportunity to give back to Dal by contributing her time and sharing details of her education and career experience.

She says she’s continued staying in the know on what’s happening at Dal through reading Dal Magazine and following Canadian news, music, and writing.  And she’ll go on drawing upon her sociology studies to craft her stories.

“I like to write about the interaction between people’s personal choices and the world that they live in, and I like stories that show how interconnected things are. Often true stories are more unbelievable than any fiction!”

Members of the Dalhousie community are invited to attend the English Department’s Speaker Series event featuring writer Jennifer Morag Henderson, alum of the department of Sociology and Social Anthropology in the Faculty of Arts and Social Sciences and the Faculty of Graduate Studies, happening live online this Friday, Feb. 18, 2022 at 3:45 p.m. – 5 p.m. AST. To gain access to this webinar, please register in advance.

For more information on Jennifer Morag Henderson, her publications and career, visit: https://jennifermoraghenderson.com/