Growing up in Halifax’s North End, Jalana Lewis (JD’13) was aware of Dalhousie University. But she was not sure if the university was aware of her, or her community, as an African Nova Scotian.

There are several recommendations in the strategy that Lewis believes are notable. One proposes the creation of international exchange programs with historically Black colleges and universities so African Nova Scotian students can experience campus life where they are the majority. Others call for Dalhousie to promote career opportunities and deliver educational programming in African Nova Scotian communities. “Some of our goals are lofty, some are short term, and some are long term, but given Dalhousie’s size and commitment to this work, I’m confident that all of them are doable, even if some take longer than others,” Lewis says.

“The ANS Strategy is truly transformative and is embedded in Dalhousie’s Strategic Plan, Third Century Promise,” says Michelle Williams (BSW’91), an assistant professor at the Schulich School of Law and co-chair of the strategy’s working group and advisory council. Williams is also one of Dalhousie’s inaugural provost fellows and her research is focused on African Nova Scotians as a people. “The key to the strategy is recognition that African Nova Scotians are a distinct people and that nothing should be done about us without us.” 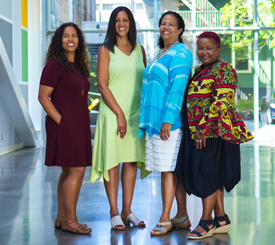 For Williams and Lewis, their working relationship is coming full circle. Williams was director of the Indigenous Blacks and Mi’kmaq Initiative at Schulich School of Law when Lewis was a student in the program. “It was my privilege to work with Jalana, who was an incredibly capable, engaged and inspiring student with deep connections to African Nova Scotians,” Williams says. “It is equally delightful to work with her as a colleague who has become a leader in her own right at Dalhousie, building bridges between the university and the African Nova Scotian people and facilitating the strategy’s work.”

Progress has already been made on several fronts. For example, Dalhousie senior leaders have undergone immersive training to help them understand the challenges facing African Nova Scotian students, staff and faculty on campus. Partnerships are forming with faculties such as Open Learning and Career Development to engage and deliver courses to African Nova Scotian communities. University policies that impact African Nova Scotians are being reshaped. And a definition of ‘African Nova Scotian’ has been developed to guide decisions related to scholarships and targeted hiring initiatives.

“We have shared that definition with other institutions to help them in their efforts to identify and engage with the community,” Lewis says. “Even members of the advisory council have indicated that the process has been helpful for them because they have been able to use it in their workplaces.”

The goal now is to keep transforming recommendations into achievements. Williams says one concrete step forward will be the creation of a dynamic hub or commons at Dalhousie. “It will be a culturally immersive meeting and workspace and research lab. It will bring together African Nova Scotian students, staff, faculty and community with the broader Dalhousie community and thus become the first such community-academic hub for African Nova Scotians as a distinct people,” she says. 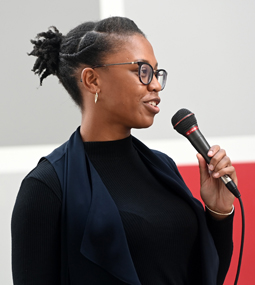 For Lewis (pictured here at an Oct. 2021 event to share the strategy with the Dal community), the success of the strategy involves building on specific targets to create a university community that is more reflective of African Nova Scotians. She wants to see more African Nova Scotian students, staff and faculty; more targeted scholarships; and more students progressing to professorships and leadership roles with the university. “When Dalhousie is a place that is sought after by community members because of their families’ experiences, or their own, or they see the university as a natural fit without necessarily knowing why, I will know we have been successful with this strategy,” she says.