John Batt, manager of Dalhousie’s Aquatron, is heading up Dal’s side of a group initiative to replenish Nova Scotia’s dwindling salmon population.

The project was initiated by Parks Canada in 2019, and on Oct. 6, the team released its first batch of 18 salmon smolts into the Clyburn Brook in Cape Breton’s Highlands National Park.

“Parks Canada collects small salmon parr, which are four to six inches long, more like five to seven inches long. They bring them to us [the Aquatron] and we grow them bigger to sexual maturation. Then they go back and put them in the river,” says Batt.

The Parks Canada Aquatron project differs from other hatchery enhancement projects, which mate fish in captivity and release babies into the wild.

“In this case, we’re releasing the grown-up fish so they can go and make more fish. It’s sort of a different strategy. It offers some advantages in that the fish make all the selection. Fish are talking to fish, deciding whose babies are whose.”

“One animal can have a massive contribution to the survival of their species.” 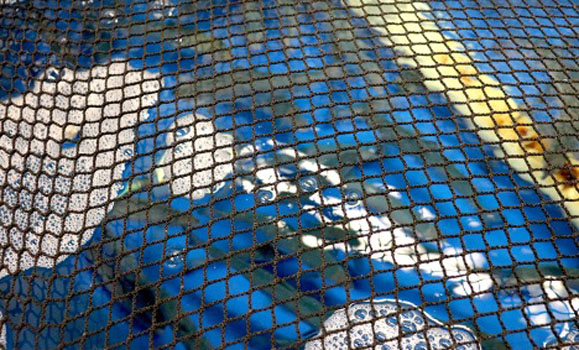 Freshwater salmon parr swim in an Aquatron facility tank. A net keeps the fish from jumping out of the tank.

Currently, the Dal Aquatron is the largest of its kind in any Canadian university. It was chosen by Parks Canada over other aquatic services based on size and specialty services.

“We have our own vets on campus. Chris Harvey-Clark is our university director of animal care and Dalhousie’s official vet. So, we have very quick response to any health issues,” Batt explains.

“In August of this year, we started looking at the 2019 cohort of parr and we had four fish with what we call, phenotypic in size. They had outward body expression that showed them to be gravid. They were starting to carry eggs and looked like they’d be ready to spawn this year.”

When the Aquatron team got a return date for the fish from Parks Canada a month later, they checked the fish again. This time the team used the ultrasound machine. They found 14 more fish ready to be released.

“Using tools like this, along with expertise we’ve been developing, we’re able to bring more fish back to the wild than originally thought.”

Releasing the salmon smolts on time is crucial to the success of the replenishment project. In using specialty tools like the ultrasound, Batt and his team ensure more healthy salmon reach the river.

From tank to riverbank

Changing a fish’s environment causes stress. The Dal Aquatron team works to minimize this stress as much as possible. The fish are taken from fresh water, raised in fresh water, and returned to fresh water before they’re old enough to make the journey to sea.

“When you bring these fish in, they’re wild wish. Getting used to the feed and adapting to captivity is difficult. Our staff are trained aquatic animal care technicians. They understand what’s going on.” 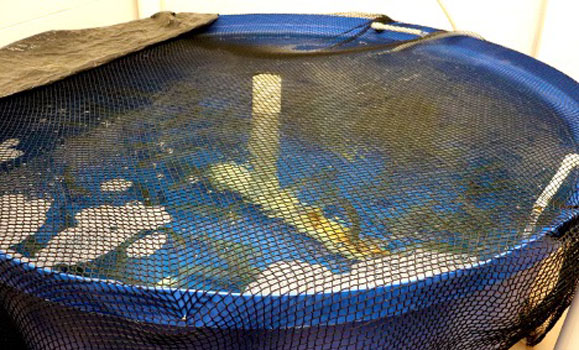 Research tank at Dalhousie Aquatron facility houses salmon parr. The fish will be weighed and separated before reaching maturity for release.

Batt explains early troubles with the project as fish and researchers struck a balance. Rather than sticking with the aquaculture feed normally used to raise salmon, Batt’s team created a new mix with a shrimp base.

“It’s more closely related to what their wild diet would be. So, to the salmon it smells more like food than an aquaculture diet. The aquaculture food is really healthy for fish. It’s dialed into what they need, but at the same time we want them to eat it. So, we sometimes combine the two.”

The new feed was a hit, and between changing nutrition and performing regular health checks, the second batch of salmon found balance earlier than the first.

“Where normally it takes a week or two to get wild fish to start feeding, the group that’s targeted to return next year were eating within 24-hours of arrival.”

Sending the fish back to the river as smolts requires equal adaptation.

“We try to get our conditions as close to the river as we can to make the physiological transfer easier. We can adjust the oxygen and temperature and a few other things.”

While the hopes for the project remain high, results of the released fish might take years to discover.

“Parks Canada has been swimming the river doing observations, but we don’t have a whole lot to report yet. It’s really hard to monitor fish you release into the wild. They go where they want to go. That’s the unknown of it.”

The team has taken DNA samples from the fish they release, for later observation and comparison.

“If in five years, the returns of fish coming back to the river are high, they can sample those fish and compare the DNA. This way, we can find out if any of the fish that came through Dalhousie contributed to the fish swimming in through the ocean.”