Sciographies is a radio show and podcast about the people who make science happen, presented by The Faculty of Science and campus-community radio station CKDU 88.1 FM. This is the third article in a weekly series that features excerpts from each new episode released this fall.

Boris Worm grew up with a love of nature and the great outdoors, so it’s no surprise that he ended up studying to become a marine ecologist.

Today, he’s a professor in the Department of Biology with a focus on biodiversity and conservation research. Dr. Worm is also the Ocean Literacy Ambassador with the Ocean Frontier Institute and the Founder and Scientific Director of Ocean School.

Local Sciographies listeners may recognize him from his biweekly CBC Mainstreet segment as “CBC’s Oceans Guy.” Listeners further afield might remember him from one of his many appearances as a subject matter expert in popular film documentaries like Sharkwater and Racing Extinction.

In this week’s episode of Sciographies on Friday, October 1, host David Barclay interviews Dr. Worm. They cover his beginnings in Germany, his path to conservation biology and solution-focused research in the era of climate change, and science communication.

Listen to a preview of Dr. Worm’s episode

Here are some excerpts from the episode (edited for clarity and length).

On developing a big-picture outlook…

Barclay:  Was it intimidating growing up with parents that are interested in looking into the mind?

Worm: I will say that I do recognize other people who had psychologists as parents because it's a certain type. We all grew up a little paranoid that somebody is constantly kind of x-raying our soul [laughs]. But it's also a certain outlook someone has on the world, a certain understanding of why people are the way they are. Maybe there’s even an interest in layered experiences where, you know, there's the conscious and the subconscious; we know why we do some things, and there are other things we don’t even know why we do them. I think that [outlook] has driven my quest to understand why we are wrecking the planet, to some extent, without even wanting to do it. And what are the drivers? Psychologically, but then also socially, economically and even personal drivers. Why do we make the decisions we do? It's something that interests me.

On the life-long love of water that shaped his career...

Worm: When people ask me what I do, I say that I'm trying to solve a giant jigsaw puzzle: the global ocean with people in it. Every study I do, every paper I read, every trip I take, every person I talk to is a piece of that puzzle and I'm trying to understand how it all fits together; how the ocean functions by itself, but also with us [as a factor] in it. What's our relationship to those processes, and how does that feed back on our well-being? That's really at the core of what I'm interested in. 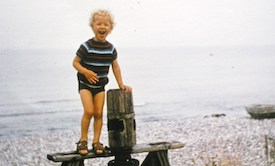 Barclay: I’m interested in how you arrived at that mission.

Worm: Funny anecdote about that. The first word I learned to speak wasn’t ‘mommy’ or ‘daddy’, or even ‘yes’ or ‘no.’ It was ‘water.’ I demanded to be put in the bath as often as possible. I think I had an early affinity to water. I just jumped into the ocean this morning and it’s the same feeling I had 50 years ago when I wanted to be put in the bath. It’s just my happy place.

On shifting to solutions-focused research…

Barclay: When I think about ecology and the ocean, it’s a little bit depressing. Seems like it’s a bit of doom and gloom. What’s your perspective on the outlook?

Worm: Through the 2000s, we did document a lot of the doom and gloom. The 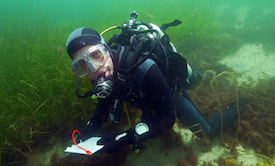 depletion of species, the extinction risk some species are facing, issues of pollution and climate change, habitat destruction and loss, and so on… I will say that circa 2008-09, I was quite pessimistic because I didn't see a lot of solutions being implemented… That changed after 2010… A lot of us started working on how to get back what was lost. Issues of recovery, protected areas, rebuilding fisheries, fixing pollution, addressing climate change — those become became really important [research] topics in the 2010s. I was very curious about how to do this and I also felt a real need to work on something more positive, more constructive… The last five years have been quite positive, from my perspective, but there’s still tons of work to be done. We recently published a paper saying let’s not be over-optimistic yet — half of fisheries are trending in the wrong direction, but half are trending in the right direction. So, let’s build on that. We know what to do, we know how to fix it. People are doing it, so we just need to scale it.

Listen to the entire 30-minute episode of Sciographies at 2 PM Friday, Oct. 1, on CKDU 88.1 FM in Halifax. Or, stream on Apple Podcasts, Spotify, Google and other popular podcasting platforms. You can also listen to previous Sciographies episodes on the same platforms or at soundcloud.ca/sciographies and dal.ca/sciographies.