Ask an expert: Dr. Chris Richardson on pilot study that shows mixing vaccines can be highly effective in boosting immunity to COVID‑19

Canada’s National Advisory Committee on Immunization announced Tuesday that people who received the Oxford-AstraZeneca vaccine as their first shot can now get the Pfizer-BioNTech or Moderna for their second.

The decision affects millions of Canadians who were given AstraZeneca (AZ) as their first vaccine, but faced some uncertainty following the deaths of several people who developed a rare blood-clotting disorder linked to the vaccine. Provinces stopped giving AstraZeneca as first shots last month.

The concerns prompted multiple studies in Canada and around the world on the safety and efficacy of mixing and matching mRNA vaccines like Pfizer and viral vector vaccines, like AstraZeneca. 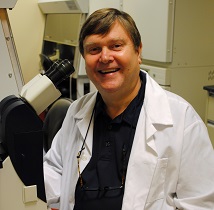 Dr. Chris Richardson, a professor in the Department of Microbiology and Immunology, has just completed a pilot study that shows mixing two different COVID-19 vaccines can be highly effective in generating the neutralizing antibodies necessary to fight the communicable disease and boost immunity.

Dr. Richardson, along with students and members of the Canadian Center of Vaccinology at Dalhousie, studied the antibodies produced in two 66-year-old subjects who received two different vaccines against SARS-CoV-2, the virus that causes COVID-19. They found both subjects had increased antibodies against the COVID-19 spike protein after immunizations, especially following the second booster.

How did you conduct your research?

We studied the antibodies produced in the two subjects who received Oxford–AstraZeneca, followed 33 days later with a second dose of the Pfizer-BioNTech vaccine. Serum samples were collected 25 days following the primary vaccination and 13 days after the secondary Pfizer vaccination. Also, these antibodies neutralized a model laboratory virus that is extremely safe to work with, which contains the COVID-19 spike protein as well as the green fluorescent protein from jelly fish. When cultured kidney cells are infected with the model virus, they glowed in the dark under UV light. Antibodies in the serum following the AstraZeneca and Pfizer vaccine inhibited infection of the cultured cells and decreased the amount of green light that they emitted. The effect of the neutralizing antibodies was especially pronounced after the second Pfizer booster vaccine.

How does this compare to someone who has recovered from COVID-19?

The levels of protective antibodies approached those of a convalescent patient who survived COVID-19 and is now healthy. These results firmly validate the value of the Pfizer vaccine in boosting immunity following an initial AstraZeneca inoculation.

Did the subjects experience any side effects?

Both immunized subjects experienced minimal side effects following the first immunization with AstraZeneca. However, both reported headache, chills, lethargy, fatigue and hardening at the site of infection following the second dose of Pfizer-BioNTech. One person’s symptoms persisted for 24 hours, while the other experienced symptoms for 36 hours.

Does this study tie into a larger one being done at the Canadian Center for Vaccinology that is investigating the mixing of vaccines?

It is a prelude to larger-scale studies being prepared by Dr. Joanne Langley, her colleagues and other laboratories around the world. Although we measured antibody responses in just a few subjects, it demonstrates a dramatic trend for protective antibody production in just 33 + 13 days following primary AstraZeneca vaccination followed by secondary Pfizer vaccination. This validates the decision made by Nova Scotia’s chief medical officer of health, Dr. Robert Strang, and others to decrease the time between first and second vaccinations to two months which could greatly accelerate the battle against COVID-19. It also shows that a mixed AZ and Pfizer vaccination protocol is very effective in generating anti-spike protein neutralizing antibodies. This is exciting and exactly what we hoped for.

The center is using some of the reagents and protocols we have generated, including the VSV-Spike model virus. Our function has been to develop reagents, methods, protocols and other vaccine candidates, with the object of passing them on to larger institutions such as CCfV.

How do you feel about the results?

It is exciting and informative since it gives a good overall indication that the secondary vaccination will greatly increase neutralizing antibody titers, that AZ-Pfizer heterologous vaccination is effective, that you can decrease the times between first and second vaccinations and that could accelerate our vaccine efforts.