It has long been known that ship strikes involving large vessels pose one of the greatest threats to North Atlantic right whales, whose coastal habitats and tendency to stay close to the water’s surface make them vulnerable to such deadly collisions.

New research by Dal scientists suggests that the endangered animals can also suffer fatal injuries if struck by small boats or by large vessels travelling at slow speeds.

“We’ve shown clearly that small vessels can be a threat to whales. We’ve shown that very light, but fast-moving vessels like trans-oceanic racing sailboats can cause potentially lethal injuries to whales, so it means if you’re in a vessel on the ocean, you may be a threat to these animals,” says Sean Brillant, an adjunct in the Department of Oceanography.

“We also showed that there is indeed no safe speed for large vessels when it comes to whales and we are not going to solve the whale death problem from ship strikes simply by reducing speeds.”

Dr. Brillant worked with Dan Kelley, a physical oceanographer at Dal, and former Dal student James Vlasic to construct biophysical models that predict the stresses whales experience during collisions. To do that they used information about right whale anatomy and simple Newtonian physics, along with damage measures gleaned from a database of 40 ship strike events for which pertinent data were available. One observation that prompted their study was that data showed that many whales killed by vessel strikes did not have broken bones. Instead, the 30 to 50-tonne animals suffered from massive internal hemorrhaging, a finding that suggested that collisions can be fatal even if they don’t break bones but sufficiently damage the circulatory system of the whale.

A core objective of the analysis was to determine the mechanical stresses on whales that were associated with a fatal injury, which would then allow predictions of new events under a variety of conditions. The study, published recently in Marine Mammal Science, focused particularly on North Atlantic right whales, but the model is also applicable to 10 species of large whales and all possible sizes.

Users can input a ship’s speed and mass, as well as the species of whale, its weight and length, and the thickness of its blubber, bone and skin. The model will then determine the probability that the resulting strike would be fatal for the whale. 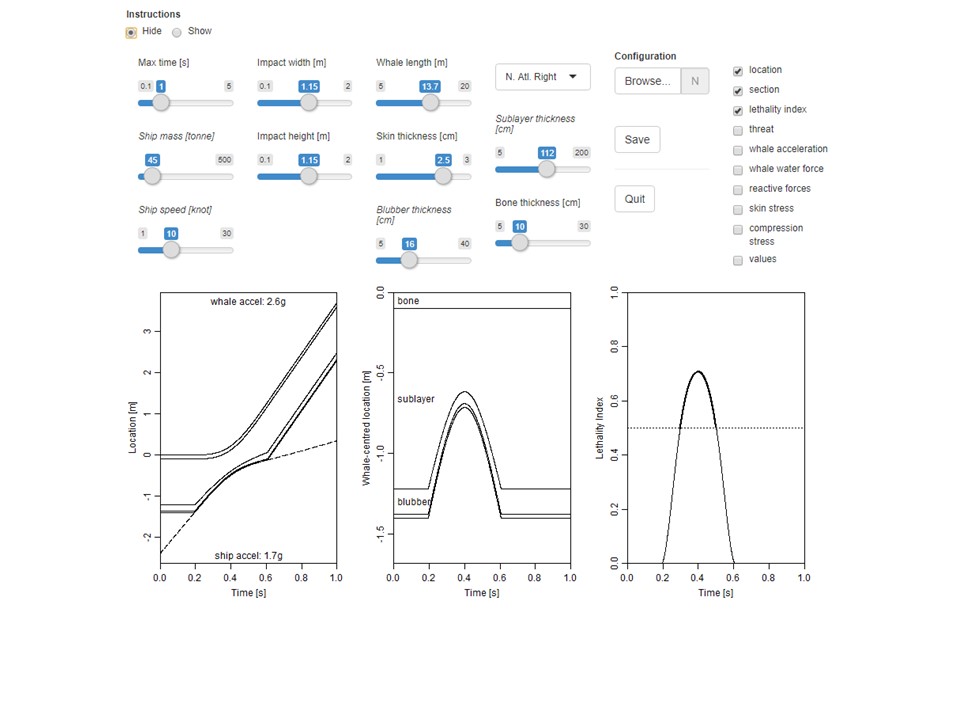 Above: A screen shot of the scientists' application.

The model shows that vessels of all sizes can cause stresses greater than the critical (lethal) level, and that large vessels produce stresses much larger than this even when travelling at reduced speeds, like 10 knots.

“The analysis for large vessels reveals that the speed limits commonly under discussion in the research and management communities (i.e. 10 knots) will provide only small reductions in the probability of lethal ship strikes,” the paper states.

“Thus, for large vessels, the only practical way of reducing the risk of lethal collisions is to reduce the co-occurrence of these whales with vessels.”

The researchers hope their model can be used to show fisheries managers and shipping companies how collisions with marine mammals harm the animals and how they can reduce the risk of lethality.

In a demonstration, Dr. Kelley inputs vessel speed and size, along with the whale species, weight, length, and the thickness of its tissues to determine whether the strike will likely be fatal for the whale. In this case, the vessel -- a 45-tonne fishing boat -- is travelling 10 knots when it strikes a 13.7-metre right whale, whose blubber is 16 centimetres thick. The model shows the extent of the impact on the whale’s skin and blubber and where it falls on the lethality index: about 70 per cent probability of lethality.

“Our idea for making this tool is that it can allow policy makers to actually see in practice how ship strikes work,” says Dr. Kelley. “We can make predictions about ship strikes without waiting for an accumulation of observed deaths. We don’t have time to wait for that since there are so few of these animals left.”

In the last five years, roughly 25 North Atlantic right whales have died in Canadian waters, reducing the global population to about 350. It is believed that all those fatalities were caused by ship strikes and entanglements in fishing gear. Last year, researchers struggled with a particularly difficult loss -- the death of a 40-year-old grandmother named Punctuation who had given birth to eight North Atlantic right whale calves before being hit by a vessel and then found floating off the Magdalen Islands.