The painting, entitled “Freedom Halifax 1814” by the late Richard Rudnicki, was delivered to the Marion McCain Arts and Social Sciences Building by representatives of the Army Museum Halifax Citadel. Rudnicki was the Army Museum’s Artist-in-Residence from 2012 until he passed away in 2019.

In 2012, he was commissioned by the Army Museum to research and create a painting illustrating the arrival of 2,000 Black Chesapeake refugees in 1814. His painting was one of the featured illustrations in the pathbreaking Report on Lord Dalhousie’s History on Slavery and Race prepared and published by the scholarly panel chaired by professor Afua Cooper of the departments of History and Sociology & Social Anthropology in the Faculty of Arts and Social Sciences (FASS).

Ken Hynes, head curator of the Army Museum, explained that after reading the Dal Magazine article about the report, he was inspired to do something beyond just giving permission to print an image — instead, he would deliver Rudnicki’s original painting to Dalhousie to display publicly for a long-term period. Hynes contacted Krista Kesselring, chair of the History department, to propose the idea.

“[Reading the magazine article about] Dr. Cooper and the great work she’s done was a great inspiration to us,” said Hynes, “which proves once again that universities can inspire others beyond the borders of the institution itself.”

An important piece of history

At the ceremony celebrating the transfer of the painting, held on January 21, FASS Dean Frank Harvey read a selection from the Rudinicki History blog which described the painting as, “King's Wharf, Halifax Harbour, 1814. A British frigate with officers, Royal Marine, Royal Navy and sailors. Disembarking are the Chesapeake Blacks they have rescued from slavery to undermine the American economy and for men to fight in the war.”

The painting depicts Black refugees disembarking the frigate from the Chesapeake Bay region. They were offered freedom from slavery in exchange for service to the British Army. In their new life, free from slavery, they suffered hardships and discrimination. In turn, this migration established Black communities in Nova Scotia and New Brunswick. 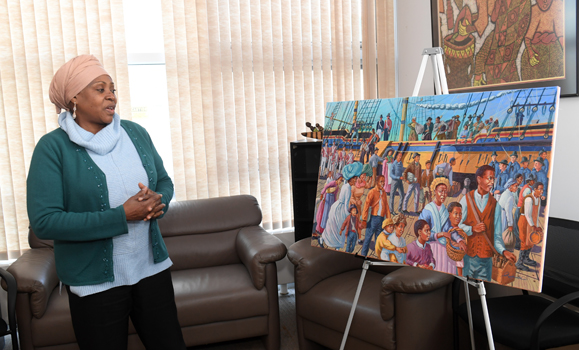 Dr. Cooper was familiar with the painting prior to its inclusion in the Lord Dalhousie report, witnessing its unveiling at the Army Museum a few years ago.

“I was so struck by the use of colour, the details, the individuality of each face,” she said. “The enthusiasm in the faces of the people, but also the anxiety and the expectation. I was so thrilled with it. I was in awe of it. And it always stayed in my mind.”

Dr. Cooper explained that as the Lord Dalhousie panel was working on the report, they wanted to include graphics and visual illustrations to augment and enhance the text. The first image that came to her mind was Rudnicki’s painting, so she contacted him to ask for permission to use an image of his painting in the report. Rudinicki (who was still alive at the time) and the Army Museum generously agreed.

“This [painting] is an important piece of Canadian history, certainly of Nova Scotia’s history,” said Dr. Cooper. “It tells a story in a way that maybe text cannot. These people are literally jumping off the canvas. And I want it to get a wide viewership. I want people to see it. It’s a beautiful tool to use for pedagogy.”

Soon to be on display in the McCain Learning Commons

Rudnicki’s wife, Susan Tooke, also spoke at the ceremony. She described her husband as someone who “cared passionately about human rights and the plight of those affected by social justice.”

“Richard, as was his nature, was dedicated to researching the necessary details of this subject, intent on creating an artwork that would show both the historical and the human aspects of this epic journey to freedom,” she explained. “Individuals and families are shown [in the painting] arriving with few belongings to start a new life within an unfamiliar country. This painting provides visual documentation of this major historical event, providing a visual legacy of one of the major black migrations to Nova Scotia.”

“Freedom Halifax 1814” will soon be displayed prominently on campus in the Wallace McCain Learning Commons.

“This important work will be viewed by the many students, faculty, staff and community members who pass through the Wallace McCain Learning Commons, which in addition to being a popular learning space, serves as the main entryway to the university from Lord Dalhousie Drive,” said Dean of Libraries Donna Bourne-Tyson. “The Dalhousie Libraries is pleased to serve as host to ‘Freedom Halifax 1814’. We know the painting will provide inspiration and help to inform everyone of this hopeful and challenging time in the history of Black African Nova Scotians.” 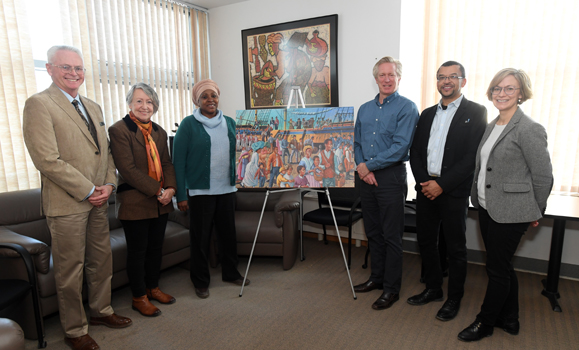