Femininity plus bravery — minus about 2,400 years

The Women of Troy, from the Fountain School, runs through Nov 30

In the ashes of war, are the living or the dead more deserving of our tears? The dead have bravely given their lives and are gone, but it is the living that carry the weight of the wounds sustained during what seems like the end of the world.

The Women of Troy, the newest production from Dal’s Fountain School of Performing Arts, takes place in the immediate aftermath of the Trojan War and is a strikingly accurate depiction of the heart-wrenching pain a woman can experience in her life. 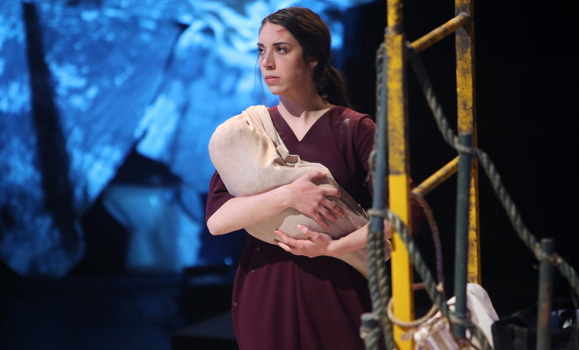 The changes made to the Sir James Dunn Theatre for this production help immerse the audience into the stage itself. When walking in, you are greeted by fewer seats than usually fill the room, and a giant canopy hanging from the ceiling. The stage is lined with camouflage, rubble and burning barrels, and prop machine guns are abundant. The choice to set the play in the modern day makes the story seem much more immediate.

While not mentioning or mimicking any particular conflict, the intricacy of the emotions portrayed make the set seem close to home and far too possible.

“It’s a text that’s really relevant,” says assistant director Robbie Dryer. “Euripides is the Greek playwright who focuses on voices in society that were usually unheard, like women, which is one of the things which make this play speak to a modern audience. Women suffer in war universally across different conflicts throughout time.”

Every face of femininity

One element of production that speaks to this universal suffering is the unison movement and speech of the chorus. The sense of sisterhood is the overwhelming feeling every time they speak. However, these women are also the source of some impeccably timed moments of comic relief. They move as different faces of once voice, always heading to the advice of their “mother.”

Hecuba, the mother figure of her kingdom, faces many challenges that resonate clearly today. She makes many references to the fact that she is old and how that changes her in the eyes of everyone. She is a strong matriarch who leads her female Greek chorus through the present ruin and uncertainty of their future. 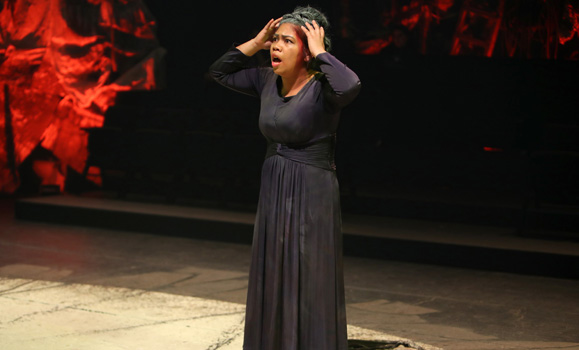 Actor Lyn Estuye found some of the keys to this complex character by thinking of the stories of others.

“I always think that in real war, the women and the children are the victims in the end. I think people don’t have an awareness of that. Hecuba has this struggle of which is worse, the people left behind, or the people that are actually dead? And she just keeps fighting with that.”

After all the dust settles, the next step is usually finding who’s to blame, and history has never had a better scapegoat than Helen of Troy. In this story, she is accused of starting the Trojan war because of her affair with Hecuba’s son Paris.

Presenting a very different depiction of femininity from Hecuba, actor Tori Devine plays the face that launched a thousand ships.

“I realized pretty quickly in my research process that there are different versions of Helen’s story,” she explains. “I made myself aware of all of the versions out there, and then didn't make a decision on what was the truth until after I had come to rehearsal and saw what the vision was going to be for the play”. This fits perfectly with Euripides, who toys with the question of Helen’s sincerity, leaving it up to the audience to decide on her guilt.

At every turn in this emotional story, the female characters are trapped — in one sense, physically, due to the clever use of the stage. The play being staged in the round, the women are literally surrounded; they are kept in one place by the audience, and by the male characters entering from every direction. “Trying to track who is where has been quite the learning curve,” says stage manager Logan McNutt. 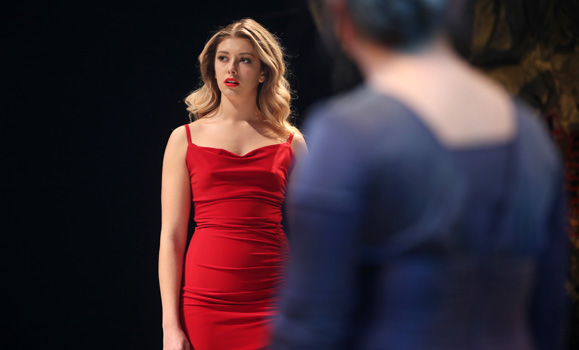 This staging fits well into the larger theme of female oppression. At every turn these women are beaten down, physically and mentally. There are moments in the production in which beautiful delicate singing is shared between the group, only to be interrupted by a man barging in, screaming at the top of his lungs.

The male characters in the show deal with the idea of fragile and toxic masculinity head on. However, Jeremy Dimitri notes subtle nuances of support for the women in his character of the herald Talthybius.

“A lot of my rehearsal process was analyzing the words I use throughout the play. We found some interesting choices in the verbs Talthybius uses. When he wants to be authoritative, he uses a lot of “taking”-related words. When he is being more sympathetic he uses verbs like “give” and “hope,” so there is a lot of duality within his character.”

But Talthybius’ sympathies are unique, as the other men burning the city to the ground, kill children, and take women as slaves. This all feeds into the main tragedy of the story, which is that when women are not in control of their own destinies, all of society suffers.

After a city has fallen

The ending of the play mimics life, in the sense that we are always uncertain of what will come next. How much of our destiny do we truly have in our hands? The intellectual question of fate versus choice is nothing new. The Women of Troy is a Greek tragedy for a modern age. Join hands with these women, and imagine how you might behave at what seems like the end of the world.