This upcoming Tuesday (November 5) marks the 40th anniversary of the day Dalplex opened to the general public.

The year was 1972 and Dalhousie University had formally committed to a new Physical Education, Recreation and Athletic Centre on campus.

But it wasn’t until the School of Physical Education’s 1976-77 Annual Report that the commitment began to become a reality: “A new facility, which will provide Dalhousie with 20 different activity areas, combined with a new program of ‘Sport For All’, promises an exciting future for the Division of Athletic and Recreation Services, the School of Physical Education, and the University.”

At the time, the student population at the university was approaching 9,000, not including the nearly 1,400 support staff and faculty also on campus. Most of the existing athletic facilities that been designed and built back in the 1930s, when there were only 700 students enrolled at Dal. The last major additions to the campus’ athletic facilities had been the construction of Memorial Arena in 1951, and the addition of a proper track around Studley Field (now Wickwire Field) in the 1960s.

With the addition of the School of Physical Education in 1966, as well as the need for sport and recreation space from the general community in Halifax, the university’s existing gymnasium (now Studley Gym) was practically bursting at the seams.

In order to build the much-needed athletic complex, the university embarked on a major fundraising campaign in October 1977, spearheaded by campaign chairman Stewart McInnes (BA 1958, LLB 1961), as well as Ted Wickwire (BComm. 1959, LLB 1962) and Ted Brown (Dip. Eng. 1962, BSc. 1963), all former Dal Tiger athletes. The campaign, dubbed DALPLEX, was incredibly successful and over just two years, raised all but 12% of its nearly $3.4M target (approximately $392,000) at the time the building was opened.

The footprint of the Physical Education, Recreation and Athletic Centre was to be 300 by 240 feet, providing 180,000 square feet of floor and swimming space, just over four acres. Comprised of three levels, the main floor, known as the fieldhouse, was to be an unbroken flat surface that could be divided by portable partitions.

The goal was to include five permanent basketball and volleyball courts along with four permanent tennis and 12 permanent badminton courts. Positioned above the main floor was a 900-foot track. The fieldhouse was to be covered with a suspended metal roof, the first of its kind in the world. 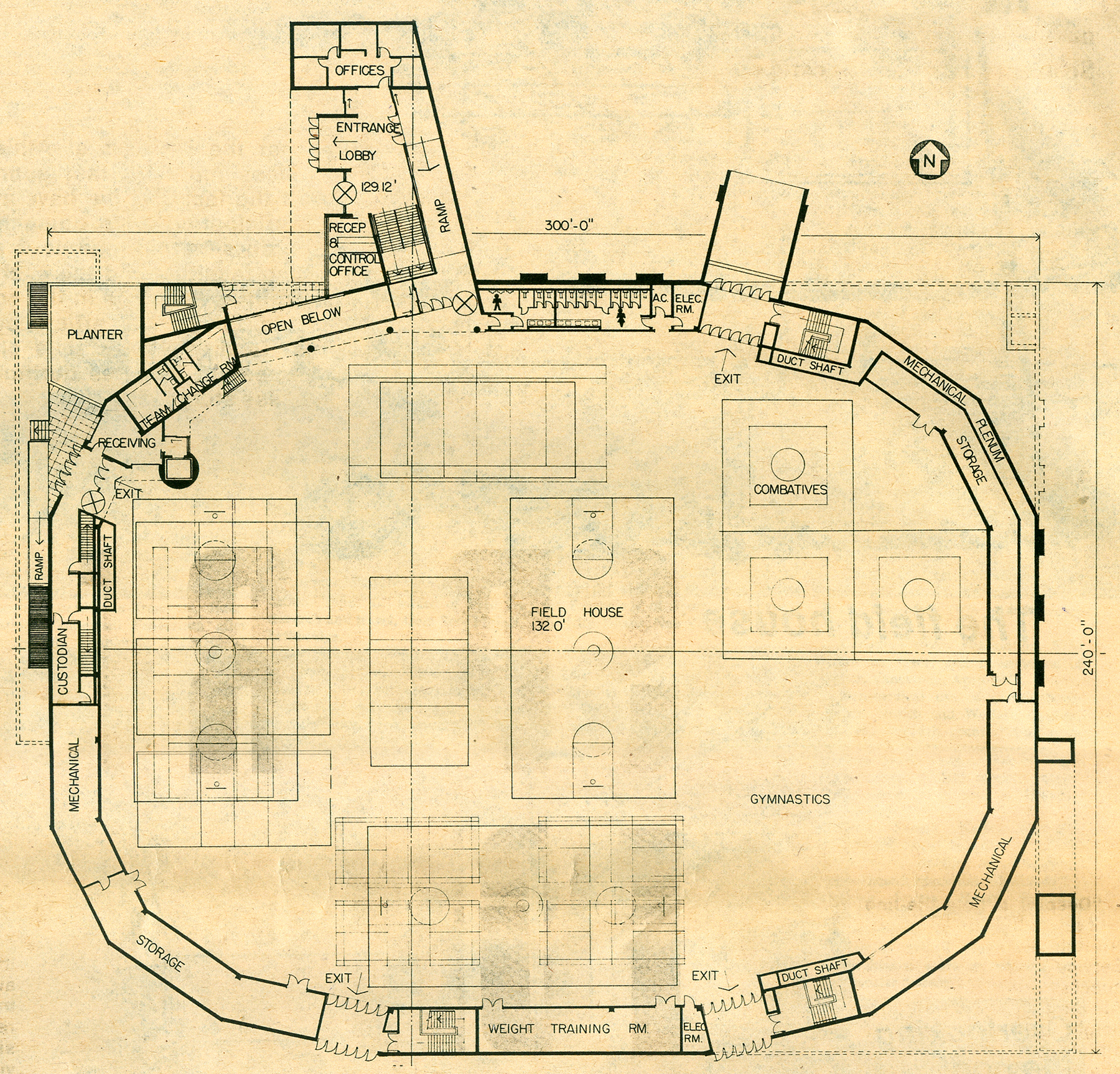 The level below the fieldhouse would have change rooms and a central equipment centre. About one third of the space on this floor was to be occupied by the School of Physical Education with offices, classrooms, labs, training rooms and a lounge.

The third and lowest level would be home to a 50-metre Olympic size swimming pool with bleachers plus handball, racquetball and squash courts.

In addition to meeting the needs of the School of Physical Education, Dalplex would also provide the university with facilities to encourage the development of recreational and sporting opportunities for the whole community and host competitions at the national and international level in 23 sports.

While the idea and initial planning of the Physical Education, Recreation and Athletic Centre began in 1972, construction didn’t begin in earnest until October 1976 when the first sod was turned. Nearly three years later, Dalplex opened its doors to students, faculty and staff of the School of Physical Education on Monday, October 22, 1979. Two weeks later it opened to the public on Monday, November 5 and began accepting members.

Dr. Greg Booth was the 65th community member to join Dalplex. The Dalhousie Dentistry graduate (Class of 1961) has spent the last 40 years making good use of the facility and recently reflected on his first impressions of Dalplex.

A life-long swimmer, Dr. Booth spent a lot of time in the pool initially, but soon ventured into other parts of the facility to use the track, strength training equipment and he also learned to play squash and racquetball.

When he retired from his dental practice 30 years ago, Dr. Booth started to spend time at Dalplex on a nearly daily basis. He even became a certified fitness and strength training instructor for older adults and was integral in helping to develop the Silver Tigers, an informal physical acivity program for seniors. Dalplex's resident Older Adult Badminton program still continues today, meeting in the fieldhouse every Tuesday and Thursday morning for exercise and social activity.

“I spend about two hours here (Dalplex) every day,” says Dr. Booth. “In addition to maintaining a healthy lifestyle and fighting Father Time, I feel a real sense of community here, Dalplex has been a real staple in my daily routine and I’m very grateful to have it as a part of my life.”

Changes over the years

A lot has happened within the facility in its first 40 years. Trends in physical activity have shaped much of Dalplex’s growth over the years, as have the demands of the students and its members. The student population is now just over 20,000 — 11,000 more than when Dalplex opened 40 years ago. That growth led to the addition of the new Dalplex fitness centre which celebrated its one year anniversary in May 2019.

Read also: A bright future for campus health and wellness: Inside the new Dalplex Fitness Centre

Dalhousie has always valued the role of athletics and recreation, long before the School of Physical Education began.

“Athletics and recreation play an important role in fostering health and wellness for our students, faculty, staff and community members,” says Teri Balser, interim president and vice-chancellor. “For the last 40 years, Dalplex has enriched the lives of Dalhousians and our neighbours. And with the recent fitness centre expansion and renovations to the fieldhouse, I am confident that Dalplex will continue to contribute to our community for years to come.”

Kathie Wheadon, Director of Facility and Business Services in the department of athletics and recreation, recently celebrated her 39th anniversary working at Dalhousie. During that time, she has had a number of different roles in the department and reflects warmly on the part she has played in the transformation of Dalhousie’s athletics facilities over the years.

“I have loved being involved in all the changes that have taken place here, whether I played a big part or a minor one,” says Wheadon. “The ongoing facility upgrades and additions to Dalplex, along with the new equipment and the variety of programs offered, has been a tremendous plus for everyone.

Most of all, it has been wonderful to witness the positive impact that Dalplex has had, and will continue to have on the lives of our students, employees and the community in general. I believe Dalplex is one of Dalhousie’s greatest treasures.”

A week of celebrations

Members and students are invited to take a stroll down memory lane thanks to the 40 Years of Dalplex photo mural that has been installated in the main corridor of the fitness centre.

Complimentary towel service is available all week and members and students can bring guests for free during Bring A Buddy weekend, not to mention the chance to win one of 40 prizes!

The Tigers basketball games (Wednesday, November 6 at 6/8pm) and volleyball games (Friday, November 8 at 6/7:30pm) will also feature retro music and contests to add to the celebrations.