Image captured on the research mission of a bluntnose sixgill shark. (Image from video.)

They are large, rarely seen and thought to inhabit deep waters far from shore.

But researchers exploring Vancouver’s coast in a small submersible were circled by several young bluntnose sixgill sharks, suggesting the species may like to prowl urban waters and could be more abundant than previously thought.

Chris Harvey-Clark, a marine biologist and veterinarian at Dalhousie University, was part of the mission and described the surprising encounters with three sixgill sharks in a paper published last month in Sea Technology.

Dr. Harvey-Clark says the team on board the Canadian-made Aquatica Stingray three-person sub didn’t expect to be approached by so many of the sharks about one kilometre off West Vancouver and at a depth of about 100 metres.

“To find them right off Vancouver and in those numbers is quite something,” he said about the research mission in September 2017.

“They are one of the largest sharks and are occasionally seen in the Strait of Georgia, but not often seen in Vancouver and then lo and behold we found lots of these young ones very easily.”

Dr. Harvey-Clark says it is rare to record multiple observations of juvenile sixgills, possibly in part because the cannibalistic nature of older, bigger adult sixgills forces the younger sharks to live at a different depth in their habitat.

The objective of the research was to assess the feasibility of using a submersible to find sixgill sharks in depths beyond the range of divers or fishermen, since the slow-growing, but long-lived species is typically found in waters up to 2,000 metres deep. 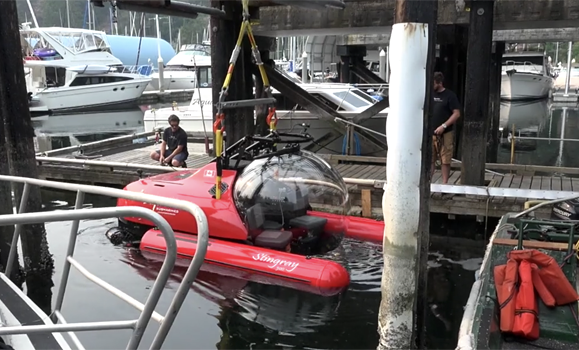 Dr. Harvey-Clark said the team plied the water with tilapia and mashed tuna blood, flesh and entrails to attract the sharks, which can grow to almost five metres in length. He and his colleagues deployed the submersible on two separate occasions, finding dogfish sharks, squid and Quillback rockfish but no sixgills on the first dive.

But a couple of days later, the first of three young sixgill sharks came into view through the clear window of the submersible before darting past. Researchers estimated its length to be about two metres, but could not determine its gender because of its quick movements.

A second, smaller sixgill shark was then seen foraging for food in the mud in front of the submersible. A third shark, thought to be about two metres, approached the brightly-lit craft and spent a prolonged period of time swimming underneath it, peering directly into the window and taking several passes in front of it.

Dr. Harvey-Clark said the sharks seemed less interested in the chum than in the electrical components of the submersible, with one male shark repeatedly rubbing back and forth against the sub and bumping into the front screen as he stared inside.

“He’s not interested in the fish at all – we’re the bait guys!” Dr. Harvey-Clark said in a video that captured the encounter. “He loves us – he loves our electrical equipment.

“They have shown a lot of interest in the electrical elements of the submarine and that is probably because they are a deep-sea shark and they have a good very good ampullary system for sensing electricity in the water.”

Filling in the gaps

The researchers say the discovery will help fill in some of the knowledge gaps about the sixgill shark, which is little known and of special concern by the Committee on the Status of Endangered Wildlife and Canada’s Species at Risk Act.

Only one inshore sixgill nursey has been identified in Puget Sound, Wash., the paper states, also noting that the population appeared to decline sharply in the early 1990s after a directed fishery was approved in British Columbia.

“Observations of larger animals on a regular basis at many locations effectively ended in 2005,” the paper says.

The researchers, however, found that using a submersible allowed them to search for sharks in areas that may be too deep for divers.

“Using the Stingray submersible…proved to be a highly effective strategy in pursuing an elusive subject,” the paper states. “The low amount of effort per observation indicates that sixgill juveniles were relatively abundant in the deeper waters close to Vancouver.”