A mother whale and calf at sea. (Guille Pozzi photo)

Populations of large fish and other marine species will decline steadily if little is done to stem the effects of climate change, according to a study led by Dalhousie University researchers that shows how greenhouse gas emissions could cause widespread global stock losses and habitat shifts.

The paper by a team of 35 international scientists and published Tuesday (June 11) in the Proceedings of the National Academy of Sciences presents a stark view of what will happen to the global biomass — the total weight of marine animals, such as fish, invertebrates and mammals — if measures aren’t taken to reduce emissions.

Derek Tittensor, an adjunct professor in the Department of Biology at Dalhousie who co-authored the report, says it provides a more comprehensive assessment of climate change because it is one of the first to use a combination of multiple climate and marine ecosystem models, rather than individual ones used in previous forecasts.

The innovative approach reveals that global marine animal biomass will decline under all emission scenarios, due largely to increasing water temperatures and a decrease in primary production. 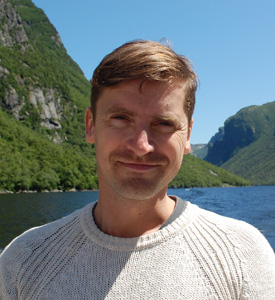 “We found that with every degree of warming you’re seeing about a 5-per-cent drop in the total amount of biological materials in the oceans, which is quite a significant decline and gets more serious as we move up the food chain,” says Dr. Tittensor (pictured), who is also a senior marine biodiversity scientist with the UN Environment World Conservation Monitoring Centre in Cambridge, UK.

“There are substantial consequences for marine ecosystems on a global scale. The oceans are changing quite significantly, but if we focus on what we have control over we still have a chance to alter our trajectory.”

The study projects that if rigorous measures are not put in place to curb greenhouse gas emissions, the biomass decline could soar to 17 per cent by the end of the 21st century.

The losses can be constrained significantly if strong mitigation measures are adopted, the report says.

“Reduction of greenhouse gas emissions will undoubtedly help to safeguard marine life as much as possible against further losses” says lead author Heike Lotze of Dalhousie.

The report, which was written by three Dalhousie researchers and 32 scientists from 12 countries, also found that the magnitude of the climate-change effect was similar in areas with and without fishing pressure.

The analysis suggests that climate-change impacts may be more severe at higher food-web levels, meaning that larger fish and marine mammals may suffer more severe declines than smaller species like phytoplankton.

Dr. Tittensor says that could cause a dangerous domino effect when it comes to species declines.

Researchers caution that biomass will decline in many temperate to tropical ocean regions, where people are highly dependent on the seafood supply and where marine biodiversity is already affected by human activity.

"We know that food production on land is increasingly put at risk by climate change impacts, such as extreme heat and drought. This study adds another disconcerting chapter to the global warming story, by confirming that human-made climate change endangers food resources in the oceans too,” says co-author Jacob Schewe of the Potsdam Institute for Climate Impact Research in Potsdam, Germany.

He adds that efforts to slow the marine losses are in keeping with the UN Sustainable Development Goal to achieve zero hunger by 2030.

“Our research shows that this will require not only a much more careful management of natural resources, but also rapid reductions in global greenhouse gas emissions," Dr. Schewe says.

Conversely, many polar regions around the Arctic and Antarctica could see biomass increases which may provide new opportunities for marine resource use but also challenges to management and conservation.

That could have broad implications for commercial fisheries if stocks migrate to other geographic areas as waters warm and polar ice melts.

“We can already see that fish species and other marine organisms are moving away from areas, and as they come under more stress it will be quite difficult for them to maintain their fisheries,” says Dr. Tittensor. “So, we have to recognize that there are going to be winners and losers when it comes to the impacts of climate change.”

For that reason, he says the insights gained from the report should inform decisions about fisheries and ecosystem management.

“Yes, things are changing but we have an opportunity to respond to them and deal with them in an effective way.”