Learning the dialects of sperm whales

Grad student Taylor Hersh’s innovative research is helping us learn more about the behaviour, movement and culture of sperm whales — and the unique dialects they use to develop a sense of community.

Taylor Hersh can trace her fascination with marine animals back to three things she encountered in sixth grade: a person, a book, and a photo.

The person was a classmate who wanted to be a marine biologist. Hersh grew up in landlocked Pennsylvania, and had never thought of marine biology as a possible career option. The conviction of her fellow student was really inspiring to Taylor.

The book was Stranded by Ben Mikaelsen. It tells the story of a 12-year-old who helps rescue, rehabilitate and release two stranded pilot whales. Although the book was fictional, Hersh was captivated by the idea of someone her age helping whales.

The photo was National Geographic photographer Brian Skerry’s full body shot of a Southern right whale. It was the first underwater picture of a whale she had ever seen, and was completely mesmerizing.

“Science had always been one of my favorite subjects,” says Hersh. “But those three encounters launched me down the path to marine mammal research.”

After a number of marine biology-related internships during and after her undergraduate degree in various places, including Maine, Washington, Mississippi, and Florida, Hersh was able to gain more experience and hone her interests.

“After helping with acoustic research on Southern right whales in Argentina, I realized that I loved listening to whales and trying to decode what they were saying,” says Hersh. “That led me to marine mammal acoustics.”

And when the time came for Hersh to start looking into graduate programs, Dalhousie quickly shot to the top of her list.

“I wanted to study marine mammal acoustics, but I also wanted to conduct research that related acoustics back to behaviour,” says Hersh. “When I learned that my now-supervisor, Dr. Hal Whitehead, studied marine mammal culture, including acoustic culture, at Dalhousie, his lab seemed like the perfect fit.”

For the past three years, Hersh has gone to Dominica each winter to work with the Dominica Sperm Whale Project (DSWP). The DSWP was started in 2005 by Dr. Shane Gero when he was also a master’s student in Dr. Whitehead’s lab. Now, 15 years into the project, the sperm whales that live off Dominica are one of the best studied marine mammal populations in the world.

Learning more about how whale dialects

Just like humans, different groups of sperm whales have different cultural dialects. These dialects are made up of Morse code-like patterns of clicks, called codas. Human dialects vary with both space and time, and studying these variations can tell us about the behaviour, movement, and culture of their speakers. The goal of Hersh’s research is to do the same for sperm whales.

Learning about how sperm whale dialects are similar to and different from human dialects can help us contextualize our own abilities. A better understanding of how many sperm whale cultural groups live in the Pacific Ocean and how their dialects change over time may also facilitate more effective management plans that utilize acoustic data.

“With human impact in the ocean increasing and sperm whale populations struggling to survive, effective management will be essential to conserving these animals,” says Hersh.

Listen: Three examples of a coda made by one of the two main sperm whale groups found off of Dominica

Developing a sense of family in a small space

Most of the fieldwork that Hersh has been a part of is carried out from Dr. Whitehead’s 40-foot liveaboard sailboat, Balaena. They tow an underwater microphone, called a hydrophone, on a cable behind the boat. This lets them listen to and record sperm whales.

“When we hear sperm whales on the hydrophone, we can home in on their location using special acoustic software, which also lets us follow whales overnight,” says Hersh. “We spot the whales by looking for their breaths, which rise a few feet off the water and can be seen from over a kilometer away in good conditions.”

The whales are recorded for the research Hersh is doing, and pictures are also taken of their tails when they dive to figure out which animals are spending time together. The team also puts temporary,
non-invasive sound and movement recording tags on individual whales, and flies drones to look at body condition and health.

The team spends anywhere from a few days to a few weeks out at sea, but come into port when they need to restock fuel, water, and food.

“Living and working on a small boat with three to six people for months at a time has its challenges,” says Hersh. “Personal space is extremely limited, and your best bet for getting some time alone is to scale the mast and sit in the crow’s nest.” 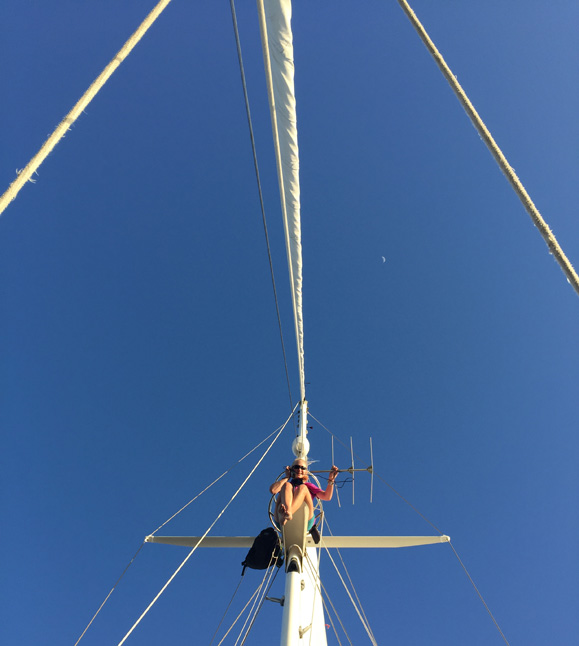 Taylor in the crow’s nest radio tracking a suction cup tag after it released from a whale.

Working from Balaena lets Hersh spend more time with whales and collecting data than could be done if she was land-based.

“It can be exhausting, but I love living on Balaena and have spent over 150 days on her so far,” says Hersh. “A real sense of family develops among the crew. And there’s something incredibly special about having a sperm whale be one of the last things you see before you fall asleep and one of the first things you see when you wake up.”

An opportunity to spend quality time in nature

Hersh plans to graduate with her PhD in 2021, but there have already been many highlights during her time at Dal.

“One of the biggest highlights of my PhD so far has been spending time with the whale families off Dominica,” says Hersh. “As someone who is holed up in an office with headphones on for most of the year, I cherish time spent in the field because it enriches my research and makes it more rewarding.

“It’s one thing to listen to an acoustic recording and hear sperm whales communicating,” continued Hersh. “It’s an entirely different experience to know that the recording you’re listening to is of a whale named Rounder communicating with her daughter Accra.” 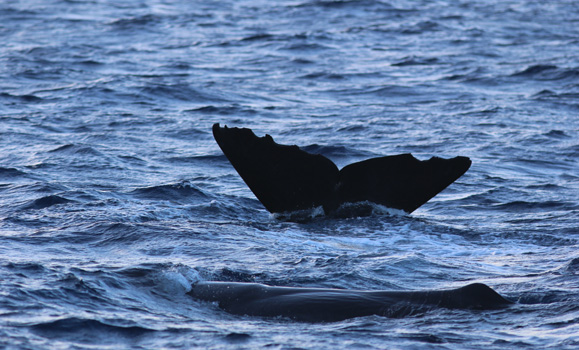 Rounder flukes in the background while her daughter, Accra, stays at the surface in the foreground. (Dominica Sperm Whale Project)

The lab that Hersh works in recently applied for funding to study sperm whales off the Galápagos Islands in 2020. If that funding comes through, she’ll be part of the research team that heads to Ecuador this winter.

“A huge portion of my thesis uses acoustic data that was recorded off the Galápagos Islands between 1985 and 2014,” says Hersh. “I would love to see the whales that I’ve been listening to for three years in person.”

Saturday, June 8 is World Oceans Day. The concept for this day was first proposed in 1992 by the Government of Canada at the Earth Summit in Rio de Janeiro. A United Nations General Assembly resolution was passed in December 2008, which led to June 8 officially being recognized as World Oceans Day. Each year, an increasing number of countries and organizations participate in this annual event.

For 2019, the theme, Together We Can, will focus on what we can all do together to create a healthy ocean and better future. Millions of people are expected to virtually join hands around the world to show their support for protecting our shared ocean. Visit the World Oceans Day website to learn more about this year’s theme and ways to get involved.