“I am delighted to be recognized in this manner by my peer community – the Canadian AI community is one of the oldest and renowned around the world for its multiple seminal contributions to the field of Artificial Intelligence,” says Dr. Matwin. “I see this award as a recognition of my approach to research and to training of the next generation of AI researchers and practitioners.”

CAIAC's mission is to foster excellence and leadership in research, development and education in Canada's Artificial Intelligence community by facilitating the exchange of knowledge through various media and venues. CAIAC is the official arm of the AAAI in Canada.

The CAIAC Lifetime Achievement Award is presented to individuals who have distinguished themselves through outstanding research excellence in Artificial Intelligence during the course of their academic career.

Dr. Matwin has made significant contributions to CAIAC holding positions including CAIAC President and AI Program Chair. He also received the CAIAC Distinguished Service Award in 2010. 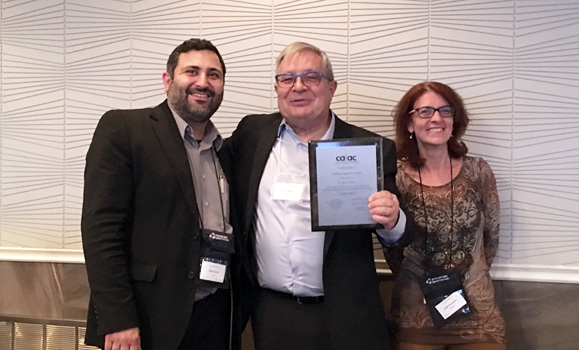 “His research contributions are significant with almost 10,000 citations of his papers, best paper Awards at CASCON 2017, and CASCON 10 year Most Influential Paper in 2011.  He is involved in numerous international research committees, advisory boards and panels in Big Data, Machine Learning and IA.”

The award was presented to Dr. Matwin at a banquet dinner at the 32nd Canadian Conference on Artificial Intelligence, Kingston, Ontario, on May 30.

The 2019 CAIAC Distinguished Service Award was also received by a Dalhousie researcher: Vlado Keselj, recognized for his outstanding service to the Canadian Artificial Intelligence community.

Dr. Matwin is a Canada Research Chair (Tier 1) in Visual Text Analytics and Director of the Institute for Big Data Analytics.

His research in Machine Learning – the area of “new AI” that brought about the recent breakthroughs in Artificial Intelligence – has contributed to him becoming renowned internationally.

In 2013, Dr. Matwin founded the Institute for Big Data Analytics at Dalhousie with the aim of creating a globally recognized centre of excellence in big data. Over the past five years, the Institute has supported more than 30 industry partners in using big data to make an impact and attracted and trained the next generation of researchers and practitioners in this area. There are currently over 40 graduate thesis students working out of the Institute.

“I am passionate about motivating and training students to be the next data scientists who can follow along with the vast advances happening in the field,” says Dr. Matwin. “There is a constant stream of new talent coming every year with new ideas, new approaches, and new cultures. Puling all of this together with this fantastic group of new talent from around the world is a privilege.”

Staying part of the discussion

In addition to his positions at Dalhousie and his Canada Research Chair, Dr. Matwin is a member of the Advisory Award of the Competence Centre for Machine Learning (ML2R) of Rhein-Ruhr (Germany), a member of the Board of the Data Science PhD program at the Scuola Normale Superiore (Italy), and a State Professor at the Institute of Computer Science of the Polish Academy of Sciences.

He also dedicates significant time to representing Dalhousie and the Province across Canada and the globe through his position on the CS-Can/Info-Can (Canada’s national computer science association) Executive.

“This work is important as we, the broader Computer Science community, must make sure that our voice is heard when decisions are made about allocating resources in Canadian science and technology, especially where research and higher education are concerned,” says Dr. Matwin.

“It is also important that the voice of mid-size research-intensive institutions, from smaller provinces, is part of the discussions of different aspects of policy and decision making that impact Computer Science at the national and provincial levels.”