Ethan Eastwood is graduating from J.L. Isley High School in Halifax this year — at age 16.

What’s Ethan’s secret? Participating in Nova Scotia Math Circles, a mathematics outreach program based out of the Department of Mathematics & Statistics at Dalhousie University. The program is designed to foster enthusiasm for math through interactive, creative and meaningful presentations.

“Math Circles has influenced my math education,” says Ethan, who’s been active int he program for eight years. “I came to understand that math is more than just arithmetic, it can be creative and fun. It made me think about the world in a different way,” says Eastwood. 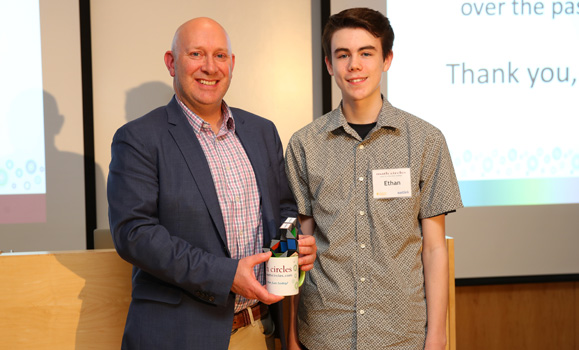 Ethan’s passion for mathematics is paying off. He was recently awarded the coveted Schulich Leader Scholarship and he plans to attend Dalhousie’s Integrated Science Program this coming fall.

“I’m very grateful to the Department of Mathematics & Statistics and Nova Scotia Math Circles for allowing me to develop a passion at such a young age,” says Jason.

This year, Nova Scotia Math Circles celebrates its fifth year of funding with Eastlink. In 2014, Eastlink donated $500,000 to help support the program and to expand its outreach.

Over the past five years, Nova Scotia Math Circles has engaged with approximately 25,000 students across Nova Scotia. Thanks to Eastlink’s support, they have doubled the number of new programs into the classroom and now reach students from elementary to senior high school.

Last year, the program connected with over 7,000 students, from seven school districts and reached all 18 counties in Nova Scotia.  In addition, they have added graduate students, French programming, summer day camps and programs at the Dalhousie Agricultural Campus in Truro.

“We are so proud and fortunate to be part of this program,” says Lee Bragg, executive vice-chair of Eastlink. “As a board member of Dalhousie’s Faculty of Management, I’ve seen first-hand the commitment that this school brings not only towards academic excellence but, as importantly, towards the engagement of students across all grade levels, from inspiring kids in math at an early age to supporting them as they prepare for what’s next in their academic careers.

“I applaud Dalhousie on the numerous and long-lasting benefits this program has brought to students, teachers and schools across the province.” 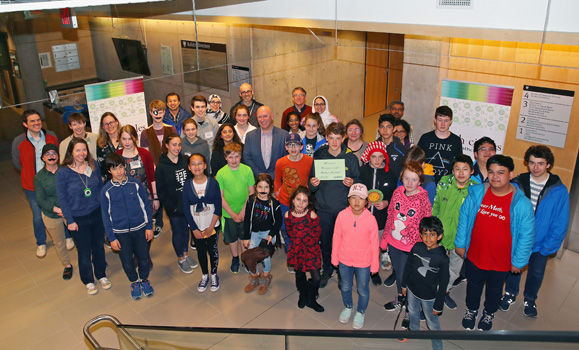 No one is more grateful than Mayada Shahada, director of Nova Scotia Math Circles.

“It’s all about seeing their smiling faces,” explains Dr. Shahada. Over the past two years, Shahada has influenced the development of Math Circles. “Our aim was to expand the program and to approach different communities across Nova Scotia – and we’ve done that.

“I always believe you have to start early – especially if you want to grab their attention. The earlier you can do that the better.”

Nova Scotia Math Circles gets creative and uses fun shapes, sound effects and even visual objects to teach math to young children. “Math is an abstract subject. For young children at the elementary level they have to see it and touch it,” says Dr. Shahada.

Nova Scotia Math Circles now visits schools in Truro, Yarmouth and Cape Breton. Approximately 60 percent of these schools are in Halifax. Dr. Shahada explains that visiting a school in a rural area can take up to two to three business days.

“It’s all about the quality of the visit. Our goal isn’t necessarily to grow in numbers but to cover an entire school in rural areas of Nova Scotia,” says Dr. Shahada.

Student aren’t the only ones benefiting from Nova Scotia Math Circles. This spring, Dr. Shahada developed a presentation for teachers to assist with problem solving. “We had 61 teachers participate and we hope to host another session at a teachers conference next year,” says Shahada.

What’s next for Math Circles? To build on this momentum. Nova Scotia Math Circles plans to continue its current programming with the hopes of reaching new areas of the province to enrich the lives of Nova Scotians in all areas of mathematics.