The stars have enthralled the imagination of humanity for centuries — but theatrical works which centre around the stars don’t always capture the magic and whimsy that the stars inspire.

Such is not the case with the Fountain School’s production of Emmanuel Chabrier’s L’Etoile, directed by David Overton and adapted by Jeremy Sams, which runs through Sunday (Feb. 3) at the Dalhousie Arts Centre. An opera set in the fairytale kingdom of King Ouf (James Whitley) — an aristocrat whose onomatopoeic name conveys a great deal about his character — the production is rife with comic absurdity and fun.

That fun will also be accessible to audiences who might not traditionally be able to enjoy a live opera experience. The matinee performance on Sunday, February 3 at 2:30 p.m. will be a sensory friendly performance presented in partnership with Autism Nova Scotia.

This involves a number of different accommodations, including lower sound levels, a reduction of loud sounds and strong lights, extra staff and support on site, and allowing audience members to talk and move around during the performance. (Full details can be found on the Fountain School's website.)

Jerome Blais, associate director of production with the Fountain School, confesses he knew very little about sensory-friendly performances when the school’s director, Jacqueline Warwick, brought the idea forward — but the response from everyone in the Fountain School has been incredibly positive.

“Our whole team has worked particularly hard to make this happen, and the collaboration with Autism Nova Scotia has been immensely enriching for us,” he says. “Being involved in the community is an important part of the Fountain School’s mandate. With this particular initiative, we are particularly excited to present some of our productions to an audience for whom accessibility to the performing arts may be a challenge.” 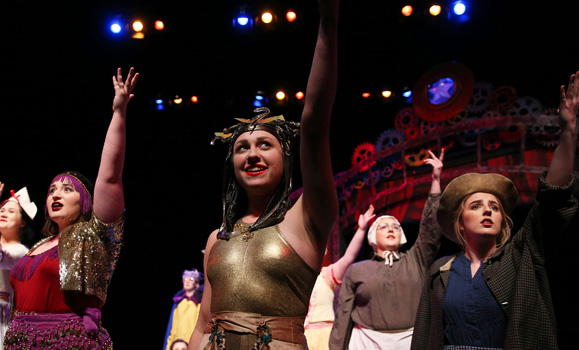 "Concerns with lights, sound, and abrupt actions on-stage can be difficult for many," she says. "We're fortunate to have community partners like Dalhousie University's Fountain School of Performing Arts, who recognize the importance of fostering accessible experiences for all members of the community."

L’Etoile literally means “the star”, and the importance of the stars in this opera cannot be understated. Much, indeed arguably all, of the action is prompted by the prophecies of Siroco (Alexandra Thackray), King Ouf’s astrologer. “In the universe in which the opera is set, the characters believe their fates are determined by the stars and cosmos,” says costume designer and Dal alum, Emlyn Murray (BA Theatre ’14).

King Ouf spends much of the play unaware of what is really going on, and his dim-wittedness often causes the other characters to roll their eyes or sigh in exasperation. The king happens upon a pauper called Lazuli (Ruusu-Maria Brousseau) who makes his living as a beautician, and who has fallen in love with the king’s (disguised) fiancée, Laoula (Julia MacVicar), who is unaware that she is to be married to the king.

King Ouf selects Lazuli to be executed at an annual festival, what follows is a convoluted series of events wherein the balance of power shifts among the colourful ensemble of characters. Whitley and Rianna Robinson (who plays Aloès) describe the opera as a “frivolous story of love and loss, of rivalry and revelry, of exuberant characters whose fates cross paths like the stars in the sky.”

This faith in the power of the stars plays heavily into the design of L’Etoile. The costumes and sets are stunning to behold; based on the images of toy theatres and animatronics, the characters “really pop onstage as if they were colourful dolls,” explains Murray. “Picture a windup toy: it’s colourful and entertaining, but clearly visible are the gears and strings which give the toy its calculated movements.” 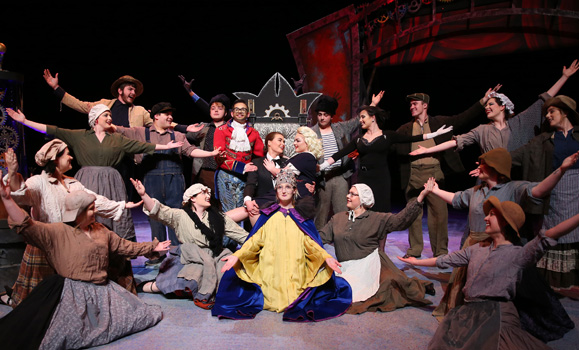 Choreographer Véronique Mackenzie describes the movement in the show as “quirky”, with “hyperbole of gesture and dramatic shifts in the movement energy.” The movement which Mackenzie has worked with Overton to produce emphasizes the overall sweetness of the opera, while also bringing out the spicy undertones of the text.

L’Etoile is not only visually dazzling, with set design by student Danielle Wilson, but also the music itself seems to audibly sparkle and gleam, and sounds surprisingly modern. Music director Michael Donovan acknowledges Chabrier’s “poignant lyrical and poetic moments which capture the humanity of Lazuli’s character, amidst all the surrounding frivolity.” There is no shortage of frivolity and silliness in L’Etoile; but as Donovan quips, “Who doesn't like laughter and memorable melodies?”

For director David Overton, the purpose of L’Etoile is simply “to entertain and delight… it’s a show that’s designed to be pure entertainment.”

Brousseau, who plays Lazuli, believes that “there is a little something for everyone in the audience to enjoy.” She says that “in some ways, [she envies] the audience’s chance to see it all come alive in front of them” for the first time.

“It’s like a story that kids made up, that makes sense, but is not meant to be understood,” Donovan suggests. The image of the toy theatre, then, is aptly utilized, as L’Etoile invites audiences to embrace their inner child and lose themselves in the absolute joy of the show.

L’Etoile is much like the Lazuli’s lucky star: it gives us hope for a happy ending for humanity — for some sugar, and some spice, and just maybe, something nice.