Incoming international student Laith Sari’s approach to settling into life at Dalhousie is simple: meet as many people as possible.

Understandably, he jumped at the chance earlier this week to join other new students on a walking tour of Studley Campus as part of Dal’s international orientation.

“I like to meet people and greet people, so I’m just introducing myself to everybody,” says Laith, who grew up primarily in the United Arab Emirates (UAE) with family links to Palestine and Jordan.

Of the many places visited on the trek, Laith says he felt most drawn to the International Centre in LeMarchant Place — the starting point for the tour.

“It seems like a nice hangout spot. You can just chill or study and find people around. There’s a few pianos and games, which is nice,” says the 17-year-old, who plans to study a variety of arts and science courses this year, with an eye towards eventually transferring into Engineering or Architecture.

An avid swimmer and sports enthusiast, he says he also plans to spend a lot of time at Dalplex and has already signed up to try out for the men’s soccer team.

While Laith already seems well equipped to adjust to life in Canada and at Dal, not all international students settle in so easily.

A lot to learn

Kewoba, a former international student at Dal herself, originally from Dominica, served as coordinator for this year’s international orientation activities and says the aim of the week is to make the transition as smooth as possible.

In addition to campus tours, the week’s programming includes everything from social events and an official welcome from Dalhousie President Richard Florizone and others to information sessions about practical considerations such as setting up bank accounts and phone services, securing Canadian identification cards or drivers’ licenses, and buying furniture and other living supplies.

“We try to help them with all those pieces because we know they’ve got a short window before classes start and it can be a lot for some young people,” says Kewoba. 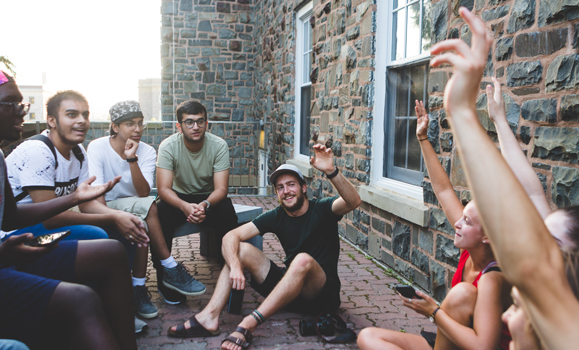 Preparing students for the academic side of university life is also an important part of the week’s programming, with sessions on a variety of topics: following university regulations, taking advantage of Dal’s On Track Program, and getting to know different faculties and programs.

Kewoba says one of the main goals of the week is making sure more students feel as comfortable as possible making new friends and building support systems.

“That nervousness of introducing yourself to somebody in what is probably your second or third language can be tough,” she says.

She says volunteers advise new students on ways to make connections with other individuals from their own country, but also with people from other countries as well, including Canada.

In other words, they encourage them to be a bit more like Laith.

“I’ve tried to introduce myself to everybody, including the staff,” he says. “I don’t want to be known as a number, but more as a name.”

Visit the International Centre online or in person for more information and resources.