Another step closer to his goal

In a couple years, Cal DeWolfe will be practising law in an Atlantic Canadian city — at least that’s the plan. He’s from Bridgewater, N.S. and wants to stay in the East Coast.

In fact, it’s one of the reasons he chose Dal for his Law degree.

“I did some research,” he explains, “and discovered that Atlantic firms like people who are from Atlantic Canada but who also go to school here because they know you want to stay.”

When you add the fact that his mom had good things to say about her time at Dal, Cal admits, “it was a pretty easy choice.”

The decision to study law started as a joke; Cal was always arguing with his parents and they suggested he’d make a great lawyer.

But then he began to think about it more seriously. “I realized I actually might want to do it,” he says. “So, in high school I started structuring everything I was doing to eventually get to law school.” 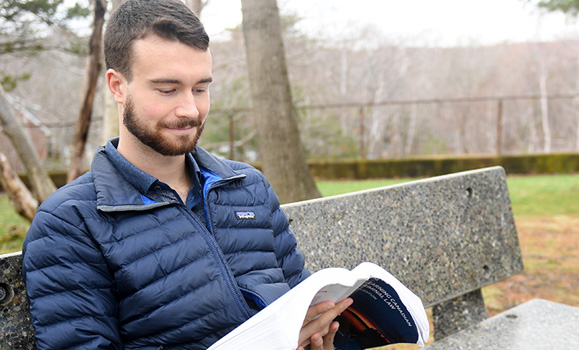 Cal’s route started with an undergraduate degree in Philosophy from St. Francis Xavier University. Though he wasn’t fully sure how he’d use it at the time, he’s now finding it quite useful. From knowing how to structure an argument to being comfortable with abstract concepts, Cal’s been applying much of what he learned to his legal studies.

“You develop skills in a Philosophy degree and you know you’re getting better at them but you wonder if you’ll ever be able to use them other than writing a Philosophy paper — Law showed me that you can.”

Though Philosophy was the right choice for him, Cal’s favourite part of the law program is that there’s no one path — people come into it from a variety of programs. The Schulich School of Law is also known for welcoming students from across the country and around the world, which results in an incredible range of perspectives.

“The class is really diverse,” Cal says. “People come from all sorts of undergraduate backgrounds and different walks of life. It’s cool to meet people who have such different experiences but then are all coming together to study the same thing.”

While he first began planning his future in law, Cal was also discovering a passion for cross-country running. He was a member of the varsity cross-country team during his undergrad.

“Running and cross country has been a pretty big part of my life since junior high school. And then at StFX, it kind of took over my life.”

Cal completed his Philosophy degree in four years, so he had one more year of varsity sport eligibility when he came to Dal — and he didn’t want to waste it. He joined the Tigers and won Cross Country MVP, helping the team bring home its first AUS men’s cross-country title since 2010.

“I knew a lot of the Dal runners because I competed against them for four years,” he recalls. “There’s a lot of camaraderie in the AUS conference because it’s a smaller conference, so it was easy to fit in with them.” 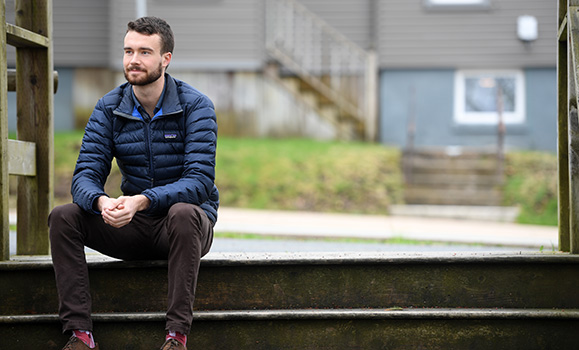 Though he’s no longer eligible for competition, Cal’s hoping to stay involved with cross country, possibly training with the team to help motivate them.

“I’m going to miss it,” Cal says. “Rich Lehman was a great coach and it was a blast spending my last year with this team.”

Cal admits that combining the first year of his Law program with competitive sport was a challenge. Fortunately, the Law School has a deferral option. “I applied to defer one course, Criminal Law,” Cal explains. “It’s a special option Law presents students who anticipate having heavy commitments through the year.”

The deferral allowed Cal to fit in his cross-country workouts and he’s taking the Criminal Law course this semester.

Once he’s done his classes, Cal will spend the rest of the summer as a legal intern, and is looking forward to getting a closer look at the profession and figuring out which area of law is the right fit for him.

“I’ll be at Stewart McKelvey in Charlottetown and I’ll get to do a rotation,” he explains. “So, I’ll be shadowing lawyers working in different departments to get a taste for the practical side of law. After the summer, I should have a pretty clear idea about what I want to do.”