Bringing the joy of Bhangra to the world

The Maritime Bhangra Group didn’t plan for their trip to Peggy’s Cove last month to become any sort of sensation.

“It was just another day,” says Kunwardeep Singh, the group’s co-founder. “We often go to that place because it’s so beautiful.”

The group, which started as a student group on campus and transitioned to a charity-focused professional dance troupe this summer, has been filming short videos of its members dancing in public: one at the CN Tower, for example, and another at Point Pleasant Park. It’s a way to showcase their love of Bhangra dancing in a novel and interesting way.

“We just go anywhere and dance,” says Hasmeet Singh Chandok, Kunwardeep’s brother and also a co-founder of the group.

“We went [to Peggy’s Cove], decided the steps during the travel time, we shot the video and it came out in one or two takes,” says Kunwardeep, who performs in the video alongside Davinder Singh (no relation). “It was just something to put on our [Facebook] page.”

The video, shot on an iPhone and set to the song “Jatt Mele Aa Gya” by Punjabi singer Ranjit Bawa, was uploaded on September 23. The pairing of the traditional Punjabi dance with the iconic Peggy’s Cove background struck a chord and quickly went viral. It’s racked up 1.1 million views on Facebook alone, plus nearly 200,000 more on YouTube. The video has been covered by media outlets across Canada and around the world, including CBC, CTV, BBC, the Huffington Post, Buzzfeed and more. It was featured on A-Plus (the digital media company started by actor Ashton Kutcher — that video has 9 million views) and on the Facebook pages of Kutcher and rapper Lil’ Wayne.

“I’ve said this in every interview: we don’t really know what’s special about it, or what’s special in what we do,” says Hasmeet. “There are groups that do this much better than us, but this one blew up and got so much attention. It’s great to see people getting so excited about it.”

If you’ve been at various Dal cultural events over the past few years, you’ve probably seen the members of the Maritime Bhangra Group in action. They’re a frequent highlight of events like International Night and the Student IMPACT Awards.

The group is very proud of its Dal connections. Hasmeet is currently completing his Master’s of Computer Science degree at Dalhousie, and was a recipient of one of Dal’s Board of Governors awards last year. Kunwardeep is a Dal alumnus, having graduated with his Master’s of Internetworking two years ago. (He’s now an IT security analyst with NTT Data.) Two other members of the group, Harpreet Singh and Chirag Sharma, are Dal alumni, while another, Deepinder Singh, is a Dal student. (Other members are Bikramjit Singh and Davinder Singh.) 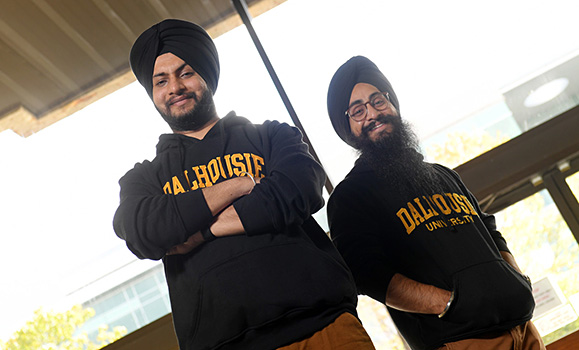 The group started a few years back as an offshoot of the Dalhousie Sikh Student Society. It performs Bhangra, a traditional dance from the Punjab region of India (and where both Hasmeet and Kunwardeep are from). While it originated as a martial dance, Bhangra has deep connections to the region’s agricultural traditions.

“In old times, when farmers finished harvesting their crops, they celebrated doing Bhangra,” explains Kunwardeep. “They’d go to fairs and festivals like Vaisakhi and celebrate by dancing.”

“The expressions you have on your face: that’s the most important thing,” says Kunwardeep. “People see you and they smile too.”

This summer, at Hasmeet’s prompting, the group made the decision to move beyond dancing for fun and at the occasional campus event. Now, they mix paid performances with charity gigs, all based around a common goal of making a difference.

“With this dance, we can deliver a social message: we can talk about the identities we have, who we are, where we come from,” explains Hasmeet. “I like how we can use this dance to get a message out there and bring change.” 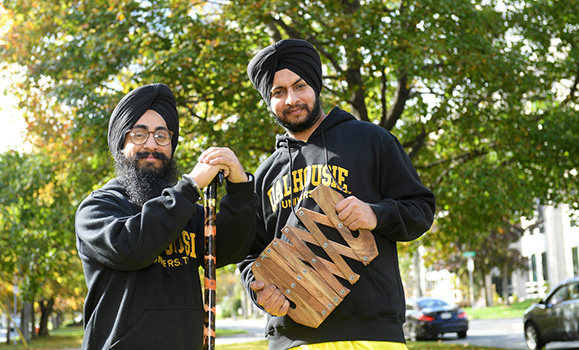 And he doesn’t just mean change for his own culture or religion. The group takes part in a wide variety of performances and collaborations in the community. It recently performed at an IWK Foundation fundraiser, and next week will be performing at Cape Breton University and the Cape Breton Regional Library in Sydney. Future gigs include a collaboration with Big Brothers, Big Sisters and a performance in Halifax this February to mark UN World Interfaith Harmony Week.

The group is also seeking to collaborate with First Nations communities, and is planning a project with Dalhousie Professor Dr. Christine Chambers focused on children’s pain.

“It’s about using what we do to help bring awareness to these groups and causes,” says Hasmeet.

The group also hopes its success inspires others to express themselves and their culture through art.

“We really feel positive about how one 55 second dance video brings change,” says Hasmeet. “We hope it inspires others to do their own act of kindness. It doesn’t matter how you do it: any art you have, just put yourself out there and see how many things you can do with it, what change you can make happen.”

Follow the Maritime Bhangra Group on Facebook, and read Dalhousie Libraries' profile of Hasmeet (who works with the Libraries as a navigator) and the group.