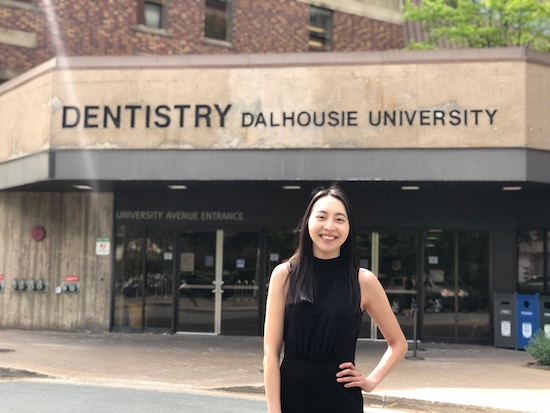 Debby Chao had read the story about how Emily Bonang heard she had won the Dr. David Precious Gold Medal in Dentistry last year: the email from the dean, the request to call her, and then the phone call itself.

“So when I received an email from Dr. Davis asking if he could give me a call, the thought crossed my mind that this could possibly be the reason.”

Even so, Debby says that she was nervous about the call and both “surprised and honoured” to receive the news that she is the recipient of the 2021 Dr. David Precious Gold Medal in Dentistry. The award caps off four years of dental school during which Debby achieved top marks in her class. She graduates with distinction and five additional awards.

Why dentistry?
With a father who is an orthopaedic surgeon and a mother who is a nurse back home in Taiwan, Debby says that she grew up in a “health care-focused” environment. But the more compelling reason for choosing dentistry as a career, she admits, is that she had “terrible teeth” as a child. A traumatic accident broke many of her baby teeth and her fondness for sweet things also took its toll. As a result, she was a “frequent visitor” at the dentist’s office during her childhood and then the orthodontist as she grew older.

She was never scared going to the dentist, Debby says, and always had great experiences on her visits. She particularly appreciated the work of her orthodontist and the positive impact it had on her confidence. By the time she was in high school in Nova Scotia, Debby had set her sights on becoming a dentist herself.

After high school, Debby went to Dalhousie where she studied for a BSc with honours in microbiology and immunology, which fueled an interest in antibiotics and antimicrobial stewardship. She was accepted into the dentistry program right after finishing her undergrad degree.

Right from the start, she was certain she had made the right decision. “I like all aspects of dentistry,” says Debby, “It gives you a lot of variety in a day, plus there is the hands-on aspect.” She particularly enjoyed patient interaction. “You learn a lot from people by listening to their stories.”

During the summers Debby was able to continue to participate in research in antimicrobial stewardship and she says she benefited from many mentors among the faculty members and the support of her family, partner, and classmates.

Finishing the last two years of dental school during a pandemic was not ideal for Debby and her class. “We missed clinical time last summer, I found the online lectures challenging, and we couldn’t hang out with each other in the way we normally would. But you learn how quickly people can adapt.”

Given her interest in the broad scope of dentistry, it is not surprising that Debby has opted to return to Dal for another year to pursue a general practice residency (GPR). “I want to gain advanced skills and knowledge. Maybe an interest in a speciality will emerge from that, but right now I like the idea of having the ability to be able to do many things.”