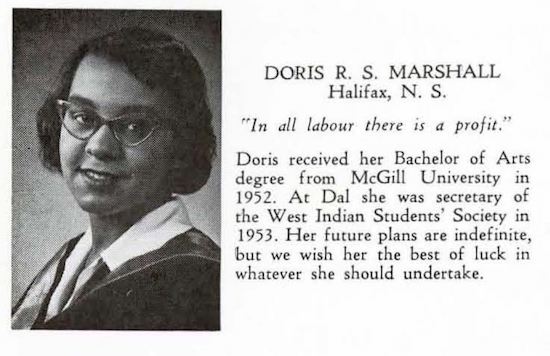 In 1951, Dr. J. S. Bagnall, dean of the Faculty of Dentistry (1947-54), met with Mrs. Marshall, an immigrant from the West Indies, to discuss her daughter’s interest in studying dentistry at Dalhousie.

Dr. Bagnall was honest, but not discouraging. He felt that her daughter would find the already intense training very challenging, and admitted as much to Mrs. Marshall. But he recommended that she apply.

Believing that “opportunities are there for Negroes if they will only take advantage of them,” Mrs. Marshall supported her daughter’s decision and Doris Rosalind Marshall applied to study dentistry. In 1952, she became the first Black student in the Doctor of Dental Surgery program.

The path to dentistry
Born in Halifax in 1924, Marshall attended Bloomfield High School. After graduation, she took a job as a secretary, but she did not find the work fulfilling. She decided to pursue a college education and was accepted at McGill University in 1948.

Marshall studied for a bachelor’s degree in philosophy and psychology. She was also an active member of the long-established West Indian Students' Society, which promoted knowledge and understanding of the West Indies to the general student population through different social and cultural activities. Members also helped recent students from the West Indies adjust to living in Canada.

At McGill, Marshall noticed that many of her female classmates were planning secretarial careers after graduation. But she decided to pursue a profession.

She said she chose dentistry for several reasons. “To begin with, I liked the idea that it was a health profession through which I could render a service. I also liked working with my hands . . . Another motiving force was that, as a young adult, I had a great deal of dental treatment myself. . . My family dentist was able to save all my teeth without a single extraction. That in itself is a tribute to the dental sciences and I credit that dentist to a great extent for my career.”

First McGill, then Dalhousie
In 1952, Marshall began studying dentistry in the Forrest Building at Dalhousie. Her brother Ernie was close by, studying in the Faculty of Medicine. He would graduate in 1955.

Marshall’s classes reunited her with the family dentist who had saved her teeth years before; he was now one of her instructors. In her free time, she was an active member of the Dalhousie West Indian Students' Society, and during the summers she worked as a playground supervisor.

In 1956, four years after taking her first dentistry classes, Doris Marshall walked across the stage at the convocation ceremony with her Doctor of Dental Surgery degree.

Soon after graduating, Marshall left Halifax, finding that the Nova Scotia of the 1950s was not an easy place for a Black person to get a job. She moved to Brantford, Ontario, and became a school dentist. There she met Walter Harris and they married on December 17, 1960. Marshall and her husband lived in Toronto briefly before moving to Teaneck, New Jersey. 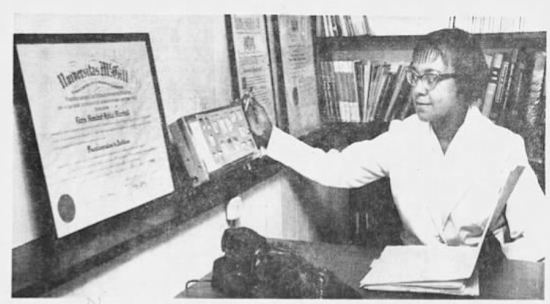 An advocate for women in dentistry
As Dr. Harris, Marshall thrived as a dentist in New Jersey. She received a fellowship in pedodontics from the Guggenheim Dental Clinic in New York City and set up a private practice at her home.

She found “a great joy of restoring a badly diseased mouth and bringing it back to good health.” She also helped patients overcome their fear of going to the dentist, finding it rewarding to “see someone who hasn’t been to a dentist for years be so pleased and thrilled with your work they become a patient on a regular schedule.”

Marshall retained her Dalhousie roots and served as the president of the Dalhousie Alumni Club of New York. She was interviewed twice in New Jersey on the then-novel topic of being a female dentist. On both occasions, she made a point of saying that she had graduated from Dalhousie’s Faculty of Dentistry and spoke highly of the faculty members.

Marshall took every opportunity to promote dentistry as a career for women. She highlighted the various sub-specialities that dentistry offers as well as the flexible schedule and different practice options available.

She encouraged “interested girls to become dentists because there is certainly a place for them. They have patience, manual dexterity, and a feeling for fine details, and all of this is an asset as far as dentistry is concerned.”

Marshall died at age 63 in January 1987. She was survived by her husband, brother (Dr. Ernie Marshall), sister, Elaine Liverpool, and Elaine’s children. Her body was cremated in Paterson, New Jersey. 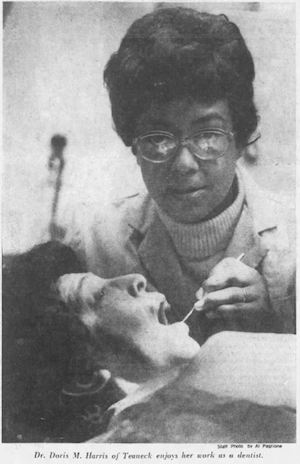