Dr. Lary Trites: Serving his country and his patients 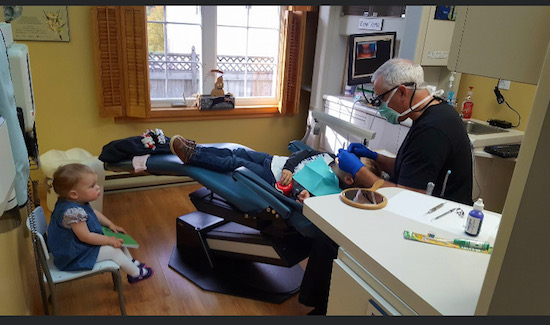 Holding the suction tube for Saint John dentist Dr. Carl Tilley (DDS’71) while his older brother received emergency after-hours dental treatment convinced the then 16-year-old Lary Trites (DDS’86) that dentistry was for him.

“I didn’t really know a lot about what the job was like, but I felt that it was something I could do,” says Dr. Trites, explaining his early decision to study dentistry.

Lary Trites grew up in Saint John and completed the first year of a biology degree at the University of New Brunswick Saint John. When the family moved to Sackville, Lary switched his studies to Mount Allison University. There was no human anatomy program available, so he focused on plants, graduating with a BSc (Honours) in 1981.

Lary maintains that studying plant biology as a precursor to dentistry provided a good foundation. “It’s all about learning the process of science,” he explains, “which was invaluable to me when I started dentistry school.”

Mount Allison was also where another important strand of Lary’s life took root. During his teenage years in Saint John, Lary’s summer and part-time jobs including working the assembly line in an Irving Oil packaging plant and pumping gas in a service station. “I knew I didn’t want to do this for very long,” says Lary. “It reinforced the need for me to get an education.” 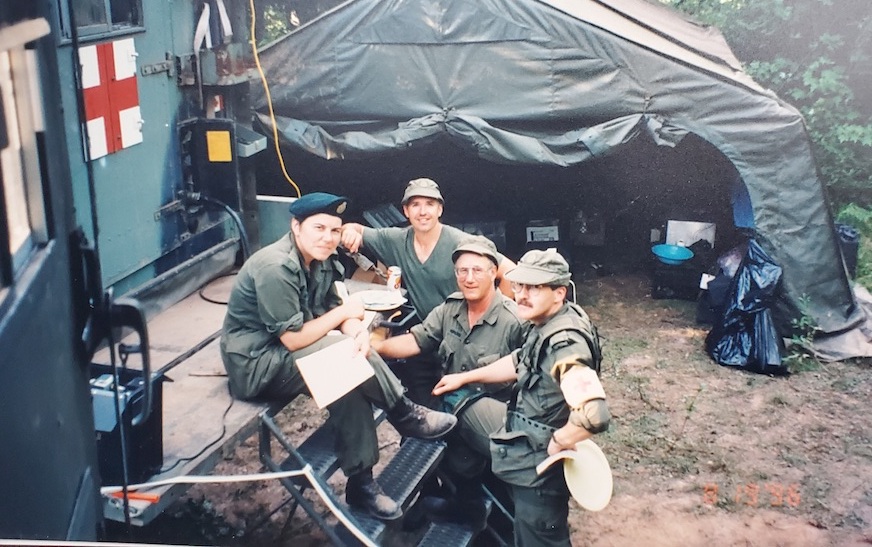 A new direction
One day in the university sports centre, Lary saw an ad on the athletic department bulletin board that said “Do you want to make $3000 and travel?” Lary took one of the pull-off strips of paper and called the phone number, thus opening the door to 28 years as a Canadian Forces reserve officer.

Lary was one of just 60 university students from across Canada accepted into the three-year Naval Reserve Officer Training Program (NROTP), which would commit them to spending their summers training at different Canadian Forces naval bases plus one evening a week and one weekend a month during the academic year.  “It was harder than dental school,” he says, “and it changed my life.”

Lary describes a very structured program of academic studies combined with learning skills, such as navigation, and leadership activities. At the end of each summer, it was necessary to pass exams and assessments in order to proceed to the next level. At the end of the three years, Lary was qualified as a Reserve MARS (maritime surface) officer, one of just nine students who graduated from the program.

Arriving at Dal
Lary’s first application to the Dalhousie Faculty of Dentistry was not successful. “I don’t like to lie around,” he says, which was why he worked quickly with the help of some of his Mount Allison professors to apply for a one-year MSc program at Dal.  Dr. Tony Bidwell, an Izaak Walton Killam professor, agreed to be his supervisor, and Lary began his coursework and research on the physiological effects of acid rain on bean plant leaves.

A second application to dental school was successful and Lary received the good news in February 1982.  But the research for his master’s thesis spilled over into the next academic year, leaving Lary juggling the demands of first year dental school, completing the requirements for his MSc, and working for the military one evening a week and one weekend a month.

It was a challenging time. “My participation with the Reserve Navy certainly helped me keep my focus on the end result and I feel I was well prepared to handle the stresses,” says Lary.

With his MSc experiments completed in 1983, Lary wrote up his thesis and defended it in July 1984. That summer, he married his wife Kathleen (DDH’86), a health education student whom he met when they both had meals in Sherriff Hall, enjoyed a brief honeymoon in Saint Pierre et Miquelon, and then they both returned to classes. Lary graduated with his MSc in the autumn of 1984, followed by his DDS in 1986. He was the only person to graduate from a graduate studies program while studying dentistry at the same time.

The DDS class of 1986 was – and continues to be – a close-knit group. Lary says dental school was a great experience for him and he enjoyed sharing his goal of becoming a dentist with classmates who came from very different backgrounds. He also valued the emphasis placed on teamwork and service. “Being able to develop your place in society is very important,” he says, “and giving back is critical to promote good relationships.”

After graduation, there was no question about what Lary would do next: he returned to Sackville with Kathleen and they started a practice. “I like the community, there was an opportunity for a dentist, and I could work with Kathleen,” he says. “Everything was in place.”

At the same time, his work with the Canadian Forces continued. Lary ran the student NROTP program at Mount Allison from 1986 until the program ended in 1995. He also switched from the Naval office to the Reserve Army so that he could join the Reserve Dental Platoon started by Dr. Susan Roberts (DDS’74)

Lary continued to serve the Canadian Forces one weekend a month. As a dentist in the reserves, he screened troops for UN deployments at reserve units around the Maritimes. He and the other members of the dental team would carry out their work using dental chairs in the back of a 2½-ton field truck, with instruments powered by a portable 5 KW field generator.

Prison routine
When Lary’s brother Brian (DDS’95) graduated from dental school and decided to join him in his practice, Lary saw an opportunity for a change from his solo private practice routine. He reduced his hours and accepted a contract with the Correctional Service of Canada to work two days a week at Dorchester Penitentiary and the Westmorland Institute.

Surprisingly, he describes this change as the chance for a “relaxed day”. Instead of his regular 8:00-5:00, five-days-a week routine in his practice, providing dental care at the prisons gave him the option of working in the afternoon and evening, which fitted in well around the prisoners’ education programs and gave Lary the mornings off.

He speaks positively of the experience, saying that he built good relationships with both the prisoners – who are “people like you and me” – and the wardens. Although his clinic was equipped with a big red panic button in case of trouble, Lary says he never needed to use it.

When Lary’s brother specialized as an orthodontist and started his own practice, Lary returned to his office full-time. He spent 32 years volunteering with the Atlantic Provinces chapter of the Academy of General Dentistry, helping to provide continuing education courses and speakers to general dentists in the Maritime provinces. In his free time, he enjoys skiing, curling, and golfing (particularly with other class of ’86 members) and is an umpire with the Nova Scotia Curling Association.

In December 2018, Lary sold his practice to East Coast Dental Group and committed to work there for two years. But in February this year, he was diagnosed with non-Hodgkins lymphoma and has been off for the past few months so that he can receive treatment. “I’m recovering and I feel good,” he says.

Although he is looking forward to the next change – possibly working as a locum – Lary appreciates what 34 years in his own practice have enabled him to do to help patients within his community. “You can sense when patients’ treatment choices are being governed by their ability to pay,” he says. “In those cases, I could choose to do the work for minimal or no pay. In the end, it was not about the money, it was about the care.”