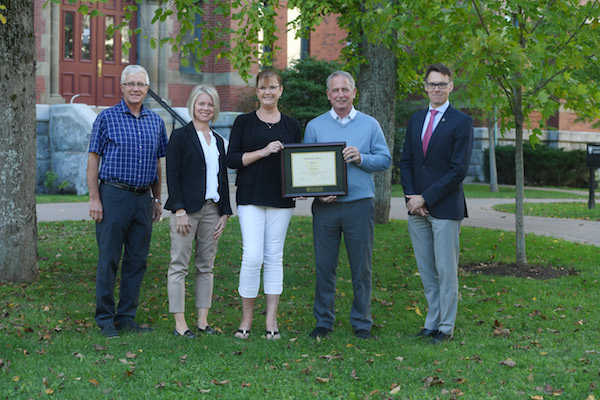 Dr. Eric Hatfield (DDS’86) is the 2020 recipient of a Faculty of Dentistry Outstanding Alumni Award. Sadly, Dr. Hatfield died of an aneurysm on January 20, 2020, on his way home from a National Dental Examining Board meeting in Ottawa. The award was presented posthumously to Jennifer Hatfield, Dr. Hatfield’s sister, and Dr. Rick Raftus, a close friend from the class of 1986, at a small presentation on the quad outside the Faculty of Dentistry on October 6. The award will be displayed at Dr. Hatfield’s former practice, Yarmouth Dental Group.

Ask anyone who knew him – family member, former classmate, work colleague, fellow volunteer in organized dentistry – and the same words and phrases to describe Dr. Eric Hatfield come around again and again: ‘humble’, ‘always smiling’, ‘he knew everybody’, ‘level-headed’, ‘generous’, ‘dedicated’, ‘all in’, ‘well respected and liked’.

Dr. Hatfield was just 60 years old when he died. He had been deeply committed to both his practice and organized dentistry for over 30 years.

In the beginning
Eric Hatfield grew up in Cape Sable Island, at the southernmost tip of Nova Scotia. He was the eldest of five children.

His sister Jennifer Hatfield says that her brother was the “only kid in the area at the time to have braces” and that their mother had to bring him up to Halifax once a month to see an orthodontist. That may have piqued his interest in dentistry, she says.

Another factor may have been his summers spent mackerel fishing to help finance his undergraduate degree at Dal. The chilly 3:00 am starts and a bad experience that landed Eric overboard certainly made him realize that fishing was “not for him”, says Jennifer.

Dr. Chad Avery (DDS’12), a partner in the Yarmouth Dental Group and Jennifer’s son, says that his uncle was always “interested in science and healthcare and giving back to his community”. In the early 1980s, when Eric would have been considering his education options, there were just one or two dentists practising in Yarmouth, so there was a local need. 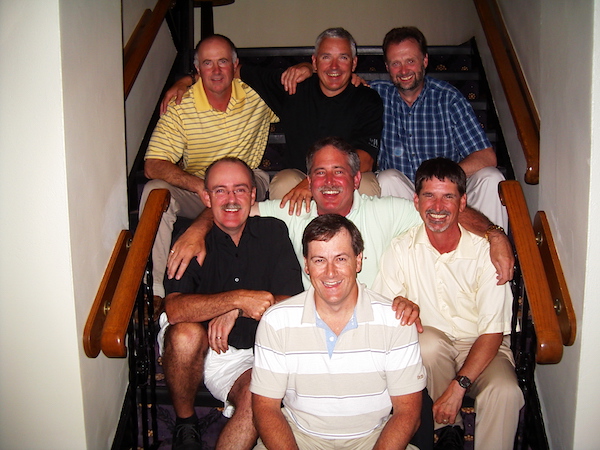 Dr. Bill MacInnis (DDS’70) taught general dentistry at the Faculty when Eric was a student. What stood out for him was Eric’s great interest in his patients. “He was caring and empathetic and his communication skills were great,” he says.

“A regular guy who wanted to do good,” is how classmate Dr. Lary Trites (DDS’86) describes the Eric Hatfield he met in dental school.

Eric received prizes in orthodontics and oral surgery during his four years of dentistry studies and his work ethic carried over into his professional life. What also endured were the friendships forged in the classrooms and cubicles of dental school.

“There was a group of six or seven of us in our class at Dal,” says Dr. David Dignan (DDS’86). “We were always together and we just became more and more close. But it was Eric who was the steady glue of the class.”

The glue held beyond graduation. Dr. Rick Raftus (DDS’86) recalls the class getting together for their five-year reunion in 1991, a tradition which then continued on an annual basis. “All the memories we have with each other, we have because of Eric,” he says.

Committed to organized dentistry
Shortly after graduating, Eric’s involvement in organized dentistry began as a regional representative with the NSDA. Dr. Tom Raddall (DDS’87) says that Eric was “the type of volunteer who arrived at a meeting prepared and ready to work. He had always done all the reading and he wasn’t afraid to take something on.”

Steve Jennex, executive director of the NSDA, remembers meeting Eric in 1991 at the annual meeting of the NSDA, which the Yarmouth regional group was hosting for the first time. A last-minute change had been necessary and people were nervous.

Jennex, who was then in the early days of his career with the NSDA, says that Eric “calmed the waters and the meeting was excellent. In fact, Yarmouth became a favoured place to hold the AGM, I think because it was friendly and less formal. And that was Eric to a T. Nothing ruffled him.”

Dr. Bill MacInnis was president of the NSDA when Eric started to attend meetings as the regional representative. “Eric had ideas and he spoke up. His judgements and analysis were always appreciated.”

Despite the 3.5-hour journey to Halifax, Eric’s involvement grew. He served on every NSDA committee and working group, including chairing the Best Ethical Practice Working Group. “It was a huge job and he took it on,” says Jennex. “But with Eric, you knew that when he agreed to do something, it would get done.”

Eric became president of the NSDA in 1999 when Don Pamenter was CEO. “What struck me about Eric,” he says, “was that he saw his involvement with organized dentistry as a mission, not a job. Dentistry is a self-regulated profession, and he felt that unless good people do good things, it could go south.”

That sense of mission extended to the Provincial Board of Nova Scotia, where Eric served on the board, eventually becoming president. During the last decade he lent his skills to national dentistry bodies such as the NDEB, the CDA, CDSPI, the Canadian Dental Regulatory Authorities Federation, and the Canadian section of the International College of Dentists.

A legacy of inspiring others
As important as his own involvement in organized dentistry was to him, Eric was also deeply committed to passing the ball to the next generation. Dr. Ian Cunningham (DDS’01), a partner in the Yarmouth Dental Group, says that he would never have become involved in the NSDA if not for Eric. “He had the great ability to inspire and motivate friends and colleagues. If you had something to complain about, he’d tell you to come to a meeting.” 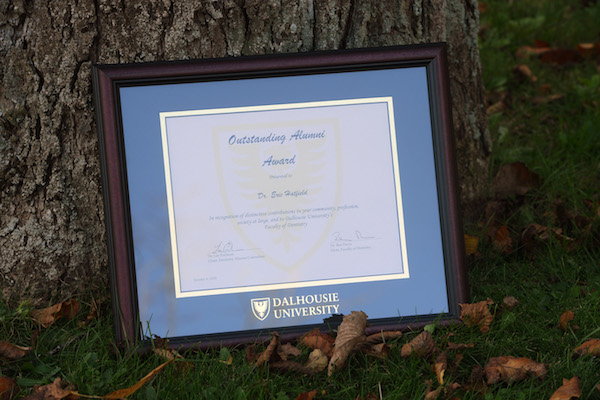 When asked about Eric’s legacy, his family, friends, and colleagues speak about his love and dedication for his profession, his “all in” approach to whatever he took on, his commitment to mentoring the next generation of dentists, and his extraordinary ability to do everything he did humbly, with a big smile on his face, and because it was “the right thing to do”.

The Dr. Eric Hatfield Active Participation Award
This award has been created to honour Dr. Hatfield’s memory and the impact he has had on the oral health profession. It will be presented each year to a student enrolled in their third year of the DDS program at Dalhousie University who is actively involved in extracurricular activities in the dental community, such as committee membership, mentorship of fellow students, and outreach initiatives.

To donate to the fund, please go to giving.dal.ca/erichatfield or contact Victoria Hamilton at 902.497.6825 or victoria.hamilton@dal.ca. 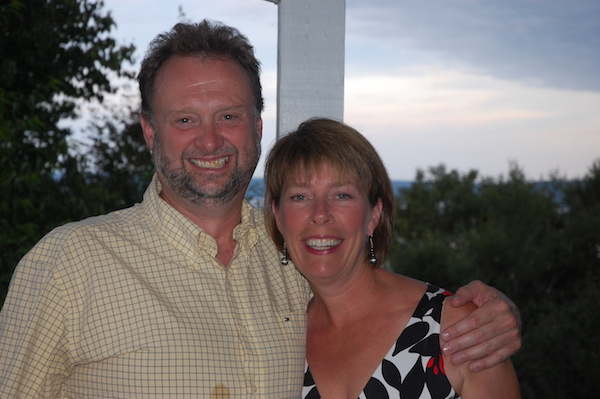