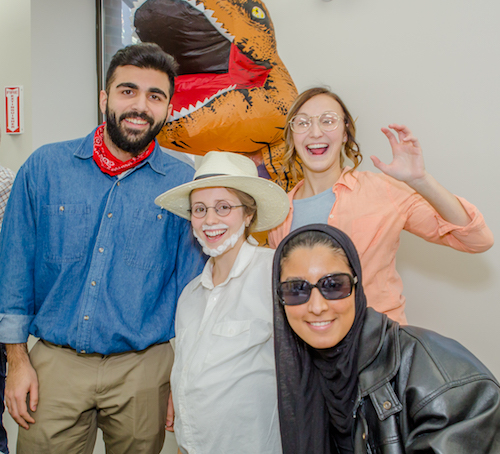 Dr. Bob Loney carried the torch aloft with pride and a huge smile on his face as he led the procession of judges and dignitaries into the simulation lab for the 21st Prosthodontic Olympics. Normally the one orchestrating the event, Dr. Loney – currently on sabbatical – was able to attend the Olympics as an observer for the first time since the event began at Dal in 1997.

Dr. Tanya Cook, who participated in the first Dal Prosthodontic Olympics as a student in 1997, led the planning for this year’s event. Dr. Ben Davis, the recently appointed dean of the Faculty of Dentistry, was there to open the games.

“If as much quality and thought go into the competition as has gone into the costumes and team names, we are in for a great event,” he said. “I’ve always wanted to say this: Let the games begin!” 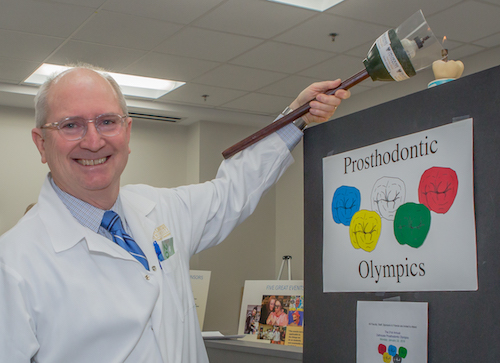 Quality, speed, and dancing
The official fanfare was all well and good, but the undisputed star of the show was the 7’4” T-Rex, aka Eric Kriss, of team JAWrassic Park, who could be found dancing in the middle of the lab as the music blared during events.

Eight teams competed in five events: rubber dam, boxing impression, crown preparation, alginate impressions, and provisional restoration. Each event was judged on quality and speed, with the number of quality points determining the winner in the event of a tie.

Glynis Stewart achieved a new world record for speed in the boxing impression event, with a time of 30 seconds, but Hasan Salim claimed the gold with a full 10 points for quality.

A group of DDS1 students gathered on the sidelines to watch the frenzied activity and nervously anticipate competing next year as DDS2 students.

Tori Brown said, “I don’t like to be rushed, so I hope to be better at these things next year.”

“Nothing like this would happen in my program in Malaysia,” said Justin Yeoh, who was on the Magic School Brush team and competed in the boxing impression event. “I didn’t realize it was such a big thing.”

The event ended with the awarding of prizes and votes of thanks to the sponsors and the many people who helped behind the scenes.

“You are all winners,” Dr. Cook told the students. “You have improved your speed and your ability to figure out how to do things under pressure, which you will need in private practice.”

As for Dr. Loney, he could get used to the new arrangement. “I might let Dr. Cook do this every year. I don’t usually get to watch!” 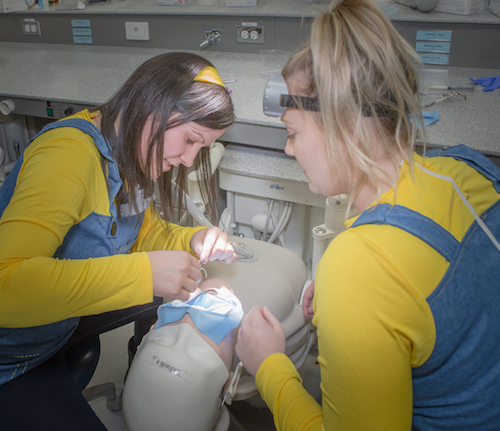 Hard at work on a rubber dam

The winners
The overall winning team and costume prize winner was JAWrassic Park, consisting of Courtney Aube, Hasan Salim, Mai Alotaibi, Alexis Robinson., and Eric Kriss. They had a total of 64 points, including 35 quality points.

Check out the photographs from the 2018 Prosthodontic Olympics. 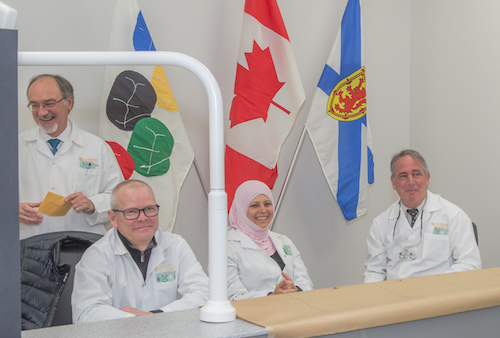