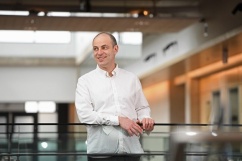 Here We Code will help us add 50 more faculty and researchers over the next five years, including more research chairs in key interdisciplinary areas of focus such as Agriculture, Management and Health.

Listening to right whales in the ocean deeps

Scientists are using algorithms and machine learning to listen for the distinct calls of one of the world’s most endangered animals in a bid to identify where they are and shield them from one of their greatest threats.

Researchers at Dalhousie used a deep neural network trained on thousands of recordings of North Atlantic right whale calls that were collected in the Gulf of St. Lawrence over two years.

The team, which published the findings Monday (April 27) in the Journal of the Acoustical Society of America, used algorithms combined with validation by experts to select out the whales’ telltale upcalls and trained the network to identify the calls as those of a right whale.

They had a success rate of about 90 per cent when it came to identifying the whales’ upcall — a short whoop that lasts about one second and is thought to be what brings whales together.

The innovation could mean that right whales — slow, lumbering marine giants that stick close to the surface, putting them in danger of ship strikes — could be detected by the technology in real time as they pass through an area where there may be vessel traffic.

“It could be a really cost-effective tool to monitor the presence not only of North Atlantic right whales, but other species as well,” says Oliver Kirsebom, lead author and senior staff scientist at MERIDIAN at Dalhousie University.

“It is like a visual representation of the sound. You can separate out the different frequencies and create an image — not of a thing but it looks like an image — and that’s what we give to the network to recognize the upcalls.”

The recordings or datasets were collected through passive acoustic monitoring, a system using hydrophones tethered to a buoy, underwater floats on the ocean bottom and other devices.

They record the whales, but also the sounds of boats, various marine species, ice and other ambient noise. To select out the whale calls, researchers train algorithms to be able to identify the whales’ calls. The method has been used for years, but has been limited by a low performance rate due to noise levels and other factors.

To improve upon that, Dr. Kirsebom and his colleagues with Fisheries and Oceans Canada used a method based on artificial neural networks, which are a set of algorithms modelled loosely on the human brain and designed to recognize patterns. The networks have become a preferred machine-learning approach for solving a range of problems, particularly when it comes to speech processing and image analysis.

Real-time detection could be possible

Dr. Kirsebom explains that they could record five minutes of sounds, which then get passed onto the neural networks and scanned for upcalls. It would make an output file of when the call occurred and that data is transmitted to shore, where it would be examined for possible detections. The network could also provide a more immediate indication of a right whale’s presence in an area through an automated alert.

"Ideally, we hope to use our detection algorithm in the field this season onboard hydrophones deployed in the Gulf of St. Lawrence," he says.

“It can transmit those detections, so you wouldn’t have to wait for people to go out with a boat and retrieve the device — you would get that information practically in real time.”

The information could be used in the ongoing effort to protect the species, which has seen its population plummet to around 400 animals worldwide.

North Atlantic right whales travel from their breeding grounds off the southern States to the Gulf of St. Lawrence and the Bay of Fundy every summer to feed on the area’s rich food sources. But they have suffered heavy losses over the years due to ship strikes and entanglements in fishing gear. Over the last couple of years, more than 20 carcasses have been found in the Gulf of St. Lawrence, prompting the federal government to close fisheries and restrict ship traffic.

“We hope we could use this to inform ships and the large tankers of a whale’s presence. If you get a detection by the network there could be another link that sends a message to the ship. Information could pop up in captain’s information board saying, ‘Look there’s a whale in the area so slow down or divert.’”