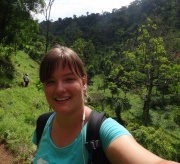 From Nanaimo, BC, I completed my undergraduate degree in Political Science and History at the University of Victoria. Since then, I have been slowly moving east across Canada. I completed my Masters of Arts at the University of Waterloo. My thesis focused on the conflict surrounding cattle raiding in South Sudan, looking specifically at the causes of insecurity in regions experiencing violence and how the breakdown of traditional governance structures has resulted in increased levels of violence.

I took a year off to work in Moshi, Tanzania, as a project coordinator for Jipe Moyo, an HIV/AIDS health outreach group. My work focused on securing sustainable funding to finance outreach projects, as well as building supply chains and coordinating resources in and out of Majengo to Moshi. I also used my year off to work as the policy director for STAND Canada, a youth-run national advocacy group working on the prevention of genocide.

I am currently working with Dr. David Black on my proposed PhD dissertation topic, which seeks to map out the political structures of rebel groups, and offers analysis of the degree of success/failure the respective governments have had in re-absorbing these structures. I will demonstrate how the failure to holistically co-opt rebel structures leads to the re-ignition of conflict. In particular, I will do a case study of two rebel groups, the Sudan Peoples Liberation Army – Nasir (SPLA-Nasir) and the Ex-Forces Armées Rwandaises (ex-FAR).

More generally, my research interest include: conflict and conflict resolution; Canada’s role in Sub-Saharan Africa; politics of rebel/armed groups; women and children in armed conflicts; politics of weak and failed states; the formation of states-within-states; and the involvement of international organizations and non-governmental organizations in conflict and post-conflict countries.