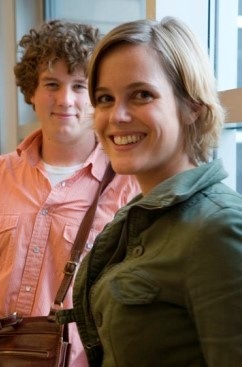 "Wer keine Fremdsprache kennt, kennt seine eigene auch nicht."
("Unless you know a foreign language, you also do not know your own.")

German, the most widely used language in Europe, is spoken by approximately 100 million people as their native tongue in Austria, Germany, Switzerland, Italy, Belgium, and some parts of Eastern Europe. The cultural, economic, and scientific role of the German-speaking countries makes the knowledge of German especially advantageous to the study of most academic disciplines. It may surprise you to know that after English and Mandarin, more books are published in German than in any other language.

The departmental program "German Studies" is the investigation of German culture and its place in the formation of the modern world. The program concentrates on significant aspects of the cultural tradition of the German-speaking countries. From Luther to Nietzsche, Freud, and Marx, German writers have moved people and nations to change the course of the world. The literary and intellectual development of Germany culminated around 1800 in the epochs of "klassik" and "romantik". The authors of this epoch (Lessing, Herder, Goethe, Schiller, Novalis, The Schlegel brothers, and Hegel) founded their writings on a thorough knowledge of the cultural tradition of Europe, especially Greek culture. As scientists, historians, and politicians they described problems and questions of a universal nature in their works. They became the first historians of literature and created the discipline of aesthetics. The universality of the authors of the period 1770-1830 explains their present-day relevance and makes the study of German important and attractive.

Ready to study with us?

The Department of German is phenomenal. The profs are very accommodating and excellent instructors; the TAs are great and help to build oral skills; there are opportunities to study in Germany or other German-speaking countries; and the German society has a couple of fun events each semester, as well as weekly sessions for people of every level to come and practice their German skills.