Bringing back the black ash tree

Posted by stephanie rogers on November 4, 2019 in News
Cody with a Black Ash tree

A unique species of tree which holds significance to the Mi’kmaw is in danger of being lost forever.

Unless the team at Mi’kmawey Forestry has anything to say about it.

Mi’kmawey Forestry is a program within the Confederacy of Mainland Mi’kmaq that carries out forestry-related projects on behalf of the eight mainland Nova Scotia Mi’kmaw communities. Their work covers everything from community outreach events to species at risk conservation projects to working with industry.

The goal of their program is, “to support Mi’kmaw participation in the transformation of Nova Scotia’s forests through the practice and promotion of Netukulimk.” Netukulimk is a Mi’kmaw concept that summarizes the need to live in a sustainable balance with nature today so that future generations can also sustain themselves from the land as we do. One of their current projects is the black ash conservation project.

“Our long term goal is to establish a collection of wild black ash seeds from various Nova Scotian populations of the tree,” Cody explains.

As Mi’kmawey Forestry Stewardship Officer, Cody has been working for the last year to oversee the black ash conservation project and help grow the population of black ash trees in Nova Scotia. The ultimate goal is to conserve this species that has significance to the Mi’kmaw community.

“The black ash is a very significant species to the Mi’kmaw as it has been used to make artwork and everyday items for many generations,” Cody explains. “Material from the ash has been used to create everything from snowshoes to canoe ribs, to baby cradles and hockey sticks. Most notably, however, is the ash’s use as the preferred material for Mi’kmaw splint baskets. The production of these baskets provided an income for many Mi’kmaw families.”

The Mi’kmawey Forestry team is working to grow black ash seedlings, juvenile black ash trees. The seedlings serve as valuable planting stock to establish protected black ash plantations throughout the province. All of their black ash seedlings were grown from seed collected from a very fertile site in Cumberland County in 2014. Some of the seeds will be placed into long-term frozen storage until such a time when conditions in the province may be ready to host black ash once again.

“Black ash grow best in relatively undisturbed forested wetland habitat,” Cody explains. “Traditionally, this habitat has been altered by the forestry industry and by the transformation of wetland areas into agricultural landscapes. The most notable change to Nova Scotia’s ability to host black ash, however, is the recent introduction of the invasive emerald ash borer beetle to the province.”

Adds Cody, “If conditions continue to worsen and black ash cannot be reintroduced to our landscape in the short term, it is hoped that the seed material that we put into storage can be used to establish future populations to ensure that the species’ genetic legacy is not erased.”

By documenting previously unknown occurrences of black ash, the team hopes to improve their understanding of the distribution of the species in Nova Scotia and better prepare to mitigate the risks to the species.

“The most immediate challenge to our work is the threat of damage caused by white-tailed deer,” Cody explains. “Deer selectively browse on ash and can completely strip a seedling bare of its leaves or pull a plant from the ground. We have tried several methods to keep our seedlings safe from deer but have found that the most effective repellent method is to install a fence around the seedlings.” 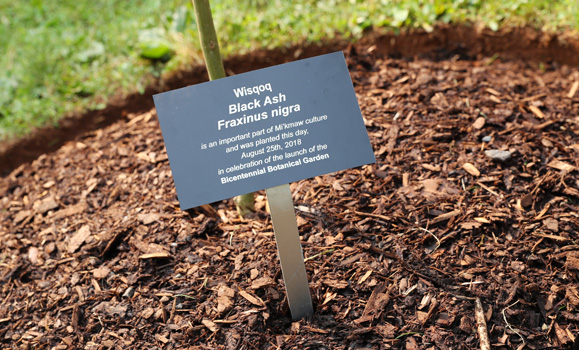 “The horticultural staff on campus provide excellent care for our seedlings and the Friends of the Garden did a great job potting 500 of our seedlings into large containers with a custom soil mixture that they created for us,” Cody explains.

While the project is still in progress, the team at Mi’kmawey Forestry has been working on conserving black ash since 1997. To date, the program has submitted thousands of black ash seeds for long term storage at the National Tree Seed Centre and has established seven plantation sites provincewide. They hope that these plantation sites will one day yield seed themselves to supply future conservation efforts.