Posted by stephanie rogers on January 27, 2014 in News, Learning That Lasts

The Aquaculture Genomics Laboratory, founded a year ago in the Faculty of Agriculture, focuses on using innovative molecular biotechnology to drive scientific discoveries and to respond to industry challenges in the shellfish aquaculture industry.

Under the direction of Sarah Stewart-Clark, the laboratory is directly connected to the oyster, mussel, scallop and lobster fishery and aquaculture sectors in Atlantic Canada. 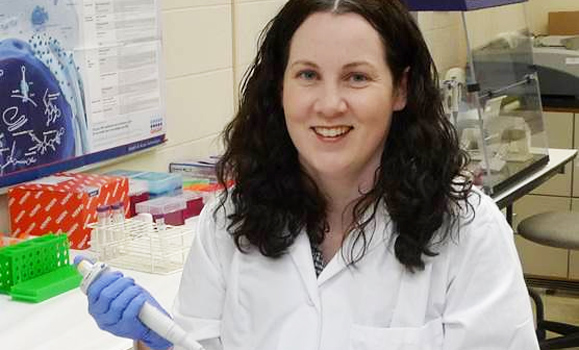 “Our goal is to provide science-based information for both industry members and government managers to best grow this industry forward in Nova Scotia,” explains Dr. Stewart-Clark.

The Aquaculture Genomics Lab, located on the Agricultural Campus, performs monitoring of environmental water samples for both target and pest DNA. Assays (analytic procedures) that can detect when target larvae are present in water samples enable growers to make decisions about when to place spat collectors in the water to gather their seed product.

“We also have assays that can detect pest species in environmental water samples — for example, invasive tunicates. Our assays are currently being used by the Department of Fisheries and Oceans and provincial governments in N.S., P.E.I., N.B. and Quebec to monitor bays and rivers for the DNA of invasive species.”

In addition to monitoring how current invasive species in the region are moving from year to year, which has an impact on shellfish transfers across Atlantic Canada, these assays are also detecting new invasions.

“Assays from our laboratory were involved in the detection of three new invasions over the past 18 months of species never before detected in waters in Nova Scotia,” said Stewart-Clark. “This early detection is critically important, as discovering an invasion early in the invasion process gives both growers and government managers time to develop and implement mitigation strategies to decrease the impact that these new invasions have on Atlantic Canada.”

Prior to these DNA detection assays, invasions were only discovered once the invasive species had been present for quite some time, and adult populations had grown to sizes that were visible to stakeholders who were on the water. This made control and containment much more challenging.

The Aquaculture Genomics Laboratory is also home to the International Tunicate DNA Bank. This DNA Bank, established in 2009 and recently transferred to Dalhousie, contains samples of aquatic invasive species from all over the world, allowing researchers to prepare for and design assays for species not yet present in Nova Scotia waters. Having this collection in Nova Scotia protects Atlantic Canada from the potential impacts of new invasions.

The lab has also been successful in shellfish research. In collaboration with the Atlantic Veterinary College and Department of Fisheries and Oceans, the team has sequenced over 295 billion nucleotides for the Eastern Oyster, a species of critical importance to the aquaculture industry but with which very little genomic data is available.

This research is yielding new information on how this species deals with environmental stress events such as temperature and salinity fluctuations, as well as how these stress events impact the immune system of the Eastern Oyster.

“The ultimate goal of this research is to create diagnostic tests for the shellfish industry so that populations of oysters can be assessed to evaluate which parameters in the environment may be causing them to be stressed,” says Dr. Stewart-Clark. “This can be used by industry members to test new methods of seed collection, test new grow-out conditions, test new methods of shipping and harvesting all the while monitoring which methods cause stress to the oysters and which methods do not.”

This genomic information will be a key driver in the establishment of broodstock programs that are based on genetic selection to ensure the shellfish industry is seeded with oysters that are most likely to thrive in today’s changing ocean climate.