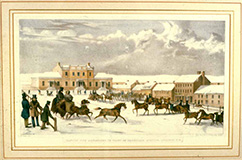 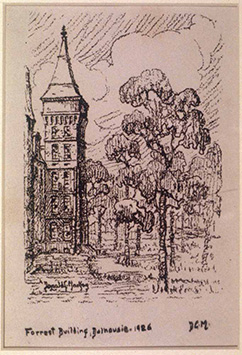 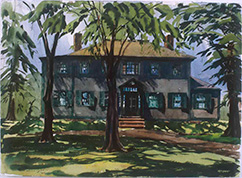 We're proud of our past and confident in our future. Founded in 1818, Dalhousie has been delivering an exceptional education for 200 years. With the addition of our Agricultural Campus in 2012, our reach continues to expand beyond Halifax and into other parts of the province.

In the early 19th century, George Ramsay, the ninth Earl of Dalhousie and Nova Scotia Lieutenant-Governor at the time, wanted to establish a Halifax college open to all, regardless of class or creed.

The spoils of war helped fulfill his dream. During the War of 1812, Castine, a small port in Maine, was being used as a base by American privateers who harassed ships along the Eastern Seaboard. Britain sent a Royal Navy force from Halifax to capture Castine and turn it into a customs port of entry. When the war ended, the navy returned to Halifax with the money it had collected as customs duties. Lord Dalhousie invested 7,000 pounds of this treasure as an endowment for the college and put aside 3,000 pounds for its construction. The earl modeled the fledgling college after the University of Edinburgh, near his Scottish home.

After the college was founded in 1818, Lord Dalhousie was appointed Governor General of Canada and left Halifax. Without his influence, the institution faltered. The first instruction was not offered until 1838. Its operation was only intermittent and degrees were not awarded for some time.

Nearly 50 years after its beginning, the college was reorganized. In 1863, Dalhousie opened with six professors and one tutor. The first degrees were awarded in 1866. The student body that year consisted of 28 students working for degrees and 28 occasional students.

Money continued to be a problem for the new institution. In 1879, it looked as though the university might fail until George Munro, a wealthy New York publisher with Nova Scotia roots, started donating to the university. Over the years, he contributed five endowed professorships and about $83,000 in bursaries and exhibitions. In 1999, the value of these gifts was estimated to be worth more than $8 million. For saving the university from closure, a special university holiday, George Munro Day, is observed the first Friday in February. Since his gift, a tradition of generosity, from donors large and small, has created the thriving university of today.

The original site of the college was on the Grand Parade, in downtown Halifax where the City Hall stands. In 1886, the university moved to the Forrest Building on today’s Carleton campus and spread gradually to occupy Studley Campus.

In the 20th century, Dalhousie grew steadily. On April 1, 1997, Dalhousie amalgamated with the Technical University of Nova Scotia (TUNS), another Halifax-based university, strengthening the university's ability to explore new applied technologies. This included a newly created Faculty of Computer Science. The name of the amalgamated institution continued as Dalhousie University.

Dalhousie continues to grow. Construction crews have been a frequent sight at Studley Campus. New facilities in recent years include the Marion McCain Arts and Social Science Building, opened in 2001, the Kenneth C. Rowe Management Building, officially unveiled in 2005, the Mona Campbell Building, opened in fall 2010, and the innovative Ocean Sciences Building, opened in June 2013. The most recent addition is LeMarchant Place, home to over 300 students and a variety of student services, which opened in September 2014.

At convocation ceremonies in October 2006, Dalhousie surpassed 100,000 graduates. The milestone came 140 years after Dalhousie awarded its first two Bachelor of Arts degrees to Joseph Henry Chase and Robert Shaw in 1866. Margaret Florence Newcombe was the first woman to graduate, with a BA in 1885, and the first black law graduate, James Robinson Johnston, graduated in 1896.

On September 1, 2012, Dalhousie entered another exciting era. The university amalgamated with the Nova Scotia Agricultural College (NSAC) in Truro—now the Faculty of Agriculture—welcoming faculty, staff and nearly 1,000 new students into the Dalhousie family.