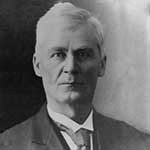 Dalhousie’s Schulich School of Law has long been known for its emphasis on public service to society. It’s called the “Weldon Tradition,” an expectation that graduates will work to improve the communities in which they practice as lawyers, as the broader systems under which they live — social, economic, legal or otherwise.

Its namesake, Richard Chapman Weldon (1849–1925), is one of the most important figures in the history of Dalhousie’s law school, serving as its first dean from 1883 to 1914. The twice-married father of 12 was also the first full-time professor of law in post-Confederation Canada and a member of parliament once considered a potential future prime minister

Born in Sussex Parish, N.B., Weldon was raised with seven siblings on a farm. A man of gentle temperament, he was tall, lean, athletic and thought to be the most brilliant student in his class. At 17, he graduated with a BA from Mount Allison Wesleyan College in Sackville, then became a popular school teacher known for his engaging personality and high expectations for his students. Weldon returned to Mount Allison to teach and earn his MA in Economics in 1870, then attended Yale College in New Haven, Conn. As one of the youngest doctoral candidates there, he studied constitutional and international law, graduating with a doctorate in Political Science at age 23.

The modern legal education we know today was decidedly in its infancy in the 1880s. Traditionally, lawyers were trained through apprenticeships, as was the practice in England at the time. The Dalhousie model, however, was pioneering, seeking to combine intellectual and practical training within a university context. As Dal’s first dean of law, Weldon’s curriculum included courses in international law, constitutional history and conflict of laws. With the encouragement of Nova Scotia’s bench and bar, Dalhousie’s model became the standard for legal education in Canada.

A versatile teacher who taught almost every subject, Weldon had a majestic, magnetic effect on his students, many of whom would later become key Canadian decision- and policy-makers. So important was his role in the school that rather than step down when he was elected as an MP, the academic year was altered to run from September to February to accommodate his time in Ottawa.

Little wonder, then, that when Dalhousie opened its new law building in 1966, it was named after its founding dean (who died in Dartmouth, N.S., in 1925 at the age of 76). And on the law school’s centenary in 1983, the school established the Weldon Award for Unselfish Public Service, honouring outstanding accomplishment by a graduate.

The award is a fitting tribute to a man who, 100 years earlier, as the school opened its doors, pledged his support for students seeking to make a difference in the world through public service. “We aim to help [them] to act with fidelity and wisdom,” said Weldon — helping spark a tradition that continues to define the Schulich School of Law through to this day.