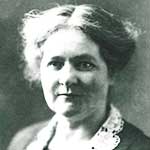 Jemima MacKenzie's (1872-1957) career began and ended in Nova Scotia, but she did her most important work more than 10,000 km from home as a medical missionary in India.

When Dr. MacKenzie was 12 years old, during a Sunday school class, she learned about the plight of women and children in India living in poverty. That experience stuck with her, all the way through her studies at Dalhousie. In 1904, she graduated as one of the university's earliest female doctors, a leader of her class in surgery, and months later was dispatched by a U.S. missionary organization to a crowded town along the banks of the Ganges River in northeast India.

The only doctor in a town with no hospital, Dr. MacKenzie — or “Dr. Mina” as many called her — worked tirelessly to train locals and set up a clinic in an old house on the outskirts of town. It was the beginning of a decades-long journey across India, during which Dr. Mina treated more than 20,000 patients, many of whom lacked even basic access to health care before. She travelled sometimes by cart but frequently by foot, horseback, elephant or camel. She carried with her medical supplies and a trusty revolver — used twice, to kill deadly snakes.

The obstacles MacKenzie faced were often severe, but she persevered with resourcefulness and compassion. She purchased mud huts near her own house where extremely sick patients could live. She fundraised to help build a hospital in Fatehpur, which continues to serve the sick and needy to this day. She even risked her own life to prevent a widespread outbreak of cholera in 1917, working around the clock to inoculate people. For her efforts, she was awarded the Kaiser-i-Hind Medal for Public Service, India’s top honour for public service.

Over the course of her 32 years in India, Dr. Mina adopted 44 children.  Some of them were infant girls who had been abandoned on the banks of the Ganges by desperate families eager for male children who could work the farm and wouldn't require a dowry later in life. Dr. Mina and some of her fellow missionaries eventually convinced the Indian government to outlaw the practice.

And when she wasn’t performing operations by candlelight or tending to her adopted children, Dr. Mina was usually performing some other act of community service. She helped set up schools and orphanages and even helped one community make a well for safe drinking water by blasting dynamite she’d procured during one of her trips home to Pictou County.

MacKenzie returned to Canada permanently in 1939, setting up a medical practice in her hometown in Pictou County. She received an honorary doctorate from Dal the next year, and her legacy of love and compassion lives on in the Dr. Mina MacKenzie Memorial Trust Fund, a registered Canadian charity set up by one of her daughters. It continues her life’s work: changing the lives of Indian children for the better.