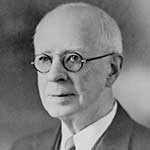 Photos of Frederic Henry Sexton (1879-1955) give the air of a refined man, with simple, thin circular glasses framing pale eyes.

Those eyes belong to an engineer, educator and college principal who spent more than 40 years watching over the halls of the Nova Scotia Technical College (NSTC), today home to Dal’s Faculties of Engineering and Architecture & Planning. How fitting that those halls, and the campus where they sit, now bear his name.

After a brief stint as an assistant metallurgist at the Massachusetts Institute of Technology (MIT), Dr. Sexton came to Halifax in 1904 to teach mining engineering and metallurgy. It wasn’t long before his prowess as a vocational educator and administrator landed him the role of founding principal of the newly formed technical college when it opened in 1907.

The first of its kind in Nova Scotia, the NSTC was established in response to the province’s need for new engineers to fill positions within the mining and steel industries booming in Cape Breton. During his early years as NSTC principal, Dr. Sexton was instrumental in establishing the first nation-wide system of technical education. He was also a foundational player in Nova Scotia’s rapidly growing industrial sector throughout the first half of the 20th century.

When shells started pummeling the muddy fields of northern France in 1939, Dr. Sexton’s knowledge of vocational education brought him into the Second World War, organizing a training program for technical personnel in both the armed service and civilian work. After the war, he spearheaded a rehabilitation program aimed at training discharged soldiers – it was the largest vocational training program in Nova Scotia’s history at the time. For his work with these wartime programs, King George VI of England awarded Dr. Sexton the honour of Commander of the Most Excellent Order of the British Empire.

Today, Dr. Sexton’s legacy lives on — and not just with his name. His tireless promotion and elevation of accessible technical education in Nova Scotia, and across Canada, shaped an impressive tradition that Dal’s programs in Engineering, Architecture and Planning programs carry forward today.