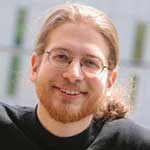 In many respects, the experience Erik Demaine (1981-present) had at Dalhousie sounds a lot like that of a typical student: hanging out with peers, hitting the books and coming out with a new appreciation for research and knowledge.

Except that Erik was 12 years old — starting a degree he would finish in only two years, at age 14.

“Every student there treated me like anyone else,” recalls Dr. Demaine, now a computer science professor at the Massachusetts Institute of Technology (MIT). “That was pretty remarkable, especially in the beginning when I was pretty short and noticeably young… but everyone treated me the same. I still have close friends from that time.”

Dr. Demaine’s path to becoming the youngest graduate in Dalhousie history, as well as MIT’s youngest ever professor (at age 20), began inauspiciously enough growing up in Halifax. But at age seven, he and his father Martin, an artistic glass blower, began travelling around the eastern United States. Homeschooled, the younger Demaine’s love of Nintendo games transformed into a passion for mathematics and computer programming. After passing a high school-level math class years before most students ever step foot in a high school classroom, he began thinking about university.

“Initially I just wanted to sit in on more interesting computer science and math classes, but at some point there was the idea that maybe I should actually enroll,” Dr. Demaine recalls. “If I’m going to be taking these classes anyway, why not take a degree?”

After returning to Halifax, a Bachelor of Science at Dal seemed the ideal option for the ambitious student — except the university had a policy at the time stipulating that students had to be 16 years old. After a lot of back and forth, a compromise was struck: he could take a few classes in the summer term and, if he did well enough, the university would allow him to continue.

He not only passed those first courses — he then took eight classes the following term, passing all of them, as well. He managed to finish his entire degree (including an honours project with faculty member Srini Sampalli) in just over two years. By the time he completed his PhD at the University of Waterloo at age 20 — winning NSERC’s doctoral prize — he’d already written 80 papers and collaborated with 90 co-authors.

Today, Dr. Demaine is renowned for much more than simply being a child prodigy. His algorithmic research (for which he’s received awards like a MacArthur Fellowship) ranges broadly, from how data structures can improve web searches to the computational difficulty of video games. He bridges the physical and digital worlds in his work on folding theory and origami, and collaborates with his father on artwork found in the Smithsonian and New York’s Museum of Modern Art. And in 2007, he returned to campus to receive a second Dalhousie degree — this one, an honorary doctorate.

“It holds a special place in my heart,” he says of his alma mater. “For me, it was maybe a little more special than for some because I was exposed to this whole new world of learning at a much higher rate than I was used to.”