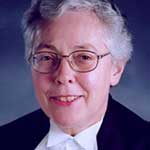 Constance Glube’s (1931-2016) legacy includes a long list of firsts within the Canadian judicial system. But to her many friends and colleagues, “Connie’s” passion for helping others, her modesty and her decisiveness shape the stories told about her.

When Glube learned about a Dalhousie Law School classmate who was struggling financially, for example, Glube quickly and quietly gave him money she received from university awards. And when she met her husband Richard on a blind date, the two married a mere three days later. (They would go on to have four children.)

These traits all came together to make Glube a diligent trailblazer for women and minorities throughout her long and victorious career. She was the first woman to oversee the affairs of a Canadian city when she became the city manager of Halifax in 1974. Three years later she made history when she was appointed to the bench as the first woman on the Supreme Court of Nova Scotia. In 1982, she was selected as the 21st chief justice of Nova Scotia, making her Canada’s first female chief justice.

All of this flowed from her time at Dalhousie Law School. Glube came to Halifax from Ottawa after receiving her Bachelor of Arts from McGill University. It wasn’t easy: she was one of only two women to graduate from Dalhousie Law in 1955 and she struggled to find work as a lawyer in Halifax after being admitted to the bar. Driven, she pushed through by working several jobs in retail until she joined the law firm of Kitz Matheson, eventually becoming a partner at Fitzgerald and Glube.

Her personal experience with gender, religious and ethnic injustices early in her career inspired Glube to fight for equality and opportunity. As her career progressed, she never lost sight of those values shaped at Dal — and never stopped pushing forward. “I worked hard because I just adored it,” she said.

Glube, who retired from the bench in 2004, received an honorary degree from Dalhousie in 1983 and was made an Officer of the Order of Canada in 2006. In 2009 the Nova Scotia chapter of the Canadian Bar Association created an award in her honour to recognize achievement in law by female lawyers — a fitting tribute to a legal leader who became not only a leader in her profession, but a role model for generations of women.

The Courts of Nova Scotia