Breathing easier: Inside the months‑long project to improve campus ventilation

Up close with a device fan. (Cody Turner photos)

In the early months of the COVID-19 pandemic, everyone was focused on cleaning: hand sanitizer supply, heightened surface cleaning and everyone washing their hands like never before.

That work never stopped — you’ll see a continued emphasis on cleaning, hand washing and widely available hand sanitizer on campus this fall. But we’ve also all spent the past year reading about aerosols, droplets and air particles, reflecting that COVID’s primary mode of spread is airborne, typically through close person-to-person transmission.

That makes ventilation a key part of Dalhousie’s multi-layer safety plan. Efforts to improve air flow within classrooms, research labs and other spaces on campus — when combined with masks, vaccination protocols and all the other layers in Dal’s plan — is part of the complete picture to keep the Dal community healthy and safe this fall.

“We’ve had a team working tirelessly on this project for months and months now,” says Darrell Boutilier, director of operations with Dalhousie Facilities Management. “It’s a small team, but it’s a very skilled and experienced team, who has managed to do a lot of work in a relatively short period of time.” 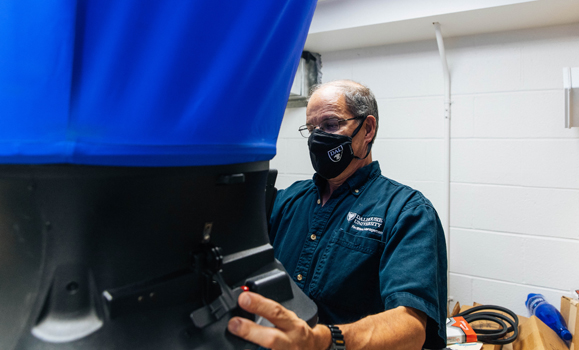 That team has been led by Kyle MacKenzie, who joined Dalhousie as a utilities manager in 2019 but was embedded on campus for four years prior as a contractor with Johnson Controls, working on ventilation and control systems. In his work with Johnson, he serviced about 60 clients across the Maritimes, and prior to that he was an operator at the Queen Elizabeth Hospital in Charlottetown, running 30+ ventilation units with different requirements.

“Compared to other facilities I’ve been at, I’d say it’s very good,” says MacKenzie, when asked to rate the condition of Dal’s ventilation prior to all this work. “I think we expected a lot more failures and issues, to be honest. But this was a great opportunity to give attention to the [air exchange] units and make sure everything was up to snuff.”

Dalhousie’s ventilation strategy was guided by current engineering best practice, as well as COVID-specific guidance from ventilation and facilities groups including ASHRAE (American Society of Heating, Refrigerating and Air-Conditioning Engineers) and APPA (Association of Physical Plant Administrators) in accordance with provincial and national Public Health guidelines.

The core of the strategy: to reduce the risk of infection from inhalation of COVID-19 by utilizing campus HVAC systems to improve air exchange rates, minimize recirculation of air and improve air filtration.

This work began in research labs, during the “Return to Research” process last summer as the university worked to safely bring as many of Dal’s researchers as possible back to their necessary lab spaces. In total, over 165 research spaces were assessed.

“Most are already well ventilated, as they have air supply systems and fume hoods required for the research itself,” explains Boutilier. “Where we found deficient airflow and had to make improvements or provide guidance, it was usually not in the labs themselves but in the shared office spaces often attached to the labs. But in general, most of our labs are very well ventilated.”

After research spaces, the next top priority for the Facilities team were the classroom spaces that, come September 2021, would be welcoming the majority of students and instructors back to in-person learning. 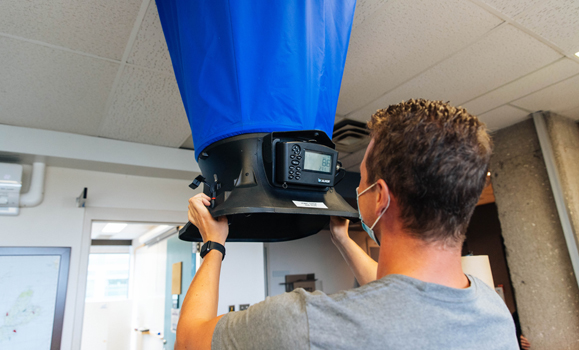 “If you look at ASHRAE, which is really our bible for this sort of work, we had quite a high percentage of classrooms that were already near the upper threshold for high-quality ventilation,” says MacKenzie. “We ended up focusing most of our attention on the ones that were older.”

Indeed, Dal’s classroom spaces are in a wide range of buildings — from newly built spaces like the Emera IDEA and Richard Murray Design Buildings all the way to the Forrest Building, which back in the late-19th century constituted the entire university campus. In total, MacKenzie’s team assessed ventilation in over 600 classroom and learning spaces. Of those, 53 were identified where air flow rate criteria were not met and remedial measures had to be taken.

“The approach to improve ventilation really varied by the space,” MacKenzie continues. “It could be as simple as rebalancing the airflow in the space, or it could be installing 50 feet of ductwork. And where none of that work was feasible, we used HEPA units.”

Those are filtration units for spaces that lack modern ventilation systems. (One is pictured below.) “They have a 99.97% filtration rate. They really take every ounce of particulate out of the air and are recommended by ASHRAE in situations where you can’t access outside air.”

Now, air changes alone don’t tell the whole story, says MacKenzie. “I’m against setting one threshold because it’s not that simple.” For example, of the few classrooms remaining with slightly lower air change rates, some have high ceilings — meaning more air space in general — while a couple others are in new buildings with some of the most high-tech air systems on campus that bring in high volumes of fresh external air (which is prioritized in industry code standards for COVID).

Classroom tips for the fall

But overall, the Dalhousie community can take confidence in just how much air exchange will be occurring in classrooms this fall. 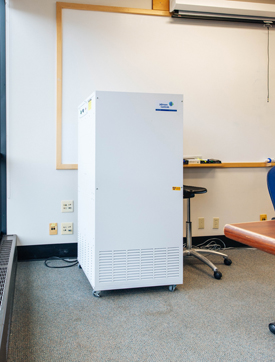 “Over 80 per cent of our classes now have more than six air changes per hour,” says Boutilier, “and we expect by the time we’re done this work in the coming days that 98 or 99% will be more than four.”

Strategies for offices and other spaces

For obvious reasons, the team’s top ventilation priorities have been the classroom and lab spaces which bring together the most people in a shared space at one time.

To ensure that other spaces also received guidance, Boutilier and colleague Craig Arthur from the Environmental Health and Safety team have been doing building tours with administrators, providing information on building systems and guidance for how best to manage particular spaces of concern.

“We’ve probably walked through every single building in the past couple of months,” says Boutilier. “With most offices, it’s a single person occupying the primary workspace space, and there are often windows for extra natural ventilation when available. So they’re significantly lower risk than shared spaces, but we’ve still made time to work with building administrators to try and educate them on strategies people can use to manage those smaller spaces.”

The arrival of students and instructors back to classrooms this September represents a big milestone for the ventilation team. 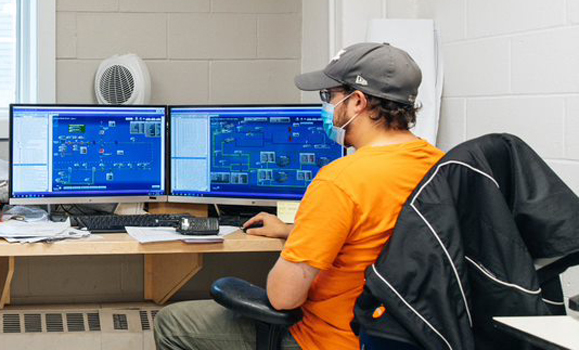 “It’s been a staggering amount of work,” says MacKenzie. “The core of our team was about three people, with other people cycled in as needed. It feels like we covered all five-and-a-half million square feet of space on campus, given how deep we were into every building.”

In addition to MacKenzie’s team, Boutilier credits the external partners involved in the work as well, including Matheson Air Balancing and sheet metal contractor Frank Cowie.

But for all the effort, it’s been a rewarding experience working to improving the safety of spaces across campus.

“We’ve had a chance to bring some team members into this work and really develop their skills,” says MacKenzie. “One guy wants to go back to school and do instrumentation now that he’s doing all this. So there’s some really good moments from all this.”