Written with contributions from staff at Dal, OTN, OFI and MEOPAR - January 27, 2021

Dal's Coastal Environmental Observation Technology and Research group now works out of a 1,880 square-foot workshop on the ground floor of the COVE south building. (Provided photo)

They’ve travelled more than 82,000 kilometres on over 100 missions, but the most notable expedition in 2020 for Dalhousie’s glider group was a trip over a Halifax harbour bridge to their brand new space at the Centre for Ocean Ventures and Entrepreneurship (COVE) on the Dartmouth waterfront.

With funding from the Ocean Tracking Network (OTN), the Ocean Frontier Institute (OFI), the Marine Environmental Observation Prediction and Response (MEOPAR), and contributions from Department of Fisheries and Oceans (DFO), the group maintains Canada’s largest operational fleet of gliders for oceanographic monitoring efforts, and to collect data for researchers studying ocean habitats and marine animal movements.

Until recently, gliders were housed in three different 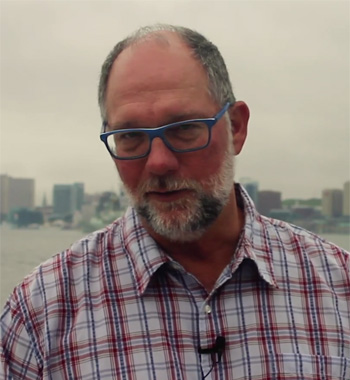 spaces: two at Dalhousie and one at the Bedford Institute of Oceanography.

“Having this COVE space is a large advancement. Before, working in three separate spaces created logistical challenges as we would often need to locate a particular piece of equipment”, says Richard Davis (shown right), manager of the Research Implementation Unit at OFI. “Now, having our office and workspace under one roof will increase the ability of the glider group to operate more efficiently.”

Moving the glider group together under one roof took a number of coordinating activities. The bulk of the funding for the renovations of the Dalhousie space at COVE came from the Canada Foundation for Innovation under the Development of Autonomous Marine Observation Systems (DAMOS) project with matching funding from Research Nova Scotia, but both OFI and OTN provided significant support to the effort.

“This is a great location that allows close ties with academia, private industry and the government agencies that now reside at COVE,” says Davis, who oversees the CEOTR team.

The 1880-square foot workshop on the ground floor of the COVE south building — which took three months to complete and is shared with the Nova Scotia Community College — is accompanied by 600 square feet of office space on the second level, a mezzanine for extra storage space and the largest industrial hoist at COVE with a 2000 kg capacity. A second, smaller hoist lifts gliders in and out of the 3m ballast tank — a big improvement over the engine hoist used in the former space. Both the hoist and the ballast tank are available to other tenants at COVE to aid in their research and development activities.

The best feature of all? It’s mere metres from the harbourfront with a fantastic view of the Halifax skyline.

“We have a 7-metre ribbed zodiac that we use to deploy and recover gliders in local waters up to 25 nautical miles off shore. While convenient there are times when we need to hire larger boats, both fishing and commercial, to safely perform our work.”

The benefits of glider technology

CEOTR uses two types of gliders: the Slocum glider, a buoyancy driven torpedo-shaped robot that  changes its density so that it either sinks or rises through the water column in a see-saw fashion. It can stay at sea for up to four months, collecting data on ocean ecosystems and sending it back to shore via satellite.

“We put a lot of different sensors on the Slocum glider, depending on who the client is and what the mission is,” says Davis. “We’ve spent a lot of time lately flying these gliders in the Gulf of St. Lawrence with hydrophones on them, listening for baleen whales, particularly the endangered North Atlantic right whale. When the glider surfaces it reports back whether it heard a whale or not. That information is sent to both the Department of Fisheries and Oceans and Transport Canada to be used in measures designed to reduce the number of whale deaths from fishing gear entanglement and ship strikes.” 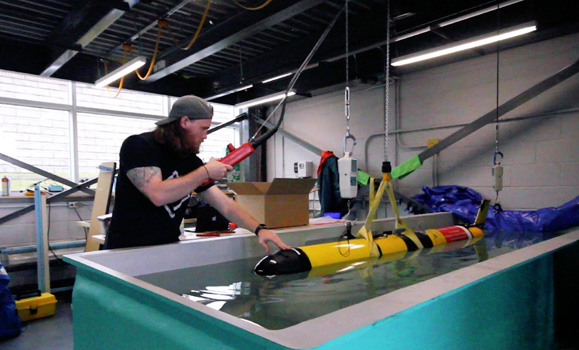 The second type of glider deployed is called a Wave Glider, which resembles a yellow surfboard covered with solar panels, stays on the surface, and harvests  wave energy for propulsion. It collects information on weather and sea-surface conditions, though its primary purpose is to offload data from bottom-moored tracking stations through a subsurface acoustic modem and to listen for acoustically tagged animals swimming through the ocean.

Gliders operate at little cost compared to conducting ocean sampling by ships. They also reduce risk for field personnel who can remotely operate the gliders from their land-based offices, and are a safe and energy-efficient tool for collecting data in the ocean. 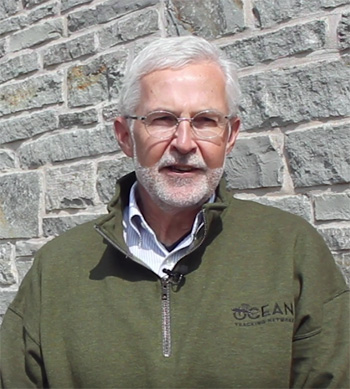 “COVE is a unique space, bringing together established and start-up ocean technology companies with academic partners and excellent facilities,'' said Fred Whoriskey (shown left), OTN's executive director. “Great synergies that are good for science and good for the Nova Scotia economy will result. We all owe a debt of gratitude to Jim Hanlon who worked tirelessly to make COVE happen.”

Despite the disruptions resulting from COVID-19, CEOTR has continued preparing the fleet to support essential training and research, and for deployment in the Gulf of St. Lawrence to assist researchers and regulatory bodies with protecting endangered North Atlantic right whales from ongoing shipping and fishing activities. The Wave Glider is also being used to service the Halifax acoustic receiver Line — OTN’s largest listening array for acoustically tagged animals — to ensure the animal tracking infrastructure is operational and to retrieve critical data.

With a new workspace, a breadth of expertise and tools, and a fleet of ocean-going robots, CEOTR is ready to ‘glide’ into action if an essential service or emergency response is required and will continue supporting research initiatives in Atlantic Canada for many missions and kilometres to come.