Dal.ca Home
Home
News & Events
January 2021
26
Inside Volume 1, Number 1: Flipping through the pages of the first‑ever edition of Dal News

Inside Volume 1, Number 1: Flipping through the pages of the first‑ever edition of Dal News

Published 50 years ago this month on January 22, 1971, Volume 1 Number 1 of University News, the predecessor of today’s Dal News, runs 20 pages and is packed with news about what was a rapidly growing campus and post-secondary sector at the time.

The coverage contained within its ink-covered pages — available “fortnightly,” or biweekly, in locations both on and off campus — tends to be meaty and serious in tone for the most part, intended to provide vital information on university objectives to a broad, public audience.

You’ll find more than 60 articles, as well as dozens of announcements and events

listings, all packaged up in classic tabloid format with charming flourishes of early ‘70s design (such as this INTRODAL ’71 graphic promoting open house on the right).

Peek into the past below to see what captivated the minds of our Dal News editorial forebears as they sent writers off to gather stories and began piecing together the pages of this debut edition. You can also view the issue online in all its sepia-toned splendour.

The 1970s was a decade of immense growth for Dalhousie in virtually every respect. President Henry Hicks, in office since 1963, had ramped up the university’s recruitment of students, faculty and researchers. And, as illustrated by the multiple pages in this issue devoted to showcasing campus construction underway at the time, the university’s physical footprint was also rapidly expanding.

Just a few of the major projects reaching fruition at the time of publication included the Life Sciences Centre (65.5 per cent complete), the Central Services Building (70.5 per cent ready), the underground tunnels (96 per cent done) and the Dalhousie Arts Centre (81 per cent finished), all buildings and pathways now considered integral to the fabric of the university (and its place in Brutalist architectural history). Stacks of the Killam Memorial Library, recently completed at time of publication, are given the panoramic treatment with a 140-degree angle shot as part of a Photonews section (see below).

Other projects touted for commencement “as soon as possible” were a “Physical Sciences Centre, a Commerce and Business Administration building, a Social Sciences complex, a Physical Education and Recreation Centre, and a Dental building.”

The Dalhousie portrayed throughout the issue in a single word? Ambitious.

“As good as a champagne christening”

That’s how a front-page piece described the performance by “the world’s foremost” double-bass player Garry Karr at the first-ever public performance in the Dalhousie Arts Centre’s “magnificent but still construction-dusty” Rebecca Cohn Auditorium.

The Arts Centre, as the above section notes, was still in the late stages of construction at the time but still managed to attract a near full house for Karr’s performance (shown below). Los Angeles-born Karr, a prize-winning performer who’d toured the world and recorded for international imprints, had joined Dal’s Department of Music as an associate professor the year before — a hint of the kind of arts talent being pulled into the university’s orbit at the time.

“Don’t be a parking hog”

How’s that for a sub-heading? An article on page 15 splashes ink on a topic that’s long been a challenge as Dalhousie’s population has grown (well, in non-COVID times at least): parking. As the main headline, “Parking: No Easy Answer,” suggests, there was, well, no easy answer

to the issues caused by the campus population boom of the late 1960s. The president of the university himself, Dr. Hicks, is quoted in the article, pledging that the university will do all it can to find ways of alleviating the parking problems and congestion in the area of campus.

“Our parking committee has given serious consideration to the problems and will continue to do so until solutions can be found,” he told the paper.

The committee had even invited a group of engineering consultants from Toronto to a meeting to discuss the subject. The group offered little in the way of concrete solutions for Dal’s immediate issue of parking on campus, emphasizing instead that “parking was only a part of the whole transportation problem” and that a comprehensive traffic-transit study was needed.

With 6,616 students enrolled in 1970-71, Dalhousie was considerably smaller at the time than it is today. For comparison, our

current enrolment sits at more than 20,000 students. But, as a short article and accompanying table show, year-over-year growth in the student body was actually quite impressive.

Overall enrolment of full- and part-time students, which at the time included numbers for the University of King’s College, was up by 983 for the year. That’s a growth rate of 17.5%.

Two Faculties in particular, Arts and Science as well as Physical Education, showed the greatest growth during the period. Dentistry was the only Faculty to show a decline, and it was a rather modest one of two students.

Dal’s campuses and buildings are to this day considered quasi-public places, with certain spaces (such as the Killam Memorial Library, for instance) open to members of the surrounding community. But in 1913, Dal’s administration took the spirit of bringing ‘town and gown’ together to the next level by offering local resident Mr. E. Waterman “pasturage of a cow for a year on the Studley campus.”  The cost: “the princely sum of $17.”

In a nod to Studley’s past as a pasture, the editors ended their debut issue with this bit of oddball history on the last page. They reproduced an official notice of payment dug up by the university’s alumni association and an image of an actual cow grazing on lush Studley green that had been take by “Enterprising Alumni Affairs staff” a few months before. Layered over the image, a wistful message: “Cows don’t eat grass on Studley anymore.”

While that may still be true of Studley today, the same can’t be said for Dal’s Agricultural Campus in Truro!

Munro Day was front-page worthy news then, too! 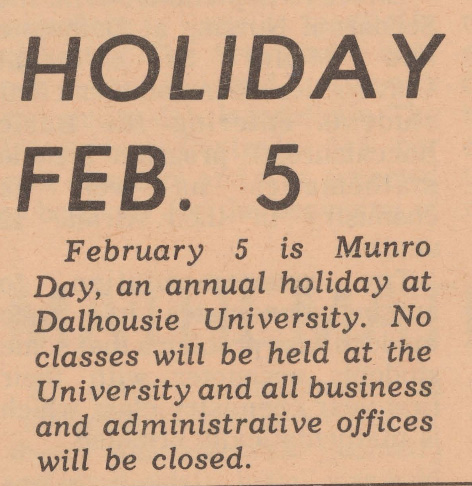 People and Places took stock of the comings and goings of faculty members and senior leaders at the time in a series of short briefs. Sort of like People Magazine, only for the university set. 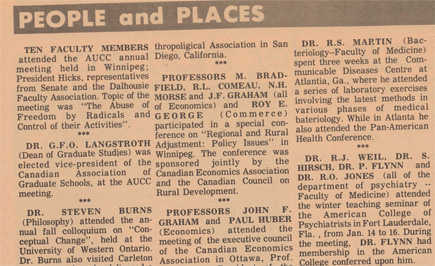 Students dressed sharply for the International Students' Association's annual soiree in the McInnes Room, where "refreshments, dancing to the sounds of Tijuana, and fine food were the order of the evening." 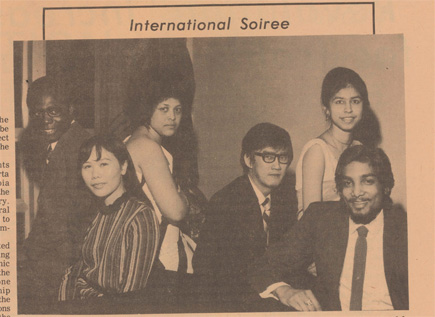 Before the Dal Events Calendar, there was the 'bulletin board' on the last page of the paper. Events for the coming two weeks were promoted, along with some basic details. 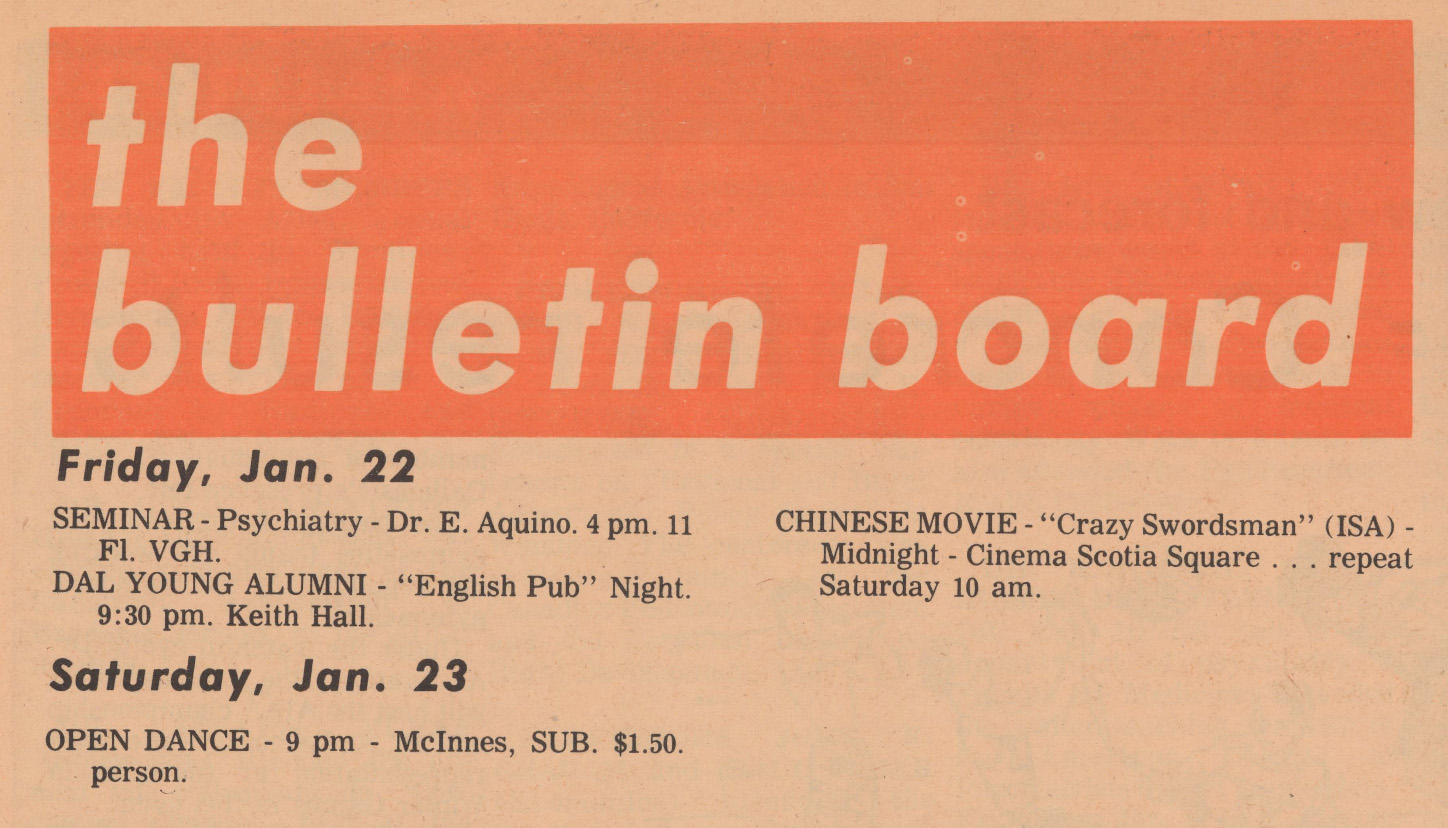 Dalhousie had an "electronic secretary," which sounds quite futuristic but was really just an automated telephone message informing callers about the daily happenings at the university. A supplementary service to the news service's aforementioned 'bulletin board," I guess. 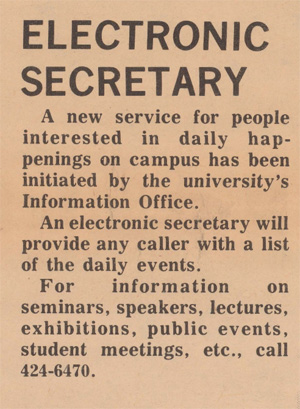