A researcher from Dalhousie is working with scientists from around the world to decode the DNA of 1,000 aquatic species — representing 500 symbiotic partnerships — in a bid to understand how these organisms have changed to depend on each other for survival.

The Aquatic Symbiosis Genomics Project will help researchers answer important questions about the ecology and evolution of symbiosis – where two different species live in close association – in marine and freshwater ecosystems at a time when biodiversity is declining at an alarming rate. 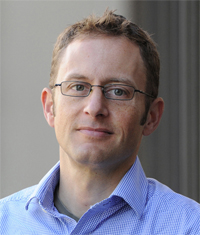 John Archibald (pictured), a professor in Dalhousie’s Department of Biochemistry and Molecular Biology, has been selected to lead one of four international teams of collaborators supported by the Wellcome Sanger Institute and the Gordon and Betty Moore Foundation. His multi-year project will focus on endosymbiosis, which involves one type of cell residing within another. Without endosymbiosis, we would not have algae, plants and trees or the oxygen they produce.

“Symbiosis is a massively important part of life on Earth, past and present. But when organisms live in close association, it can be very difficult to study them,” says Dr. Archibald, director of Dalhousie’s Centre for Comparative Genomics & Evolutionary Bioinformatics (CGEB).

“With the latest DNA analysis technologies, such as those used by the Wellcome Sanger Institute, we will be able to sequence the genomes of both symbiotic partners at the same time and then use computers to infer each of their gene sets from the resulting data.”

Symbiosis covers a spectrum of relationships, from transient to permanent, and from mutually beneficial to exploitative. For example, relationships between corals and algae are mutually beneficial – the algae receive a home and the corals get access to nutrients through photosynthesis. This collaboration forms the foundation of reef systems worldwide.

Little is known about the earliest stages of symbiosis and how the partner organisms adapt to one another over time. The Aquatic Symbiosis Genomics project will bring all the tools of leading-edge genomics to bear on these questions and benefit scientists working to understand and conserve ocean and freshwater biodiversity.

A genome is considered to be the complete genetic blueprint of an organism — the sum total of all its DNA. The project will create gold-standard genome sequences, which will be publicly available via a data platform run by EMBL’s European Bioinformatics Institute.

In addition to Dr. Archibald, the Dalhousie-led portion of the Aquatic Symbiosis Genomics Project includes CGEB members Alastair Simpson and Claudio Slamovits, as well as Norico Yamada and Peter Kroth from the University of Konstanz in Germany.

“The study of symbiosis is super important for both practical and ‘blue sky’ reasons -- think species conservation, understanding coral reefs and their decline, and better understanding the diversification of life on Earth,” says Dr. Archibald.

“Symbiosis is a key part of the way the world works, and it has always fascinated me that organisms that might otherwise be predator and prey have evolved to co-operate to survive,” says Mark Blaxter of the Tree of Life programme at the Sanger Institute and lead investigator of the Aquatic Symbiosis Genomics Project, which is being funded by the Wellcome Sanger Institute and the Gordon and Betty Moore Foundation.