How a 1,000‑year‑old tsunami in the Indian Ocean points to greater risk than originally thought

Aerial view of the field area, with the Pagani River and the Indian Ocean in the background. (Photo credit: Davide Oppo)

The December 2004 trans-oceanic tsunami, generated by the 9.2 Sumatra-Andaman earthquake, changed the way people look at the sea and was a true turning point in tsunami science. The greatest impact of the tsunami was felt in Indonesia, Sri Lanka, India, and Thailand where more than 200,000 people lost their lives.

Nine hours after that same earthquake, a tele-tsunami — a tsunami with reduced wave height and energy — hit the coastline of Eastern Africa. Heights of almost 10m were measured in Somalia, where 298 fatalities occurred. That is more than 5,000 km away from the epicenter of the earthquake. Reduced impacts were observed farther south, along the African coast of Kenya and Tanzania, likely because it struck during a low tide.

Learning more about understanding tsunami risks has global implications — but the December 2004 tsunami has been predominantly seen as an eastern Indian Ocean event, and as a consequence, much of the effort to find ancient tsunami deposits and to understand the recurrence time of such catastrophic events focused on that specific region. Tsunami risk has been considered to be low in East African countries, mainly because of the limited damage caused by the 2004 tsunami. Until now.

A recent study led by Vittorio Maselli, assistant professor in the Department of Earth and Environmental Sciences in the Faculty of Science, has identified a deadly tsunami about 1,000 years ago in Tanzania, suggesting that the tsunami risk in East Africa could be higher than previously thought. The research was published in the journal GEOLOGY.

Out into the field

Dr. Maselli, a National Geographic Explorer, first became interested in East African tsunamis began in 2016 while a visiting professor in the geology department of the University of Dar es Salaam in Tanzania.

“I was working on some field notes when I realized that no studies were dedicated to the investigation of past tsunami events in Tanzania or any other East African coastal countries,” Dr. Maselli says.

“I contacted Dr. Andrew Moore, PhD, a pioneer of tsunami science from Kent University, and within two months we were in the field together, hunting for tsunami deposits.” 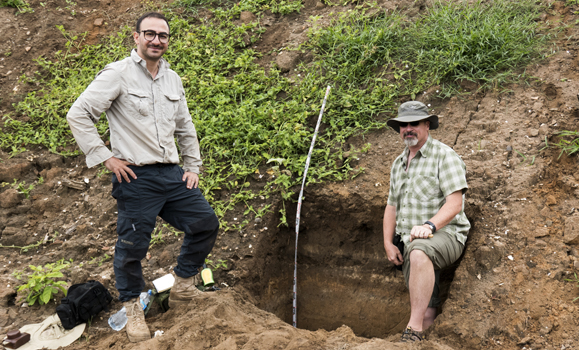 The preliminary findings resulted in a project proposal funded by the National Geographic Society and allowed Dr. Maselli to bring an international team of scientists and students to Tanzania.

“Thanks to a close collaboration with Dr. Elinaza Mjema, PhD of the Department of Archeology, University of Dar es Salaam, we visited a field site close to Pangani Bay, where we discovered the tsunami deposit,” says Dr. Moore.

At a depth of about 1.5 meters, they found a sand layer hosting human remains, lacking traditional funerary burial. The bones did not present any evidence of disease or trauma due to battle, which brought the team to think that something catastrophic occurred in that area. Dr. Maselli and his team collected many samples for characterizing the deposit and quantifying its lateral extent and age with radiocarbon dating.

A journey through history

Marco Taviani, paleontologist at the Institute of Marine Sciences, Italy, concluded that a mixed fossil assemblage indicative of continental, estuarine, and marine habitats was present within the sand layer. The occurrence of marine shells supported the hypothesis that a tsunami wave may have impacted the area. Multivariate statistical analysis applied to the grain size data, performed by Joseph Ortiz, Kent State University, highlighted that two sediment populations, one of terrestrial and the other of marine origin, were present within the deposit, again supporting the tsunami hypothesis.

Radiocarbon dating indicated that the event that deposited the sand layer in Pangani occurred about 1,000 years ago. Sedimentary evidence of paleo-tsunami deposits of the same age were reported from Thailand, India, Indonesia, southern Sri Lanka and the Maldives. 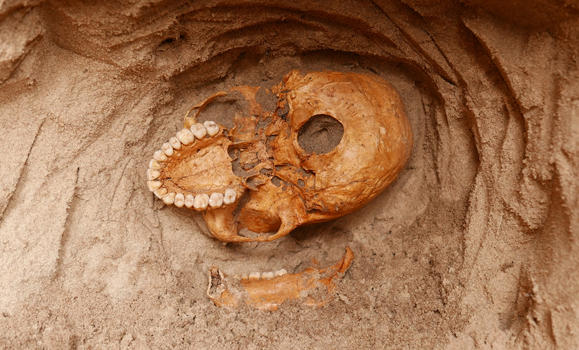 For the research team, this was the best evidence that a massive tsunami struck the western and eastern Indian Ocean about 1,000 years ago, much like the tsunami in 2004. Tsunami modelling performed by Aditya Gusman, of GNS Science in New Zealand indicated that a large rupture of the Sumatra subduction zone was the most likely source for any large, potentially devastating tsunami in eastern Africa as well as southern Asia.

The discovery of a tele-tsunami deposit in Tanzania and the associated destruction and loss of lives points to an immense need of better evaluating and preparing for the tsunami risk along the coast of East Africa.

Dr. Maselli, who came to Dalhousie in 2019, knows this is only the beginning of research in this area.

“We know that further studies that combine field observations with numerical modeling are needed to quantify the recurrence time of tsunami impacts in East Africa and to develop proper tsunami hazard and risk assessments, particularly for the mega-cities facing the western Indian Ocean,” he says, “but this is great start”.

“There are still many open questions, and I look forward to going back in Tanzania searching for additional evidence of past tsunamis. Finding precursors of the ’29 Grand Banks tsunami in our province and Newfoundland is also in my bucket list.”

This work was funded by the National Geographic Society and Dr. Maselli acknowledges support of the Canada First Research Excellence Fund through the Ocean Frontier Institute. The research team thanks the United
Republic of Tanzania and the University of Dar es Salaam for allowing them to perform the field work activity.